Docs got talent: Choir made up of physicians impresses in TV singing debut 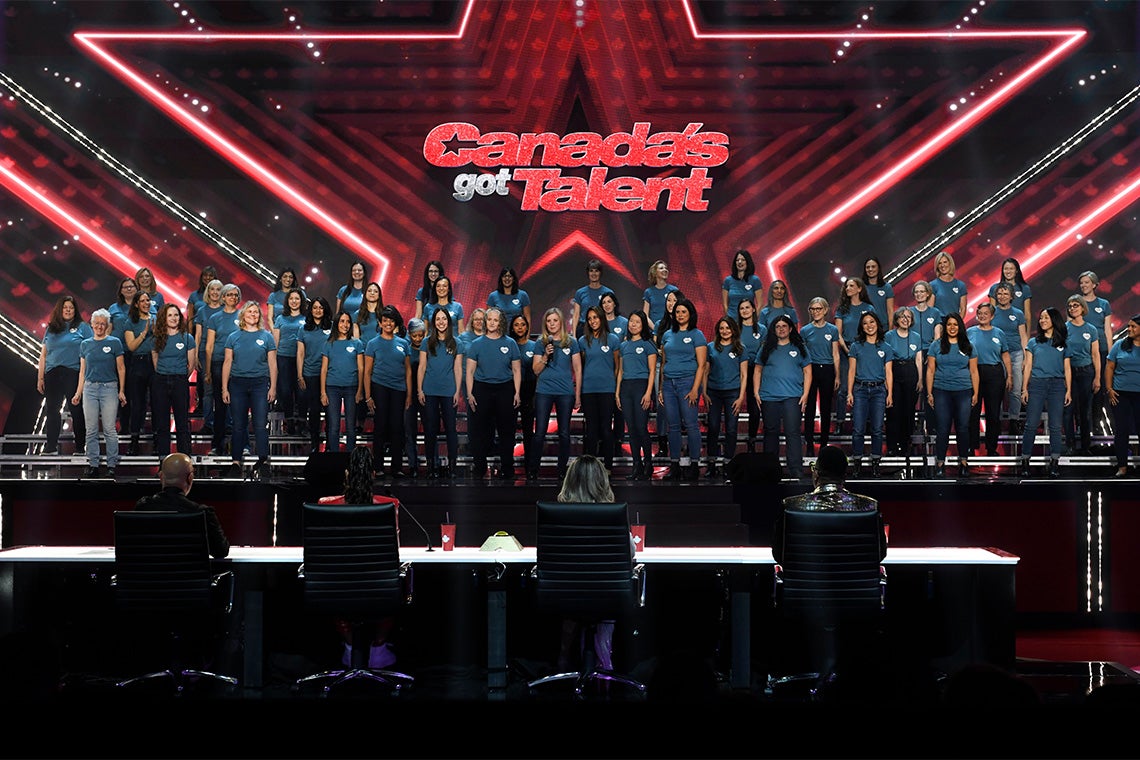 As doctors, Chetana Kulkarni, Sarah Kim and Susan Thouin are used to high-pressure situations. But they nevertheless felt an adrenaline rush while auditioning for Canada's Got Talent, singing “Fight Song” by Rachel Platten in an episode that aired last week.

The three doctors, who are affiliated with the University of Toronto's Temerty Faculty of Medicine, are part of an all-female choir of physicians called Voices Rock Medicine.

“I knew 'Fight Song' before the pandemic and it had become my anthem,” says Kulkarni, an assistant professor of psychiatry at U of T and child and adolescent psychiatrist at the Hospital for Sick Children. “But leading up to Canada’s Got Talent, we only had a few gatherings to practice outside at a distance and often in the dark. It was so powerful to be together to sing it.”

Judges Howie Mandel, Lilly Singh, Trish Stratus and Kardinal Offishall all gave the choir a “yes,” which means the group will be one of the 18 acts eligible to move forward in the competition.

“We just sang our hearts out,” says Kim, a family and community medicine lecturer and artist-in-residence in the health arts and humanities program at U of T, and a staff physician at St. Joseph’s Health Centre who is focused on sports and exercise medicine and mindful psychotherapy. “We love to sing, and we want others to experience the joy, healing and growth that we have as part of this group.”

All three physicians say Voices Rock Medicine has offered them a way to express themselves and counteract burnout.

“Singing is such a vulnerable act, but it’s easier in a group because our voices blend,” says Kim. “And as we become more compassionate towards ourselves, our ability to receive others with compassion grows.”

Voices Rock Medicine was formed in 2019, after Thouin saw how much her daughter and husband enjoyed being part of other Voices Rock choirs.

Juggling work and other responsibilities made it challenging to join her husband’s choir, says Thouin, a family and community medicine lecturer at U of T and palliative care physician at Mount Sinai Hospital. But after a series of chats with her colleagues about the pressures they face, Thouin was motivated to help them all combat stress and burnout.

She pitched her idea for a singing group of female physicians to the director of Voices Rock Canada, an organization that offers choir programs for kids, adults and seniors. She invited other doctors to join, but it took time for others to develop the confidence to take part.

“So many people said to me, ‘I can’t sing,’” Thouin recalls. “But, as our director says, he can teach anyone to sing. If you can speak, you can learn to sing.”

Prospective members don’t have to audition, and many only learned to read sheet music after joining the group.

The ensemble, which began with about 30 singers, gathered in person until the onset of the pandemic and then moved their practices online. Another 40 doctors are part of a second group that meets virtually. Today, the choir counts 60 members including doctors specialized in everything from family medicine to anesthesiology to surgery.

Despite some early recognition – a video of their virtual performance of the song “Rise Again” has more than a million views since April 2020 – none of the singers expected their music to reach such a massive audience, Thouin says.

All three physicians say music boosted their emotional wellbeing, and that the impact reverberates through their work in medicine. One choir member found herself singing softly as she did medical rounds recently, lifting her own spirits and brightening the mood of her patients, Thouin says.

“I’ve also spoken with the medical students I mentor about the choir, and how important it is to have an outlet to relieve the stress of medicine and life,” Thouin says. “Whether that’s singing or some other activity that gives you a reprieve, it’s so beneficial for preventing burnout.”

While it remains to be seen how far Voices Rock Medicine will progress in Canada's Got Talent, fans of the choir will be able to catch them live at the Jane Mallet Theatre, on May 29.