Deadly, animal-borne viruses like Nipah on the rise, U of T researcher warns 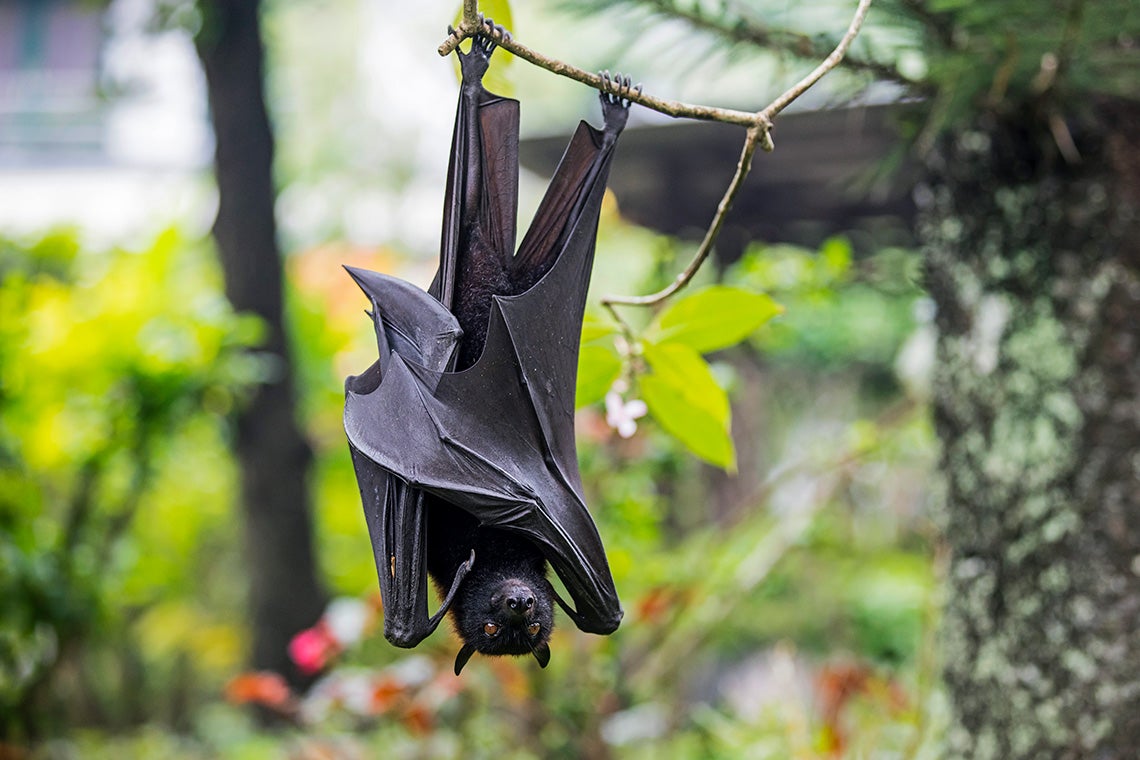 The deadly Nipah virus originates in fruit bats and, in the case of recent outbreaks, is likely being transmitted to humans via contaminated date palm syrup or fruit (Photo by: Arterra/UIG via Getty Images)

Infections like Nipah virus and Ebola have begun to appear more rapidly among human populations over the past twenty years, but experts have yet to conclude why this may be the case.

In India, the lesser-known Nipah virus has been part of a recurrent outbreak since the late 1990s, where it has a high case fatality rate of 40 to 60 per cent.

“Nipah virus is different from Ebola in that it more readily affects the lungs and the brain,” says Dr. Sharmistha Mishra an assistant professor at the University of Toronto's Institute of Health Policy, Management and Evaluation and an infectious disease physician and epidemiologist at St. Michael’s Hospital. “While Ebola attacks the organs and shuts down the body in large part due to fluid loss, Nipah can have severe neurological side effects that vary depending on how the body reacts to the virus.”

Treatment of those infected with Nipah requires intensive supportive care, but symptoms can also appear on a spectrum of severity. Some people develop only flu-like symptoms, while others can suffer seizures or end up in a comatose state.

“There is no vaccine as yet, though investigational agents are being considered,” says Mishra who is also a clinician scientist at the La Ka Shing Knowledge Institute.

The unassuming date palm fruit is the likely point of animal to human transmission of the virus in the case of the most recent outbreaks. In the country of Bangladesh, which has seen a yearly outbreak of the disease since the late 90s, the virus was transmitted to humans from consumption of raw date palm syrup or the date fruit, which can be contaminated by the saliva or urine of the fruit bat.

“The fruit bat is the animal reservoir for this particular virus, and the reason why these types of infections are known as zoonotic,” says Mishra. Dr. Sharmistha Mishra is an assistant professor at U of T's Institute of Health Policy, Management and Evaluation and an infectious disease physician and epidemiologist at St. Michael’s Hospital (photo by Rebecca Biason)

According to the World Health Organization, the Nipah virus is also considered to be an emerging zoonosis – a disease or infection that is naturally transmissible from animals to humans. Infectious disease epidemiologists are still learning about how these viruses move from animal to human, but the growing trend seems to imply that more of these outbreaks are likely to occur in the future. Humans and wildlife are coming into closer contact, through farming or abattoirs, and, in the case of Nipah, human encroachment on forest territory could be another factor in the virus’s spread.

The first outbreak of Nipah occurred in Malaysia before it spilled into Singapore in 1998.

“It spread from bats to pigs that were being farmed, and from pigs to their human farmers,” says Mishra.

The virus has since continued to resurface, often in India and surrounding regions like Bangladesh. Following a 2004 outbreak in the country, researchers worked to find out more about how the virus was spread from human-to-human.

“Person-to-person transmission in the case of Nipah is largely through respiratory secretions, like saliva and sputum (phlegm), but is usually contained to those who are caring for individuals already sick with the virus,” says Mishra. She adds that there is currently no suggestion that the virus is spreading from human to human across states in India. However, the recent outbreak of Nipah virus highlights the need for continued field epidemiology and case investigations of zoonotic infections, as well as the strengthening of front-line health care facilities for early detection of cases, and in infection prevention and control.

“We need to figure out what happened to the virus in the bats, we don’t yet know if it is another strain, and there is much to also learn about animal-to-human and human-to-human transmission,” says Mishra. Referring to the British physician who successfully traced a cholera outbreak in London in 1854, Mishra added: “The things we learned from John Snow and his work on the cholera virus in investigating outbreaks continues to be a massive part of what we do now in the field.”

Further, baseline strengthening of a country’s health-care system is also key to controlling zoonotic outbreaks and preventing further human-to-human transmissions. According to Mishra, India has more than enough expertise in this area. During the Ebola crisis, team members from the National Centre for Disease Control in India as well as members of various medical colleges, came to West Africa to provide epidemiological support.

An additional challenge that remains is communicating and working with the local panchayats, or village councils, to create awareness and address the fears and stigmas that can undermine rapid response control efforts.

“There is still a lot of stigma attached to these kinds of viruses,” Mishra says, “making individuals fearful of going to health-care facilities – especially when health-care workers become infected.”