David Naylor upbeat about research funding in Canada, gives kudos to students and researchers for #SupportTheReport 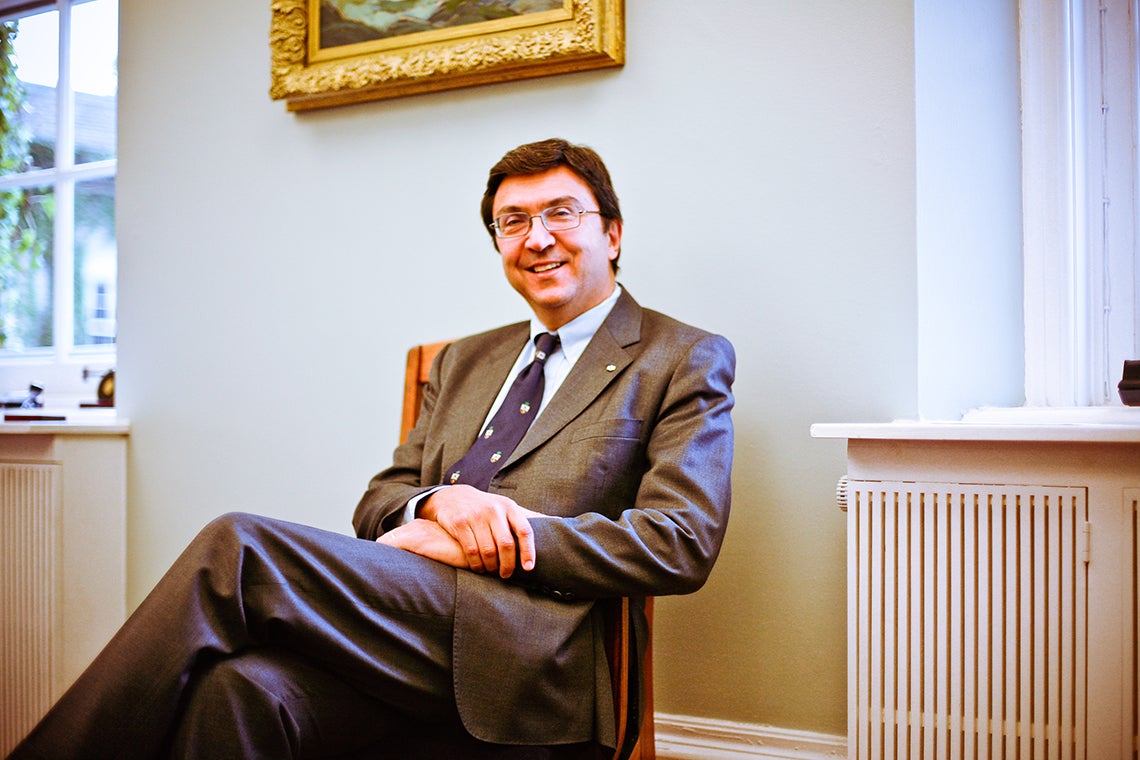 It has been a remarkable year for Dr. David Naylor, president emeritus of the University of Toronto.

A year ago, as chair of the nine-member Canada’s Fundamental Science Review panel, he unveiled a blueprint to strengthen the foundations of Canadian research at the request of federal Science Minister Kirsty Duncan. That review – the first of its kind in over 40 years – helped contribute to a historic bump in research funding contained in the recent federal budget.

He was also recently awarded the 2018 Henry G. Friesen International Prize in Health Research by the Friends of Canadian Institutes of Health Research for “major scholarly and policy contributions with a profound influence on health service delivery, public health and health research funding.”

U of T News sat down with Dr. Naylor, who also served as the dean of the Faculty of Medicine before being appointed president in 2005, to discuss what’s next for him and to get his thoughts on the importance of health experts engaging with the public, the power of grassroots activism and the status of research in Canada.

What does winning the 2018 Henry G. Friesen International Prize in Health Research mean to you?

First, it’s a humbling honour to receive an award named for Dr. Henry Friesen – a great scientist who became a research leader with remarkable vision and persuasive powers.

Second, this is also an opportunity for me to thank and acknowledge the extraordinary people with whom I’ve worked on a variety of health-related and broader science policy projects over the last 30 years. In a rational and fair universe, this award would be shared with scores of co-recipients.

In the news release announcing this honour, Dr. Aubie Angel mentioned your “capacity to analyze and unravel the complexities of the Canadian health-care system, together with the ability to communicate it eloquently and lucidly.” How important is it for health experts to explain their work to the general public?

It’s very important, but I’d say there’s been a welcome shift over the last 20 years with much better communication by experts and also a dramatic improvement in the quality of health-related and science journalism.

What worries me more these days is the extent to which digital media have enabled charlatans to promote bad ideas – ranging from anti-vaccination falsehoods to bogus treatments for a wide range of conditions. We’re in a very challenging period of widespread populist sentiment and “truthiness.”

Experts are often viewed skeptically as just another group of vested interests. We don’t help our cause when our critiques of junk science come off as smug or patronizing.

I suspect the long-term solution is a stronger public grounding in critical thinking and scientific methods at every stage of education. But for now, experts need to find ways to set the record straight in a respectful and balanced way that doesn’t further alienate fellow citizens whose disillusionment with the status quo drove them in the first place to embrace “alternative facts” about health and illness.

Speaking of digital media, you were active on social media last fall and earlier this winter to encourage people to #SupportTheReport. What did you make of the grassroots campaign?

Being part of that grassroots campaign was an exhilarating experience because of the wonderful convergence of researchers from different institutions, career stages and disciplines.

Some colleagues have generously suggested the Fundamental Science Review report and recommendations were crafted in a way that made it easy for there to be a consensus in support of its implementation. It’s actually more the other way around. Our recommendations tracked closely not only to the analyses undertaken by and for the panel, but also to the phenomenal suggestions for improvement that we received from hundreds of research stakeholders.

Within weeks of the report’s release in April 2017, it became clear the major stakeholder organizations were standing down advocacy for specific priorities and instead getting behind the case for broad reinvestment to restore the foundations of Canadian extramural research.

That cause got additional momentum with the publication of an excellent report from the Global Youth Academy released in the summer of 2017. Two outstanding mid-career Canadian scientists – Julia Baum of Victoria and Jeremy Kerr of Ottawa – oversaw that independent analysis, and it yielded findings highly consistent with those of the Fundamental Science Review report.

Another unusual and very influential part of the campaign was strong engagement by countless front-line researchers and research leaders. Institutional executives and leaders of umbrella associations are highly credible advocates, of course, but the most authentic spokespeople on these matters are colleagues who dedicate their waking hours to doing research and mentoring research trainees.

How important were students in galvanizing the research community into action? And how did using your dog for your humorous posts come into being? People loved that dog!

The activism of graduate students and postdoctoral researchers may well have been the single most important factor that tipped the balance in favour of action and investment by the government of Canada.

The #Students4theReport initiative in its various forms – postcards, letters, visits to decision-makers, social media presence – is what brought home to federal politicians the hard reality that the future of Canadian science and scholarship was being put in jeopardy by gross underfunding, uneven grant-making policies, the proliferation of boutique initiatives, administrative inertia and weak governance.

As to Oscar the border collie, I have no idea why our family pet kept taking over my Twitter account, digging material out of my computer and posting irreverent commentary.

He’s a stubborn and highly literate canine, so I gave up and just went along with it. That’s why Oscar’s photo, not mine, turns up @cdavidnaylor.

The federal government has said its recent budget contained a historic amount of funding for basic research in Canada. The funding was welcomed, but the government has yet to act on all of the recommendations in the Fundamental Science Review panel’s report. Are those recommendations now considered dead or is work continuing to ensure a fuller implementation? Is research now really on a better trajectory?

Budget 2018 was a giant step forward. It set a new course qualitatively for how the government of Canada intends to approach the extramural research realm, one that I think was widely welcomed by the research community.

I would also say the government of Canada responded in some way to the vast majority of our recommendations. Obviously, there were financial shortfalls.

The biggest source of concern to me is the pace and endpoint for new investments in funding to open grant competitions. I think the science minister and finance minister have received the same message from the research community at large, and I would be surprised if adjustments were not made on that front over the next couple of years.

In the case of personnel support for graduate students and trainees, the relevant Fundamental Science Review panel recommendation ostensibly went unfunded, but on page 89, the budget reads: “Over the next year, the government will be doing further work to determine how to better support students, the next generation of researchers, through scholarships and fellowships.” That’s a clear and encouraging signal.

Another recommendation that I believe is still alive was for creation of an improved oversight body to keep an eye on federal extramural support for research and innovation.

The government has already acted on our recommendation to wind down the Harper-era Science, Technology and Innovation Council and accepted our proposal in principle.

However, politicians and public servants are always a bit skittish about setting up high-profile standing committees that might issue reports that embarrass the government of the day. I would not be surprised then, if the new body’s mandate and authority ends up more limited than would ideally be the case – or if that one got postponed until after the election.

One recommendation that may be semi-comatose relates to federal grants to institutions that cover the so-called indirect or institutional costs of hosting research programs. We recommended a significant increase and got zero response. I now doubt there will much movement on that recommendation until the institutions, provincial governments and the government of Canada get together to figure out a fair cost-sharing formula. I hope that happens in the near future as part of renewed federal-provincial collaboration on research strategy – something we also flagged as necessary to optimize the national research eco-system.

Last, I’m encouraged by the fact that a five-year framework was delineated. Some pessimists have argued the five-year plan means research can’t get more support until Budget 2024, but I think that’s way off base.

The government has clearly shown a willingness to listen, act and invest. As I see it, the research community now has a multi-year period in which to continue making its case with a view to closing some of the gaps that remain.

And even if the government were to change after the next election, the two opposition parties have both signalled a favourable view of the Fundamental Science Review panel report and the direction taken on research in Budget 2018.

In short, more needs to be done to improve administration and governance of federal supports for research, and more investment is definitely needed. But extramural science and scholarship in Canada are in a much better place than was the case a year ago.

Are you currently conducting research, and if so what are you working on?

I don’t think what I do could really be called “conducting research” – it’s more like a random exploration of many areas of interest, all pursued in the company of smarter people who are doing most of the heavy lifting.

Among other topics, current meanderings include the Canadian content in the Gairdner prizes for health research, a review of the applications of deep learning in medicine/health care, analysis of the evolution of the federal share in funding provincial and territorial health-care spending and an exploration of the interplay of biological, behavioral and environmental risk factors for cognitive decline among Canadian seniors.

In closing, I understand the Friesen award comes with the expectation of the winner giving a talk. Do you have any ideas yet on what you'll talk about, or where your presentation will take place?

There are two components. One is a visit to Ottawa in November, with a mix of presentations to the Ottawa health research community and at the Canadian Science Policy Conference. That’s also an opportunity to meet with senior public officials and ministers. The other involves site visits to several universities across Canada. I’m still thinking through titles and topics.

The timing of the Ottawa visit is also auspicious. November 2018 is just about when Budget 2019 will be firming up. As you can imagine, I will take every opportunity on that visit to make the case for stronger federal support of extramural research – and Oscar will be barking in the background.