Clemency for Cyntoia Brown was long overdue: U of T expert 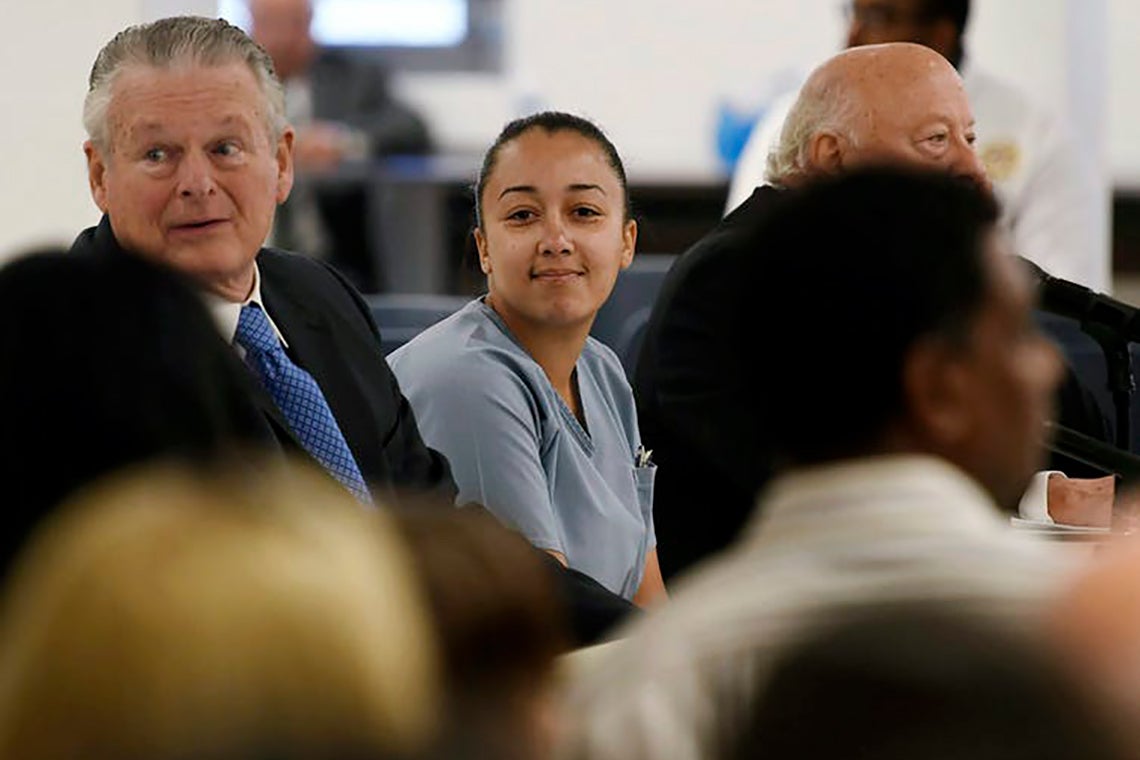 This photo from May 2018 shows Cyntoia Brown at her clemency hearing at the Tennessee Prison for Women in Nashville, Tenn (photo by Lacy Atkins /The Tennessean via AP)

(Editor's note: This article has been updated. Read the original article published on U of T News here.)

Cyntoia Brown will be released from prison in August – a surprising and welcome development in the case of a teenager who was convicted of killing a man when she was just 16 and forced into sex work.

In announcing his decision to grant clemency in the high-profile case, Tennessee Governor Bill Haslam said a recent ruling by the state’s Supreme Court that Brown must serve 51 years in prison before being eligible for parole was “too harsh, especially in light of the extraordinary steps Ms. Brown has taken to rebuild her life.”

News stories and social media have widely reported and shared Brown’s plight. Many compared her harsh sentence to lesser ones for white juveniles since the state of Tennessee first tried her case more than 10 years ago.

In 2004, Johnny Allen, 43, solicited sex in exchange for money from Brown, who was 16 at the time. Brown argued that she feared for her life and thought Allen was going to shoot her, so she shot and killed him in self-defence, according to court records. Despite these details, the state of Tennessee still tried her as an adult and convicted her of first-degree murder.

There was so much wrong about this story, which highlights the treatment of young, poor girls and women living in unstable situations. Many of these youth are regularly exposed to drugs, violence and multiple forms of trauma.

A 2011 PBS documentary about Brown’s life and trial revealed the challenges Brown faced in her young life. The documentary showed Brown, dressed in an orange jumpsuit, hair pulled into ponytails, waiting to hear from a judge to see if she would be tried as a juvenile or adult.

Her mother was raped at age 16 by an older man and she was given up for adoption. Her adoptive father routinely inflicted physical abuse on her. At 15, she ran away and met a 23-year-old drug dealer, “Kut Throat,” who raped her and forced her into sex work.

After a disagreement with him, she left and went to a local burger place. That is where she met Allen, who asked if she was looking for “action” – meaning was she selling sex? After bartering, they agreed on $150 for the “exchange.” They went to his home, ate, had sex and remained in his bed. Allen boasted about being a former soldier and said he had multiple guns in his home. He grabbed Brown and rolled over. She feared for her life, grabbed a gun and shot him.

Brown’s sentence seemed even harsher in light of the fact that the United States Supreme Court ruled it unconstitutional to give juveniles mandatory life sentences without parole. According to the Tennessee Supreme Court, Brown’s sentence fell within the parameters of the constitution because she would have been eligible for parole once she turns 67.

But thanks to the governor’s decision on clemency, she will be released from prison to supervised parole on Aug. 7 after serving 15 years.

A cycle of incarceration

Brown’s story mirrors other marginalized young women of colour living in the United States. I have conducted fieldwork with 50 incarcerated Latinas, age 12-19, in Southern California and wrote a book about their lives: Caught Up: Girls, Surveillance and Wraparound Incarceration.

The girls I spoke with often experienced abuse in their homes. They ran away to escape the abuse. They spoke about being left no choice but to engage in high-risk behaviour, including shoplifting, hitchhiking or soliciting. They were vulnerable prey for older predators who began “relationships” with them, exchanging sex for access to clothes, food and shelter. Many like the ones I spoke with end up behind bars.

Tragically, the experience of marginalized girls in the U.S. and Canada are eerily similar. The tragic stories of Cyntoia Brown and Tina Fontaine, a young Indigenous girl whose body was found in Manitoba's Red River on Aug. 17, 2014, have parallel issues despite the roughly 2,000 kilometres between Nashville and Winnipeg where they lived.

These findings are confirmed by other classic and contemporary research done with incarcerated women. What is staggering is that 82 per cent of women are incarcerated for non-violent offenses like shoplifting or using drugs.

In short, inequality, a lack of essential services and supports geared toward women help contribute to tragedy for so many poor, young women.

Ironically, when girls fight back against abuse they are often punished by authorities or others in power. If they run away and are caught by the police they are arrested, incarcerated or often returned to the very home where they experienced abuse. If they fight back against the abuse of friends, family or boyfriends they often face more mistreatment or end up behind bars.

Once incarcerated, they face a slew of interpersonal and institutional forms of abuse. For example, research shows that once young women are incarcerated they face multiple forms of violence behind bars. This includes having to fight other incarcerated individuals, experiencing violence at the hands of guards and being obligated to endure degrading strip searches. Additionally, there have been historical patterns of corrections officers sexually abusing incarcerated women.

This puts young women in a difficult position and sheds light on the immense gap in services needed. Research indicates that access to dependable and free transportation to shelters, and other supports, including outreach workers to make connections with them, are integral to young women leading healthy and productive lives.

Researchers, politicians and leaders need to address the root issues that put poor, young women in jail. These issues include rising poverty, abuse in the home, a lack of social services, inadequate education and the fact that many youth in the wealthiest countries like the U.S. and Canada still do not have access to three meals a day, a safe home, clean water and reliable transportation.

As others have accurately pointed out on social media, white men and women who commit crimes in the U.S. are given lighter sentences compared to people of colour. Jeffrey Epstein, a 54-year-old accused of trafficking underage girls, received a 13-month prison term. Brock Turner raped an unconscious woman and was sentenced to six months in jail. Teen Ethan Couch ran over and killed four people and injured several others while driving drunk and received no jail time.

Tennessee law has changed because of Brown’s case. That means minors can no longer be sentenced to life in prison. But that law did not apply to Brown.

Brown’s case attracted significant public support. The #FreeCyntoiaBrown campaign circulated widely on social media and there were plans to highlight Brown’s case along with other survivors during the annual Women’s March on Washington on Jan. 19. Coincidentally, that’s also the last day of Haslam’s term as governor.

Granting clemency for Cyntoia Brown was the right thing to do. But there are still other women incarcerated under similar conditions. It’s time we stop punishing young women for defending themselves and address the real issues that lead young women into precarious situations.

This article is republished from The Conversation under a Creative Commons license. Read both versions of the original article.