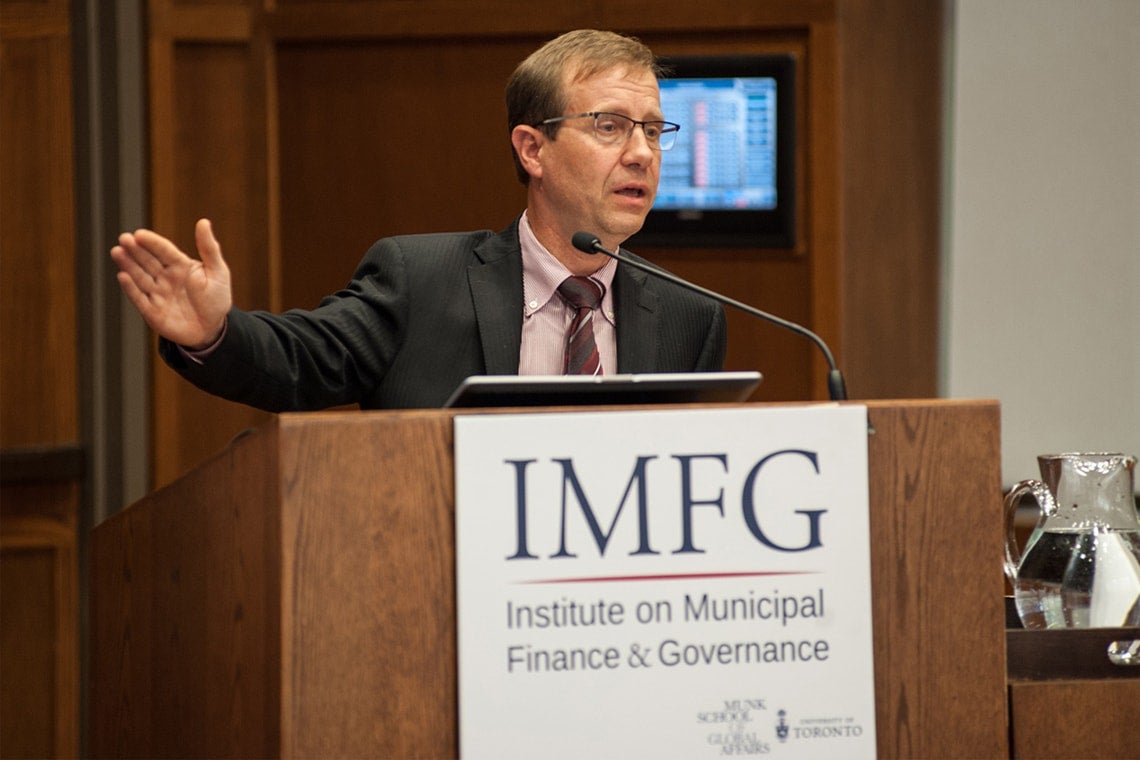 As Toronto continues to grow, so does the city’s budget pressures.

The city not only has to provide residents with public services, but it also has to invest in infrastructure – all while trying not to overspend and overpromise. That balancing act largely falls on the shoulders of Toronto City Manager Peter Wallace.

Wallace spoke this week at the annual city manager’s address, hosted by the Munk School of Global Affairs’ Institute on Municipal Finance and Governance. A U of T alumnus, Wallace, who is in charge of a city staff of 30,000 and a $12-billion operating budget, outlined Toronto’s key challenges ahead of the 2017 budget announcement.

The U of T event was moderated by former city manager Shirley Hoy, chair of the university’s governing council. She says these challenges are ones “all municipalities in Ontario, and indeed, in Canada, are currently considering.”

Here’s what Wallace had to say about Toronto’s financial future:

Projects that are funded

It’s not just a question of whether or not city staff and city council feel that we are doing the right thing. It’s really a question of are we doing the right thing, and are we conducting our financial affairs in a way that is respectful and sustainable for future generations, and in a way that actually has the impacts that we are purporting to have.

How Toronto is doing financially

I do want to emphasize that in a very fundamental way, the city is doing very, very well.

The City of Toronto is a great place to live, play, invest…We’re seeing that in terms of the economic importance in the place and just the vitality of this city. The influx of people, our ability to work together – it really is quite amazing. And, this is a town that’s booming. This is a great place at a great time.

On whether Toronto is saving enough

Last year, the City of Toronto saved $200 million. I’m proud of our system’s ability to consistently save money over a period of time.

It’s getting increasingly hard to rely on savings. Even during the peak era of [former mayor Rob] Ford, when we made savings that were clearly unacceptable to council, because it reversed itself on those at the earliest opportunities, we were not able to get savings that actually offset the overall growth in the size of the funding envelope.

Savings, austerity – absolutely a critical tool, absolutely not sufficient. It’s not the way to get out of this.

There is a core reality that for its entire history, the city council of the amalgamated City of Toronto has placed a very high priority on low property taxes, and that’s likely to continue over the next little while.

We are really, truly struggling with the demands of density and the transit associated with that, and the demands of poverty and social cohesion. We are actually ending up in a situation where we are transmitting risk across generations, across certain classes of people to whom we do not want to translate risk.

Had we actually raised property tax every year at the rate of economic growth, we might actually have that capacity. We didn’t.  We don’t. It’s a gap, and we will have to address it.

Doctors will bother people about smoking and suggest that smoking isn’t a good idea, and a lot of smokers have the idea that, ‘I’m still here. I was here last year. I’m here this year, and smoking is OK because it hasn’t killed me yet.’ The reality is, whether it’s smoking, or whether or not you live in B.C. and like to ski during avalanche terrain every winter, every day, these things are risky behaviours, and they might well catch up.

I’m a public servant, and I take risk with great seriousness. I advise that risk should be mitigated, managed and minimal. Right now, we are very heavy smokers in the City of Toronto. The sooner we quit, the sooner we step away, the sooner we restore that functionality.

We do need to have that dialogue around the sustainability of public finances, and it needs to be a realistic and direct dialogue. And the statistical evidence is, ‘I smoked this year. I’m likely to be around next year.’ Yes, of course. But that’s not really the test. The test: are you healthy, are you sustainable, is it wise, and is it appropriate management on behalf of the broader public of overall risk.

Read more about Wallace’s address in the Toronto Star