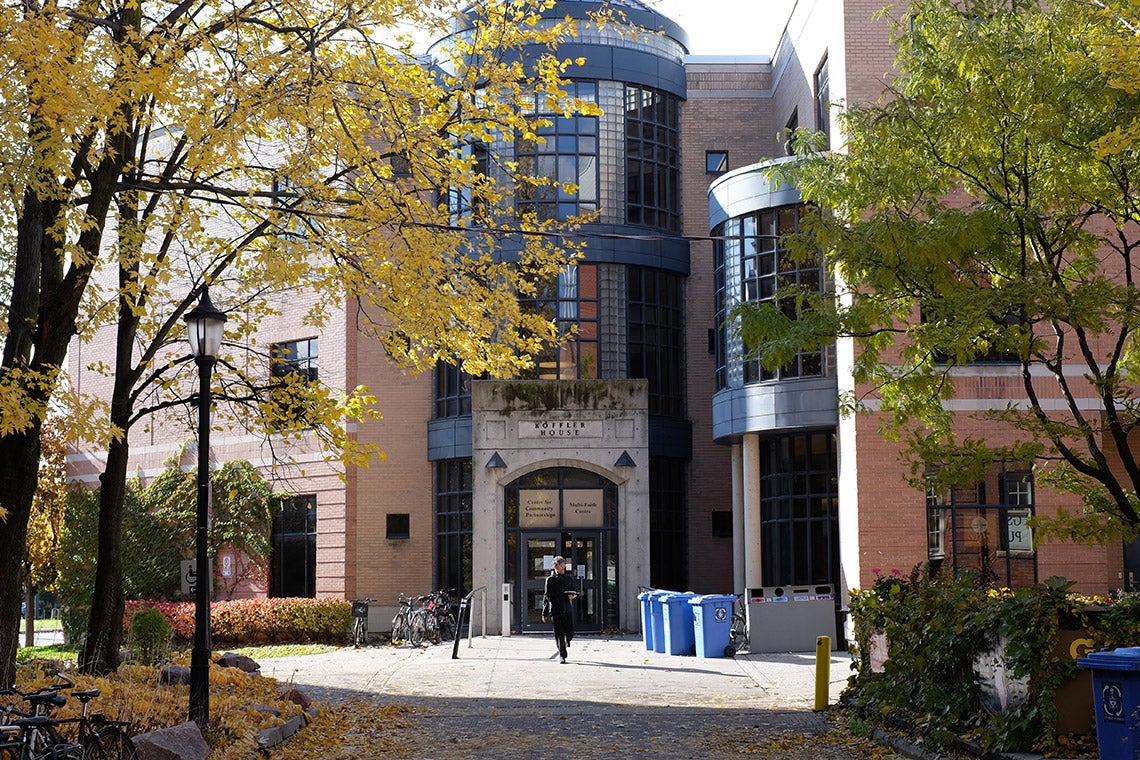 U of T's Multi-Faith Centre, in Koffler House, was founded through the effort of students who approached the university’s senior administration in the mid-1990s. It is celebrating its 10th anniversary (photo by Geoffrey Vendeville)

Those were the words of Sikh Chaplain Guru Fatha Singh as he finished the opening prayer at the 10th-anniversary celebration of the University of Toronto's Multi-Faith Centre last week. Then he asked the congregation who filled the centre to repeat the words together.

“Love to all, peace to all, life to all,” the participants recited in unison.

It was a fitting opening to an evening that featured a series of speakers, all of whom praised the role of the Multi-Faith Centre (MFC) as, in the words of founding director Richard Chambers, “a place for public discussion of spirituality and faith to affirm students’ identities on campus.”

Located on Spadina Avenue in space formerly occupied by the Koffler Institute of Pharmacy Management, the MFC was founded in 2007 as the result of students who approached the university’s senior administration in the mid-1990s, “asserting that the 12 Christian chapels on the downtown campus did not sufficiently recognize or serve the religious identity and experience of the diverse U of T student population,” as the event’s program noted.

“There were so many students from backgrounds who had not found representation on our campuses and they had to create personas that were formed to a level that others would find palatable or impressive,” says Nouman Ashraf, who was U of T’s anti-racism and cultural diversity officer at the time and is now an assistant professor, teaching stream at the Rotman School of Management.

“It was not that people were saying, ‘We don’t want to see the real you,’ but there was a sense that not all of the students’ selves were fully seen as valuable.”

Ashraf says this need to express the diversity of the student community was palpable. “When I was doing student programming, we had these dialogues across different faith traditions. This was before the MFC. We had the Spirituality and the Student Experience series and another called Food and Faith where we had 140 students in the Great Hall of Hart House. They were Jewish, Buddhist, Muslim, and Hindu – talking about what it feels like when you can’t find your kind of food on campus. We had another called the Feminine and the Divine and women spoke about being rooted in spiritual traditions but they were seeking expression outside of it. That said something to me.”

Ashraf and Susan Addario, at the time director of student affairs, joined with a large group of U of T community members to begin a process that would eventually lead to the founding of the MFC. That early group included the U of T student union, the Muslim Students' Association, the Hindu Students' Council, the True Peace Sangha, the U of T Buddhist Community, the Sikh Student Association, the Hart House Interfaith Dialogue and the Campus Chaplains Association.

“There was not only something here to build on, but we realized that if we didn’t build something purpose-built to engage these important conversations, then we wouldn’t be allowing for the expression of the full selves that make our student community the rich mosaic that they are,” says Ashraf. 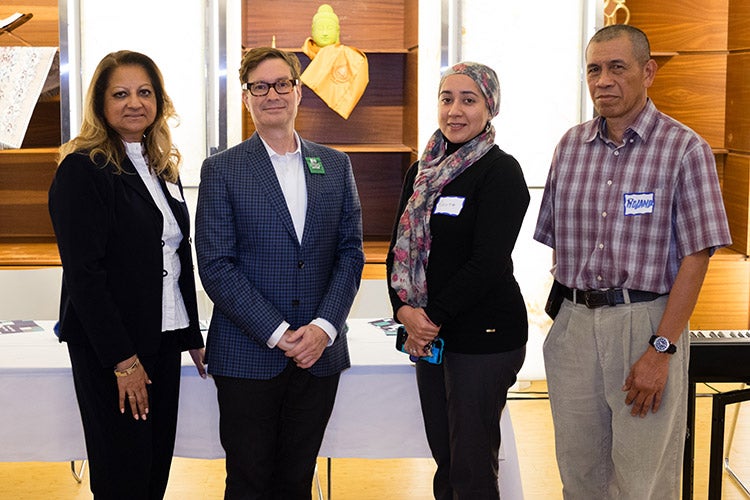 After approval of the MFC by U of T’s Governing Council, the space in Koffler House was renovated, based on a design by architectural firm Moriyama & Teshima (also known for the Toronto Reference Library). Architect Carol Phillips’ design went on to win a number of awards.

Today, 10 years later, the MFC is a beehive of activity. The mindfulness meditation program holds 20 sessions weekly and Chambers is particularly proud of the centre’s internship program, which provides students with opportunities to explore themes in community such as student identity, equity, racism, eco-spirituality, sexual orientation, gender, faith and social justice.  Opportunities occur in a variety of contexts, such as with the Muslim Chaplaincy, the Ecumenical Chaplaincy, St. Michael’s Chaplaincy and Hillel.

Andi Yumansky, who is completing her master's degree in theological studies at Emmanuel College, has been an intern supported by MFC and Hillel.

“I was given an opportunity to run a multi-faith program for Jewish students and other faith groups. I was able to run whatever programs I felt most passionate about,” says Yumansky, who will soon start a career in psychotherapy.

“That included a series related to exploring gender and religious diversity and bringing students of a multiplicity of faiths together to discuss themes around gender, and giving them the opportunity to talk about their lived experience and what it feels like to embody the religious identity that they hold. Providing an opportunity for students to do that facilitated a lot of deep learning as well as helping cultivate my leadership skills and being able to step into to my own professional identity.”

Pamela Klassen, vice-dean, undergraduate and international in the Faculty of Arts & Science and professor in the department for the study of religion, believes this ability of the MFC to bring different people together is central to the centre’s contribution.

“The importance of the space of the Multi-Faith Centre as a place to bring people from diverse traditions together, face-to-face, cannot be emphasized enough,” she told the congregation at the event.

“At a time when the agora of social media threatens to drive people apart through invective and falsehoods, the role of the university as a space in which people can come together across difference with our powers of reasoning and dispositions of respect at the fore is even more critical. The Multi-Faith Centre, as a sanctuary for spiritual practice and for experimental, critical study, justly deserves celebration for the ways that it has helped the university to live up to this responsibility.”

Susan Addario, a member of the original organizing team who attended the Nov. 5 celebration, beams when asked how she feels about the MFC 10 years later.

“I am in awe of what Richard and his team of staff and student interns have been able to accomplish since the centre opened in 2007. We envisioned the centre as making space for inter-faith dialogue and discovery, and for critical discussion of the role of religion and spirituality in current issues. But we did not imagine the impact the centre clearly has built. The level and breadth of activity in the centre is inspiring, and it's clear it has become a vital place where students are making profound connections, personal and intellectual.

“I am very proud of what the centre has become.” 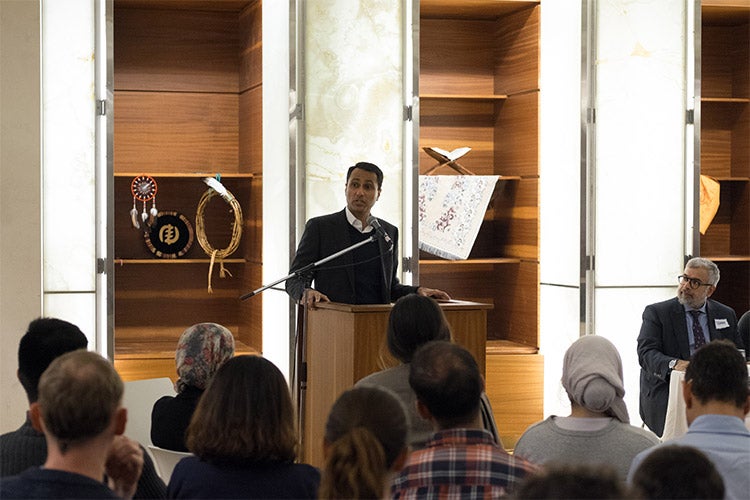 And the impact and excellence of the centre wasn’t lost on Dr. Eboo Patel, who was the main speaker during the anniversary event. Patel is the founder of Interfaith Youth Core and served on former U.S. President Barack Obama’s Inaugural Faith Council.

“Thank you for setting the standard that I will return down south and spread,” he told the audience, noting that he visits about 20 universities annually and he will be telling those he visits about the achievements of the MFC.

The anniversary evening closed with a stirring performance by U of T’s Spirit Singers. The choral ensemble of students sang I Choose Love, written by Mark A. Miller after a mass shooting where nine people were killed at Emanuel African Methodist Episcopal Church in Charleston, S.C., in 2015.