Canada Next: Richard Florida, Roger Martin and David Wolfe on getting innovation right

“We’ve had an innovation policy in Canada that’s been useless and pathetic,” Martin says 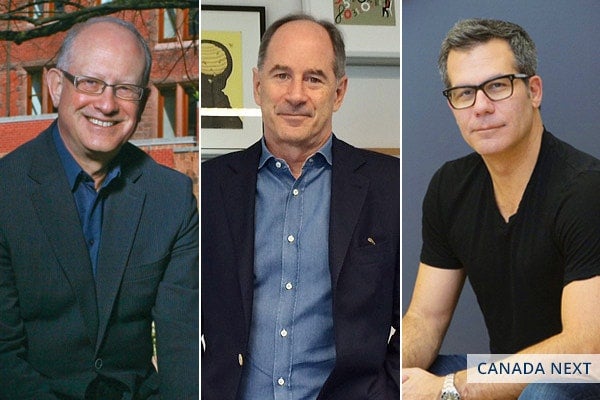 U of T experts Richard Florida, Roger Martin & David Wolfe are among those calling for a shift in the way the federal government thinks about innovation

When Prime Minister Justin Trudeau announced his cabinet, he added the term “innovation” to the title of the new Minister of Innovation, Science and Economic Development.

For U of T professors who have been calling for Canada to push hard on spurring business innovation it was an important first step.

For U of T’s key economic and political thinkers, Canada’s lack of progress on the innovation front has been frustrating to watch.

Under Florida’s Global Creativity Index, a measure of how 139 nations worldwide stack on the 3Ts of economic development – technology, talent and tolerance – Canada ranks fourth, driven largely by the country’s high performance on tolerance.

Read more about Florida's take on why Canada is behind

“But we lag much further behind on technology where we rank 13th and talent where we rank 14th,” said Florida, who is at the Martin Prosperity Institute. “On top of this, we have in effect wasted a decade under the previous Harper administration somehow believing our nation’s economic future lay in natural resources, so we have badly neglected innovation and productivity improvement, and have fallen behind even further.”

In the economic world, the term innovation incorporates more than just a breakthrough idea. It includes research and development, a new product, a new process, a new approach to sales and marketing, or even a new business.

Under the Harper administration, there was a cabinet-level position for the Minister of Industry. Innovation fell under the jurisdiction of a more junior-level Minister of State for Science and Technology.

Some have felt that was the problem.

The Trudeau government appears to have listened, putting “innovation” first in the title, signalling a more significant focus. Trudeau named Navdeep Singh Bains, the Liberal MP from the Mississauga-Malton, as the new Minister of Innovation, Science and Economic Development.

The cabinet-level focus on innovation is “what is needed,” said Professor David Wolfe of political science at the University of Toronto Mississauga.

Wolfe, co-director of the Munk School of Global Affairs’ Innovation Policy Lab, is among those who believe the problem lies in the disconnect between Canada’s research and its business innovation. He quotes the Council of Canadian Academies’ reports that say Canada is trapped in a “low innovation equilibrium.”

“[The council’s reports] say the economy specializes in too many sectors that don’t perform a lot of research and development, and don’t rely on innovation,” Wolfe said. “Plus, in those sectors where innovation is more important, we often have a heavy degree of foreign ownership like automotive where we rely on the parent companies of multi-nationals to do all the research, and all we do in Canada is production.

Wolfe says in Canada 0.9 per cent of the GDP goes to business expenditures on research and development, making it one of the lowest among the 34 countries making up the Organisation for Economic Co-operation and Development.

Martin goes back even further in time, saying Canada’s shortfalls date back to the 1878 National Policy after which we have never fully recovered, despite the Free Trade Act and NAFTA.

“We have to finally throw off the yoke of the 1878 National Policy, in which we decided to put gigantic tariff barriers up around Canada because we feared being overrun by the U.S.,” Martin said. “What that created in Canada was a mentality that said you don’t need to innovate: the smartest thing to do from a business standpoint was to wait and see what happens outside of Canada, and when it’s sure to have been successful, you then take it and do that in Canada behind a tariff wall. Unfortunately even though Free Trade came in 1989, that’s 111 years of history saying that innovation is nice to have, but not necessary.”

The next step for many will be the throne speech. Wolfe says he’ll be looking at how big a priority innovation is compared to everything else Trudeau has promised.

Munk’s Innovation Policy Lab, which has been studying digital technology’s impact on the Canadian economy, is often asked by government and industry partners to develop policy recommendations on a number of issues, including the GTA’s financial and technology sector, a report on which came out Thursday.

Wolfe says he looks forward to engaging with the new federal government on an innovation agenda.

“We now know where innovation comes from. It does not just come from great entrepreneurs or even great companies. It comes from cities.”

Part of that agenda could look at reallocating existing money, rethinking whether the government should be offering incentives for companies to spend more on research and development. Others have suggested a Canadian version of the Small Business Innovation Research program found south of the border.

Florida emphasizes that cities need to be front and centre on any discussion about an innovation agenda. He cites venture capital startup neighbourhoods in San Francisco that attract talent − and New York City and London emerging as two of the world’s leading global innovation hubs.

“We now know where innovation comes from,” Florida said. “It does not just come from great entrepreneurs or even great companies. It comes from cities, which bring talented and ambitious people, which have the openness and diversity, which spur new ideas, and which are the arenas where ideas come to mate. A successful innovation strategy must be an urban innovation strategy. Our innovation policy must recognize this and help our cities and neighbourhoods power innovation.”