Canada 150: U of T prepares to mark a big birthday 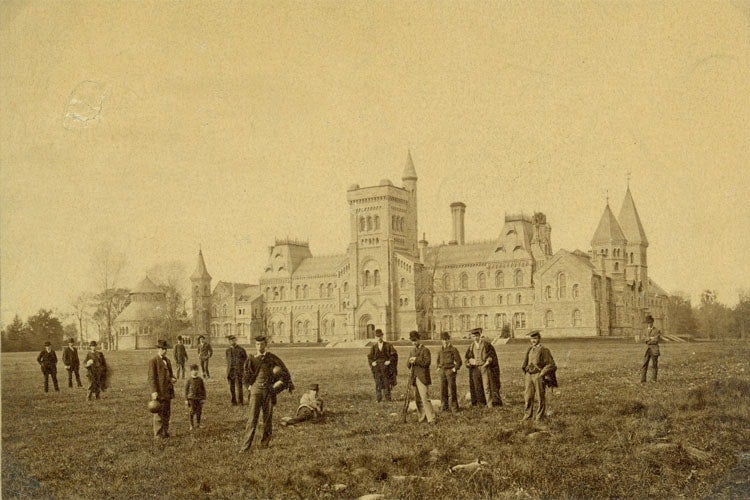 Students on the front campus, University College (1880) Photo: U of T Archives

On June 2, 1866, 28 University of Toronto students put their lives in peril to repel an attack from south of the border. Their country had not been born yet but their university had been in existence since 1827. Three of those students never came back. They died in the Battle of Ridgeway, not far from the town of Fort Erie, successfully fighting off an attack by Fenian raiders eager to seize Canada and use it as a bargaining chip with Britain to win Ireland’s independence.

About a year later, the Dominion of Canada was created through the British North America Act. Since then, members of the university community have continued to make an enormous contribution to the country. So, when Canada marks its 150th birthday in 2017, the university will be taking part in a variety of ways.

Donald Ainslie, principal of University College, is playing a key leadership role as chair of a Sesquicentennial Steering Committee formed by the university.

“The University of Toronto grew up with Canada and our rich history and the country’s history are inseparable,” said Ainslie. “The sesquicentennial gives us a chance to critically examine the country’s past, present and future and the university welcomes the opportunity to be a leading participant in these discussions.”

The U of T community is invited to join this dialogue and participate in a number of events throughout 2017. From speaker series to podcasts, hundreds of members of the university community have been developing ideas to bring to life the relationship between the U of T and Canada. Details will be released over the next few months and during the sesquicentennial year.

Many of these initiatives are being developed from two funds created by the university:

This milestone also provides the opportunity to remember university alumni and the important roles they played in the history of Canada.

Notable U of T alumni include four of Canada’s prime ministers, two governors general and 17 Supreme Court justices, all of whom had a significant impact on the country. During battles, students, faculty and alumni contributed to the national defense in two World Wars.

“The 150th anniversary of the Fenian Raids indicates the university’s longstanding role in events that affected the entire country,” said Ainslie. “The sesquicentennial will bring together the university community through our student- and faculty-led initiatives that investigate the history of the university and Canada, and how we can make a difference to our future.”

At the same time as the university prepares for the sesquicentennial, it is also participating in the nationwide dialogue generated by the federal government’s Truth and Reconciliation Commission (TRC) that investigated policies towards our nation’s Indigenous peoples. U of T has established a Steering Committee for responding to the TRC that will examine the university’s own relationship with Canada’s Indigenous peoples and will make recommendations about how best to move forward in addressing the “Calls to Action” issued by the TRC.

Read more about the TRC Steering Committee at U of T

For more information on the university’s involvement in the sesquicentennial, a dedicated website has been created to showcase the history of U of T and Canada over the past 150 years, including stories about individuals and events that helped shape the University and the country.