Highly Promising Youths: Remembering the UC students who fell in the Fenian raids 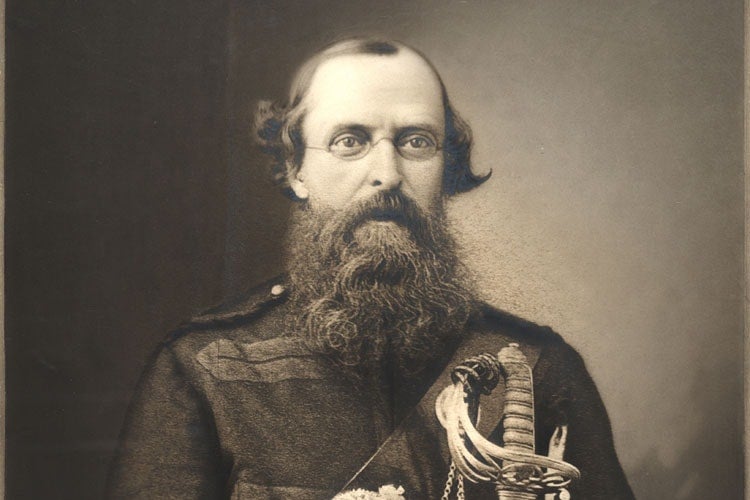 One hundred and fifty years ago this spring, 28 University College students saw military action in the defence of Canada at the Battle of Ridgeway on the Niagara Peninsula where Fenians had invaded.

As Irish nationalists, the Fenian invaders sought to seize Canada and use it to bargain with Britain for Ireland’s independence. Three of the UC students who fought at Ridgeway never came home: Malcolm MacKenzie, William Tempest, and John Mewburn. It is an appropriate time to recall the sad chain of events that led to the deaths of the three young UC men commemorated in the brilliant window in East Hall.

Canadian authorities had reports in late May 1866 that a large force of armed Fenians was assembling in Buffalo, New York, just across the border from Fort Erie, Canada. In response, on May 31, the commander of the Canadian Militia ordered troops to the Niagara frontier, including 400 men from Toronto, most of them from one of the city’s battalion’s, the Queen’s Own Rifles. As alarm bells rang out across the city early on June 1, University College students who were members of the University Rifles (Company 9, Queen’s Own Rifles) hurried to the drill shed only to be told they could not serve because their company was under-strength. The university examination period was nearly over and many students had dispersed to their homes across the province. Later in the day, however, 28 UC students, graduates, and at least one lecturer, all belonging to the University Rifles, came forward, enough for them to serve as a company. They set off for the Niagara frontier by steamboat, arriving just in time for battle on June 2.

The University Rifles had been formed five years earlier as one of many volunteer militia companies established when Britain and the United States nearly went to war over issues raised by the American Civil War. Patriotic Canadian gentlemen volunteered their own time and financial resources, and burnished their reputations, by establishing militia companies and battalions of volunteers. At UC, the catalyst for the formation of the University Rifles was Henry Holmes Croft, the professor of chemistry whose laboratory has long been known as Croft Chapter House. In a December 1861 meeting held in convocation hall (then in the east wing of UC), Croft’s patriotic eloquence induced students to form a volunteer company and to elect him as their captain and commander, and John Cherriman, professor of mathematics, as their lieutenant. Under Canada’s Militia Act, volunteers in the “active” militia got twelve days of paid training a year in readiness for call-ups in emergencies. At a time when an economizing Britain sought troop reductions and Canada lacked its own professional army, the burden of defence fell heavily on the volunteers. Students in the University Rifles enjoyed the frequent drilling and the sociability of membership in a company that brought them together with professors and alumni in a convivial club-like arrangement. None of this activity, however, prepared them effectively for the heat of battle that came with their first engagement, fighting the Fenian invaders.

The Fenian Brotherhood, founded in 1858 in New York City, rallied tens of thousands of Irish nationalists in the United States. By 1866, because so many Fenians were veterans of the American Civil War, the Brotherhood had become a potentially powerful paramilitary organization, its members battle-hardened and well armed. The faction of the Brotherhood advocating an invasion of Canada planned a three-pronged, massive attack, but the rush of events led to a hurried incursion from Buffalo. Several hundred Fenians crossed the Niagara River on the evening of May 31 and morning of June 1, 1866, quickly occupying the undefended town of Fort Erie. The next day, in expectation of Canadian troops arriving from Toronto and Hamilton, they ensconced themselves on the high ground along the Niagara escarpment near the village of Ridgeway, west of Fort Erie. From that vantage point they could see for miles in various directions and prepare for any advancing force. 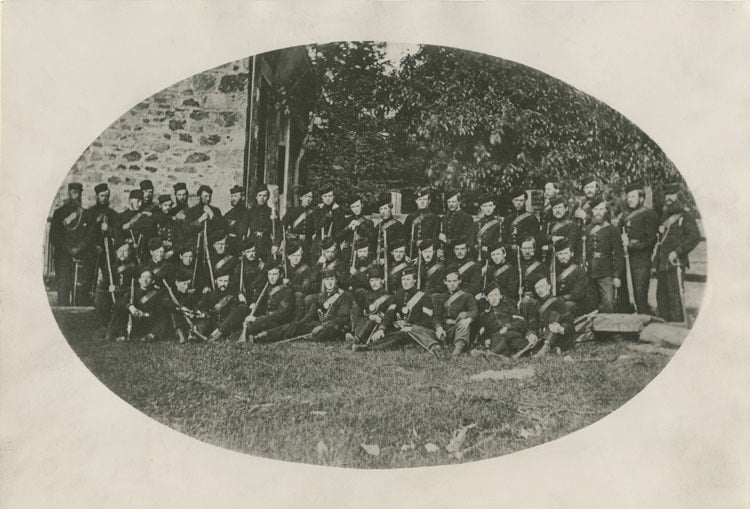 Above: University Rites at Guelph

The Canadian commanders planned to assemble all the various forces coming into the Niagara area and then over-power the enemy. However, the two battalions at Port Colborne, the Queen’s Own Rifles and the 13th Battalion from Hamilton, upon learning that the Fenians were nearby at Ridgeway, rushed to engage the enemy before waiting for reinforcements. The force lacked adequate maps, medical supplies, food, and ammunition. The commander of the Queen’s Own Rifles, Lt. Col. John Stoughton Dennis, had never exercised the troops let alone led them in battle. The University Rifles arrived without their officers, the professors having stayed behind in Toronto to finish conducting university exams. Leadership fell to an officer-cadet, George Whitney, of the Trinity College Rifles, a sister company in the Queen’s Own Rifles. The day was hot, and the men later regretted they had no water bottles, but at the start things looked propitious. “It was a beautiful day,” recalled UC chemistry student William Ellis, “the trees were clothed with the tender, delicate foliage of early summer, and the fields were green with young crops.”

The University Rifles fought on the far right of the Canadian force, the company having been ordered to clear a wood of Fenian soldiers. Enemy fire was light until the company passed beyond the wood into an open field when heavy fire rained down. Malcolm MacKenzie, a farm boy from near Woodstock, was the first UC student to fall, dying instantly from a shot through the heart. The eager but inexperienced company rushed ahead of the other volunteers through a field of young wheat interspersed with tree stumps. The men dodged whizzing bullets shot by Fenians well positioned behind a barricade of fence rails. Friendly fire came from Canadian troops to the rear who mistook the University Rifles for the enemy. It was an impossible position, made worse when the Fenians tore down their barricade of fence rails and began an all-out attack across a small field. In retreat, the University Rifles split into two groups, one running to the southeast. The other dashed to the southwest, crossing the enemy’s front line with disastrous results. William Tempest, 21, a recent UC graduate in chemistry, died instantly from a shot in the forehead. Edgar J. Paul, 19, took a bullet in his leg, as did Rupert Kingsford, 17, who was captured. Ephrain Patterson, 18, took one in the forearm, and William Van der Smissen, recently appointed a lecturer in German at UC, was shot in the groin. John Mewburn, 21, finishing his third year at UC, was injured before being captured and died in custody soon afterwards. Of all the companies serving that day, the casualty rate of the University Rifles was highest.

The situation was little better for the main body of the Canadian force in the centre of the battlefield. The flustered Canadian commander gave a foolish order, which left the troops utterly exposed to enemy fire. Then to everyone’s surprise the bugle sounded the retreat, and the militiamen scrambled from the scene as best they could. It was a rout. The next day the Fenians successfully attacked Fort Erie, where retreating Canadian troops had camped. Fortunately, however, the Fenians soon began returning across the Niagara River. Before even reaching land, many of them were arrested by US authorities for breaching the Neutrality Act. Soon the Canadians regrouped, eventually in Stratford, from where they could move readily by rail either to Sarnia or Niagara as needed. A couple of weeks later, when the Fenian threat eased, the Queen’s Own Rifles returned to a hero’s welcome in Toronto.

Immediately after the Ridgeway engagement, physicians and others from Toronto and elsewhere tended the casualties. The dead volunteers were removed by rail to Port Colborne, where Adam Wright, a member of the University Rifles, was assigned the task of identifying the bodies of his fellow students. Wright watched as William Tempest’s father, a physician who had arrived hoping to assist his son, found instead the lad’s corpse. “When he caught sight of his boy,” Wright recalled, “his anguish was terrible to behold.” Mewburn’s body was taken to his nearby home in Stamford Township. The bodies of Tempest and MacKenzie were placed in rough, pine coffins and taken to University College, where the open caskets were laid out in the undergraduate lounge (now Room A101). Faculty and students gathered to view the bodies of the two volunteers still clad in their dusty and blood-stained uniforms. Professor Croft stood bent and with tears streaming down his face, probably feeling a sense of responsibility for the grim result and uneasy because of his absence from the battlefield. Later, the bodies were taken to the drill shed on Simcoe Street where members of the public lined up for blocks to pay their respects. The day of the funerals, all business stopped in a city deeply moved by the tragedy.

Toronto newspapers did their best to present the volunteers as gallant heroes who had done their duty well as citizen-soldiers, and yet people wondered what had caused the militiamen to retreat pell-mell. Official inquiries revealed bungling at the top by officers unused to battle conditions. In any event, the city and the University preferred to focus on commemorating the sacrifices made. A public subscription raised funds to build the Canadian Volunteer Monument which, still standing impressively on the campus southeast of UC, marks the deaths of the city’s nine men who fell at Ridgeway. In 1866 the College commemorated the three students killed with a memorial stained glass window erected at the front of convocation hall and made possible by UC contributors. Destroyed in the 1890 fire, it was replaced in 1910 by the memorial window in East Hall.

To students and others directly affected, the Battle of Ridgeway was a tragedy their generation cast as gallant service to an emerging nation. Many people at the time must have doubted whether the students had been adequately trained and responsibly led, but it was easiest for them to fall back on Victorian rhetoric of heroism and sacrifice. In 1866 a senior militia officer put it thus:

The fallen were gallant, valiant, true-hearted Christian soldiers, who fell as soldiers ought to do in the foremost of the fight, battling for the noblest cause for which it is possible to fight or bleed or die – their honour, their country, and their Queen.

Sadly it would not be the last time UC students would fall in the service of Canada. But it was the first time. 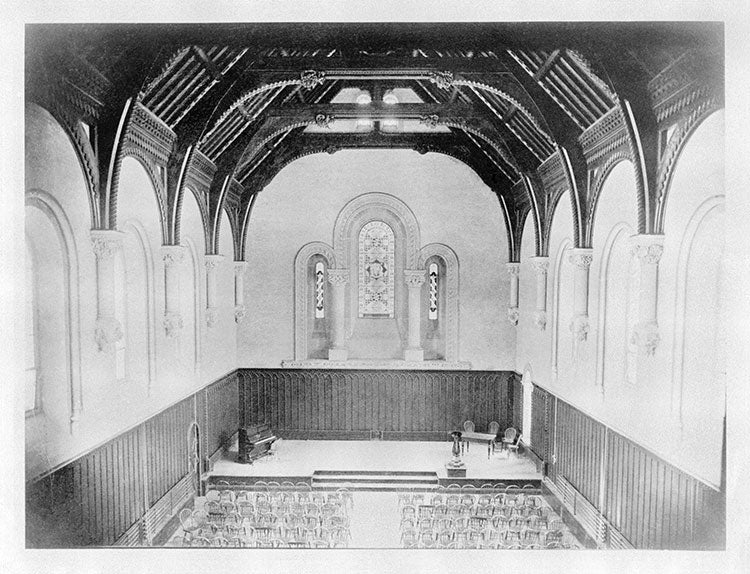 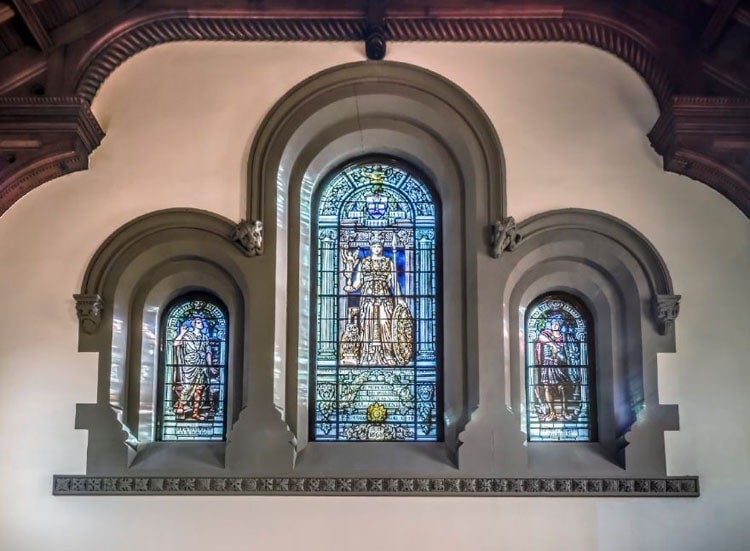 (This article was reprinted with permission from UC Magazine)