Can blood be used to predict age-related diseases? U of T researchers bet it can 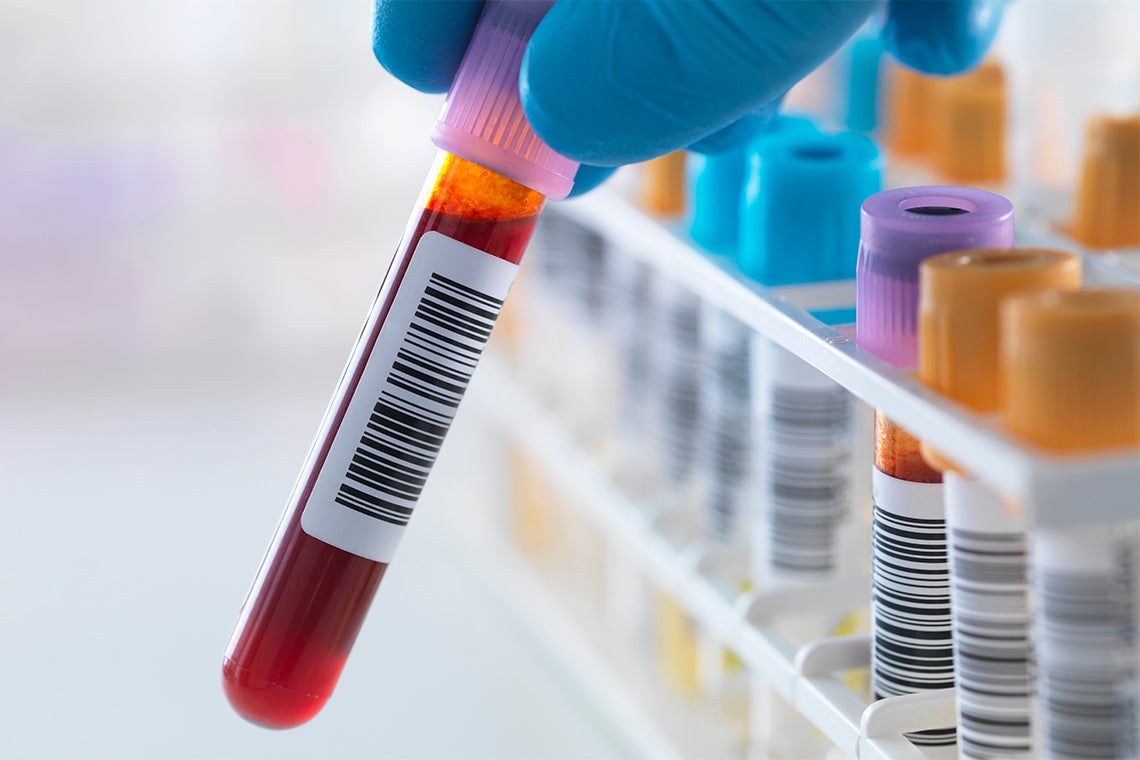 How much can a simple blood sample tell us about a person’s health? Can it give clues about whether a person will develop cardiovascular disease or leukemia? Can it predict how severe a person’s heart disease will be?

John Dick, senior scientist at Princess Margaret Cancer Centre, University Health Network (UHN) and a professor of molecular genetics at the University of Toronto’s Temerty Faculty of Medicine, believes it can – and, together with a multi-disciplinary team, is coming up with a method for monitoring blood for markers of disease.

He says the simplicity of the approach makes this a low-risk, but potentially high-impact, project.

“Blood is easily accessible. Taking a blood sample is not invasive like having a biopsy, for example,” Dick says. “The overall potential impact of our research would be to have a way to pre-screen patients using a detection tool we developed to identify those at risk for development of cardiovascular disease and other inflammatory diseases of aging.”

Dick’s lab has shown that aging blood stem cells acquire mutations that proliferate and begin to make up a large proportion of all blood cells – a process called “age-related clonal hematopoiesis,” or ARCH. Dick and other researchers have uncovered evidence that some of these mutated cells contribute to inflammation, which in turn leads to diseases of aging. While Dick’s team is currently focused on cardiovascular disease, he says the project could apply to any degenerative disease of aging.

The project’s multi-disciplinary team of investigators has two major aims. The first is developing ARCH genetic biomarkers that can predict cardiovascular disease risk. To do this, the team is studying large populations of blood samples. Dick is working with Temerty Faculty of Medicine co-investigators Assistant Professor Phyllis Billia, a cardiologist and director of research at the Peter Munk Cardiac Centre at UHN; Professor Philip Awadalla, director of computational biology and senior investigator at the Ontario Institute for Cancer Research, and Assistant Professor Sagi Abelson, a scientist at the Ontario Institute for Cancer Research.

Separately, Dick is collaborating with Gary Bader, computational biologist and professor at the Donnelly Centre for Cellular and Biomolecular Research, Temerty Faculty of Medicine Assistant Professor Steven Chan, scientist at the Princess Margaret Cancer Centre, Professor Mathieu Lupien, a senior scientist at the Princess Margaret Cancer Centre; and Assistant Professor Slava Epelman, a scientist at the Toronto General Hospital Research Institute and staff cardiologist at the Peter Munk Cardiac Centre. They are using techniques such as single-cell sequencing –  a method of studying cells at the individual level – to determine how a blood stem cell with ARCH contributes to the progression of cardiovascular disease.

Some of the investigators working on this project – Awadalla, Bader and Lupien – have also been involved in an international partnership, led by Dick, with the University of Cambridge and the University of York. The strategic collaboration seeks to accelerate the global understanding of how normal human hematopoietic stem cells are regulated and how leukemia develops, and includes an exchange program for PhD students.

The team is one of 11 sharing nearly $21 million in funding from Medicine by Design over three years. Funded by a $114-million grant from the Canada First Research Excellence Fund, Medicine by Design is a strategic research initiative that is working at the convergence of engineering, medicine and science to catalyze transformative discoveries in regenerative medicine and accelerate them toward clinical impact.

Dick’s team is currently in the process of analyzing blood samples taken from large population cohort studies. They are looking at samples from patients both with and without cardiovascular disease. DNA extracted from those blood samples are run on an ARCH-detection platform built in the Abelson lab, which identifies connections between the presence of ARCH and markers of cardiovascular disease.

Dick is world renowned for his research on normal and leukemic stem cells, which he has studied for 30 years. His team project builds on his important discovery that normal blood stem cells can mutate and start proliferating years before leukemia is diagnosed. The discovery was the catalyst to the finding of ARCH.

“We have been collecting samples from patients for quite a few years. We have upwards of 13,000 patient samples,” Billia says, adding that the team is studying these samples to understand if there are markers in the blood that can predict severity of illness.

As a clinician, Billia says she can see this work being translated to have an impact on the way people are treated for cardiac disease.

“It could change how we would potentially think about – and treat – patients earlier on in their disease progression. We can monitor them at an earlier state and make more accurate predictions. We can go back a few steps when we see people in clinic and say, ‘We have to be extra cautious with you.’”

Billia did a PhD focused on stem cells and she says she was enthusiastic when the biobank team at UHN linked her to Dick.

“When I learned about the project, I had so many ideas. I’m really excited about this team because my gut says we are going to find something,” Billia says.

Dick credits Medicine by Design for providing the mechanism and resources to grow this team, which not only includes scientists, but clinicians like Billia and Epelman.

“Our new collaborations in the cardiac community are very exciting,” he says. “Thanks to Medicine by Design, we now have the opportunity to engage with people who bring new perspectives and innovative ideas on how we can work together to impact regenerative medicine with this knowledge.”