The brain’s frontal lobe could be involved in chronic pain: U of T research 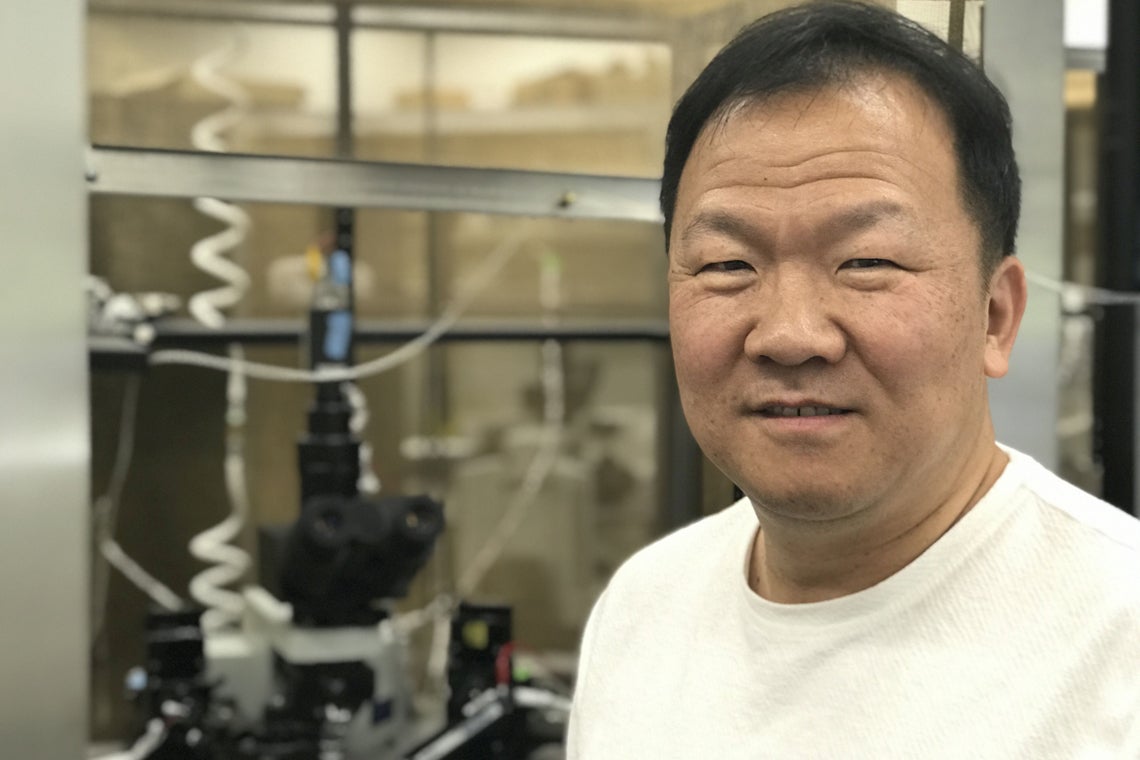 Professor Min Zhuo has been studying invisible pain for the last two decades. He has discovered the brain's frontal lobe may be involved in chronic pain

A University of Toronto scientist has discovered the brain’s frontal lobe is involved in pain transmission to the spine. If his findings in animals bear out in people, the discovery could lead to a new class of non-addictive painkillers.

For 20 years, Min Zhuo, a professor of physiology in the Faculty of Medicine, has been intrigued by invisible pain, in particular chronic pain with no obvious cause. He has long suspected that the standard way of viewing spinal pain – it must come from injury or tissue inflammation – and the usual understanding of how to treat it – block it from entering the spinal cord – wasn’t telling the whole story.

Now, Zhuo has shown in mice and rats that some spinal pain actually begins in the brain’s frontal lobe, an area previously thought to be uninvolved. And he has shown how treating the pain in this area could be effective at preventing chronic pain. Zhuo published his results May 16 in the journal Nature Communication.

“When doctors can’t see anything wrong to cause chronic pain, often they think patients are making it up,” says Zhuo. “But pain that originates in the frontal lobe would be very different from pain that comes from a physical injury, like a herniated disc. There wouldn’t necessarily be any injury to see. That’s because our personality and emotions live in this region. If the frontal lobe can produce physical pain, that pain would be deeply tied to emotions like anxiety.”

Scientists already knew that the prefrontal cortex was in some way involved in pain because it would light up in scans of people in pain. But that activity was always thought to be symptom not cause, says Zhuo.

“When you have extreme anxiety, more neurotransmitters are released that end up causing pain in the spine,” he says. “Normal functions like walking shouldn’t be painful. But this flood of neurotransmitters sends the spine into hyper drive, and it starts treating ordinary sensations like pain. That could explain why anxiety can cause chest pain and make you think you’re having a heart attack. Or why some people experience pain when you touch them. I believe this helps to explain why emotional pain causes physical pain.”

The good news is that pain from the frontal lobe seems to be transmitted in a simple, direct way to the spine – making it relatively easy to shut down. Neurons in the frontal cortex send signals all the way down the spinal cord, says Zhuo, whereas pain signals from other areas of the brain are mediated by a complex network.

In animals, Zhuo found that pain was associated with increased neurotransmitters released from the frontal cortex. He was able to lessen pain by reducing the amount released. His next step is to test this process in people.

Those who suffer from anxiety along with neuropathic pain would likely benefit from a painkiller targeting the frontal lobe, says Zhuo.

The research was supported by the National Key Basic Science Research Project and the Natural Science Foundation of China.