Bob Rae on his role as Canada's special envoy to Myanmar 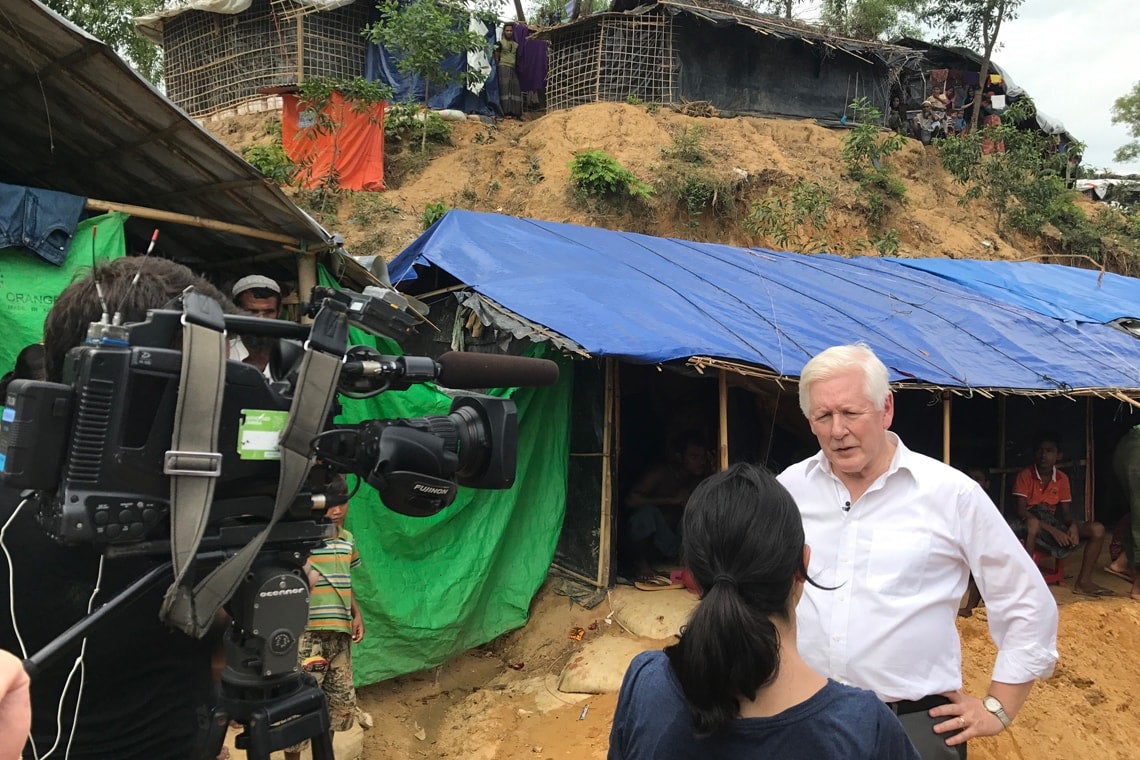 During his trip to Myanmar as Canada's special envoy, Bob Rae visited members of the growing Rohingya refugee population in neighbouring Bangladesh (photo by Maxime Lauzon-Lacroix)

Ahead of his interim report on Myanmar to the prime minister’s office, special envoy Bob Rae says he remains hopeful the Rohingya crisis can be resolved.

Just this week, United Nations human rights chief Zeid Ra’ad al-Hussein said the exodus of more than 625,000 Rohingya Muslims driven out of the Buddhist country of Myanmar into neighbouring Bangladesh in late August could amount to genocide.

In an interview with U of T News, the former Ontario premier and former interim leader of the federal Liberal party, who teaches at the Faculty of Arts & Science, reflected on his fact-finding mission last month to Myanmar (formerly known as Burma), his initial take on the complexity of the conflict and his observations from a recent meeting with the country's leader Aung San Suu Kyi and Prime Minister Justin Trudeau.

Suu Kyi, once portrayed as a democratic hero who made great personal sacrifices to guide her people from dictatorship to democracy, is now widely criticized for standing by quietly during the military’s campaign against the Rohingya, and then denying the atrocities had occurred. Despite calls for her honorary Canadian citizenship to be revoked, Rae does not believe such action is needed, and that the controversy actually distracts from the issue.

“I’ve always believed that conflicts have a resolution, but in order to get there, you’ve got to understand better that different parties have different narratives or different explanations for what the problem is,” he said.

“You have to start from the premise that a solution is possible. It doesn’t mean it’s easy, or it’s going to be quick. But it starts with a few human footsteps – that’s what we have to figure out, how to make that happen.” 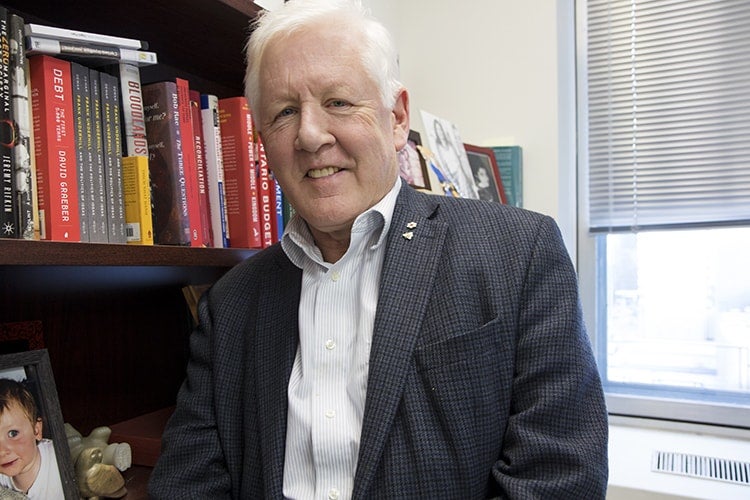 Alumnus Rae, who teaches a policy analysis class in the first-year Vic One program, was appointed by Trudeau in October to advise on the Rohingya dilemma.

He’s been directed to focus on the humanitarian challenges faced in the refugee camps both in Myanmar and in Bangladesh, to better understand the root causes of the conflict that led to the mass Rohingya exodus, and to make suggestions on what Canada and the international community can do to help find solutions and look into allegations of brutal human rights abuses.

Weighing in on Suu Kyi’s honorary title was not part of the mandate, he said.

“My own personal view is that it was given to her on the basis of the extraordinary work she did in fighting for the transition to democracy and ending military rule,” Rae said. “I don’t think this is the time for getting sidelined by issues that I consider to be symbolic only.”

Rae is set to submit an interim report to Trudeau before Christmas. He believes that an advisory commission, headed by former UN secretary general Kofi Annan and partially funded by the government of Myanmar, is a good place to start building a peace agreement.

Rae began his role with a meeting in early November with Trudeau and Suu Kyi, whom he had previously met on her state visit to Canada over the summer. The 45-minute meeting, ahead of the Asia-Pacific Economic Cooperation trade talks in Vietnam, was a chance for the prime minister to voice concerns over Suu Kyi’s perceived inaction, but it was also a moment to hear her out, Rae said.

“It was a private meeting, but it was very candid. We listened carefully to her,” he said. “The prime minister spoke very directly to her about the evidence of the number of people leaving and the deep concern we had about the conditions that would lead people to make the decision to leave, or to be forced to leave, and the ongoing political issues underlying the conflict.

“She was very direct about the challenges that they faced. She insists in any conversation that I’ve had with her that she’s a strong supporter of the peace process and a strong supporter of reconciliation. Where the future of the Rohingya fit into that is something that we need to continue to work on.” 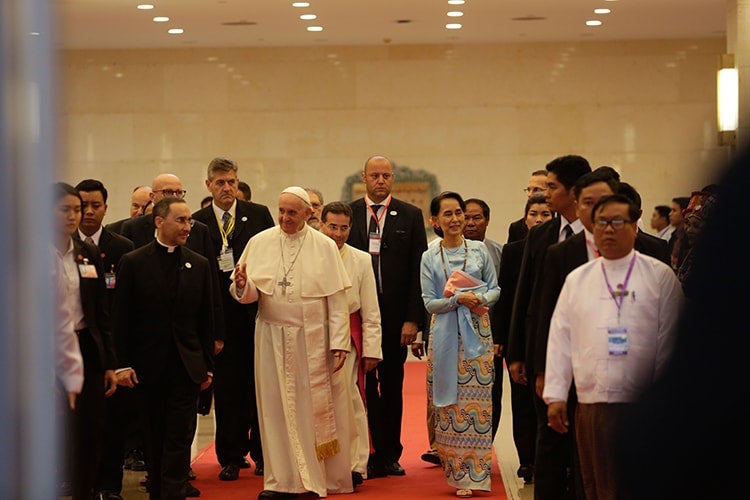 Sympathetic with the challenges Suu Kyi faces, Rae talked about the military, which has run the country since 1962 and still controls the most powerful institutions while Suu Kyi is limited in her role as state counsellor.

“She’s become the public figure,” Rae said. “You must not assume that means she has infinite power and infinite control over what happens because she doesn’t.”

During his trip to the region in mid-November, he got a taste of how hotly contested the facts are in this conflict.

“What is straightforward is that 625,000 people have left since the end of August, but people can’t even agree on that. There are people inside Myanmar who insist the number is nowhere near that great, but those are the UN numbers. Beyond that, there isn’t necessarily much agreement on why did they leave, what were the circumstances under which they left, what is the underlying cause of the problem, how do we overcome it.”

He says he heard from victims about atrocities they faced in Myanmar's Rakhine state, but his training as a U of T law student taught him to be careful about the facts – that allegations can often differ from what is finally determined to be true.

“There are many, many allegations of horrific violence, loss of life, and physical violence against women, including rape and other human rights abuses. I heard personal stories from women and men about the circumstances under which they left, what happened to them and the violence that was done to them,” Rae said. “I don’t think anybody would take the initial report of the government of Myanmar or the military saying nothing happened. These are allegations that cannot be ignored and have to be examined in greater depth.”

The UN Human Rights Council is expected to release a report in March on its own fact-finding mission looking at the allegations of human rights abuses in Myanmar.

Rae said even the term Rohingya is under dispute. Suu Kyi avoided using the term, Rae said as did the Pope on his trip to Myanmar last month.

Gya means “from,” and Rohing comes from Rohang or Rohan, meaning the Rakhine or Arakan state during the 9th and 10th centuries, so the name implies a territorial claim by the Muslim minority, which says it has a deep historic link to the country and therefore deserves constitutional recognition, Rae said. The country, meanwhile, considers the Rohingya foreigners returning to where they came from. 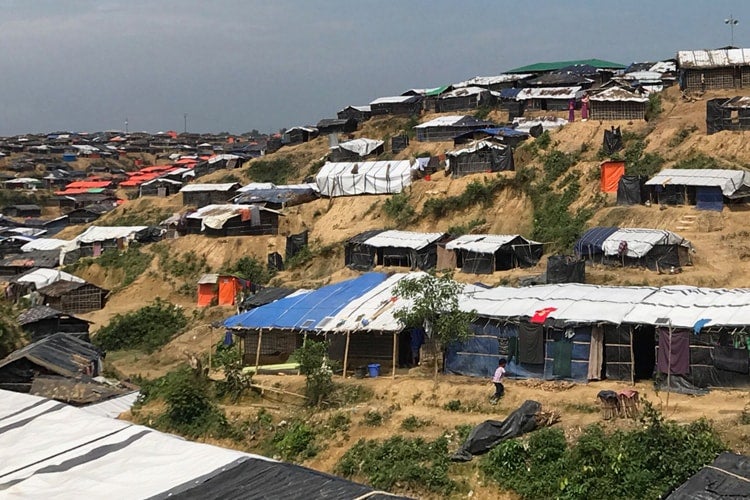 Bob Rae visited the refugee camp in Cox’s Bazar, Bangladesh, and met with members of the Rohingya people who have fled persecution, as well as those providing aid (photo courtesy of Bob Rae)

While Rae did not get to enter Rakhine state, he did travel to nearby Yangon here a non-governmental organization held a dialogue that brought in both sides from Rakhine. The rules of the dialogue were you can’t get angry or insult the other side.

“It would be very difficult to have a conversation like this in Rakhine state,” Rae said. “It’s not something people want to see happen.”

He also travelled to a refugee camp in Bangladesh where he met with government officials. The situation in the overflowing camps could become worse during the spring with the onslaught of monsoons, Rae said.

In January, he hopes to return to the region to visit refugee camps in Bangladesh and maybe this time get the chance to meet with the military leadership. He will submit a final report to the prime minister shortly thereafter.

Rae, who wrote a book in 2011 called Exporting Democracy on the difficulties and dangers of taking democracy to foreign lands, says we need to keep in mind that there’s a difference between democracy and a liberal or federal democracy, which is more representative.

“We need to understand that there’s a powerful ethnic nationalism that’s at work in many, many parts of the world, including in Myanmar. That ethnic nationalism can actually be fuelled by the forces of populism and democracies as broadly defined. We define democracy as including the rule of law, and various liberal expressions. But if you take democracy as simply being the will of the majority of the people, that can often lead in all kinds of directions.

“The majoritarian principle doesn’t always lead to a protection of civil liberties or to a respect for minorities. One of the underlying challenges that Aung San Suu Kyi has is not simply dealing with the military. It’s dealing with majoritarian opinion in her country and how they see this issue and how they feel about it. That’s one of the things that makes it so complicated.”

Read more on the Rohingya crisis