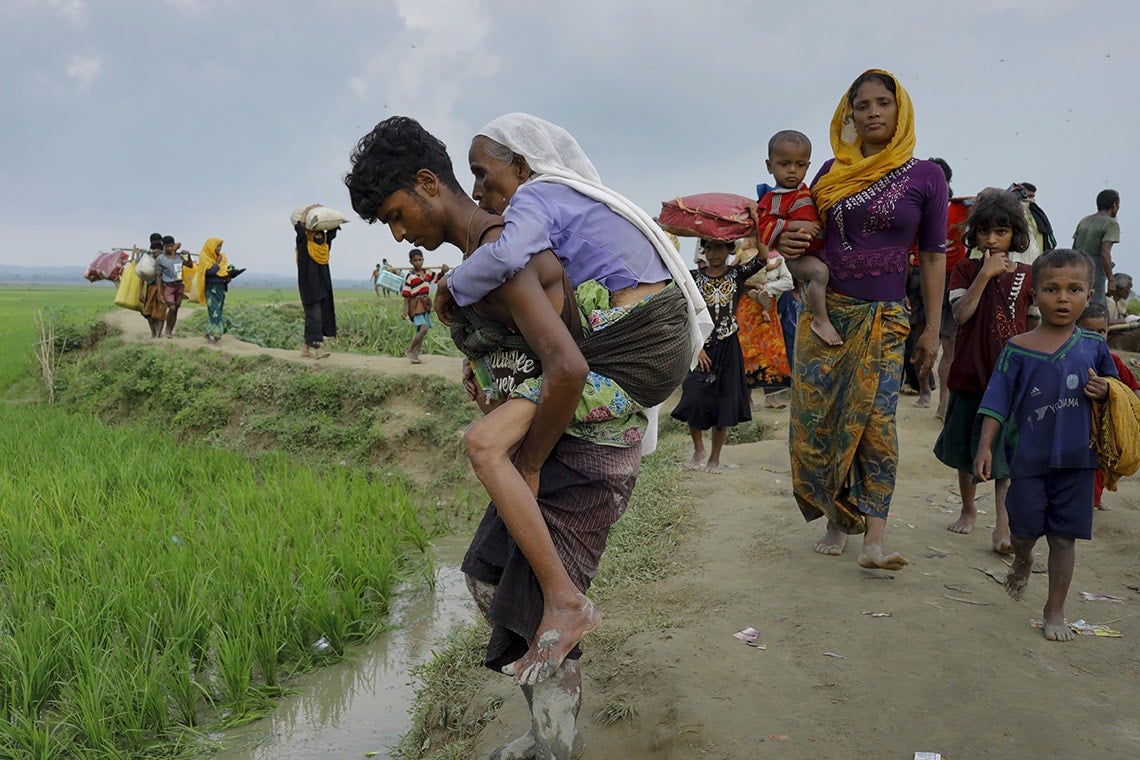 As more than 146,000 Rohingya have fled violence in Myanmar, crossing into neighbouring Bangladesh, reports have emerged of mass killings and villages being burned.

In turn, she has blamed “terrorists” for “a huge iceberg of misinformation” about the violence in Myanmar. The United Nations secretary general has warned that the operations could verge on ethnic cleansing.

U of T News spoke with Jacques Bertrand, a political science professor at the Faculty of Arts & Science and a member of the Centre for Southeast Asian Studies at the Munk School of Global Affairs, about the crisis, which he says “clearly looks like ethnic cleansing.”

But he warns that sanctions against Myanmar may not be the right solution.

“Canada and the world should continue to condemn the situation, create pressure through the United Nations and continue to press the Myanmar government through diplomacy,” he says. For those of us who are trying to understand what is taking place in Myanmar with the Rohingya, can you summarize what’s going on? Why is Myanmar targeting the Rohingya? Who are the Rohingya?

The Rohingya are a small, Muslim minority in the north of Myanmar on the border of Bangladesh. They have been there for several generations – many of them had settled at the time when Myanmar was part of the British Empire, and borders with India were basically open.

There were several periods in the last few decades when the border was relatively porous, with movements back and forth, despite the fact that Myanmar was closed off in the first decade or so after a military coup by Ne Win in 1962. So there are a few layers to the issue.

First, under Ne Win’s government, a large number of Indians were expelled (they had occupied many positions in civil service and the private sector under British colonial rule). Although many remained and their descendants have been in Myanmar for generations, the original policy and campaign against Indians appears to be part of the origins of a xenophobic, nationalist culture that continues to permeate Myanmar. Second, over the years and to this day, there are strong sentiments against now mostly Muslims from South Asia. As a group, they are different from the Rohingya, but there is a layer of anti-Muslim sentiment running through the population. Third, at the local level, there were prior violent campaigns against the Rohingya, with one important one under the military regime that pushed many of the Rohingya toward the north of the state of Rakhine. There's quite a lot of talk about the Rohingya taking jobs away from local Rakhine, while others mention that the Rohingya worked mainly in jobs that Rakhine people would shun. The fact is that they were well integrated economically.

This balance changed when the government began democratizing in 2011. Under the 2008 constitution, Myanmar began to give more powers and resources to the state level and, if negotiations are successful with ethnic minority groups, states such as Rakhine might become even more powerful. It became a perfect storm where local politicians began to fear that the Rohingya could gain power in Rakhine state or, even worse, be sufficiently numerous to ask for some level of autonomous governance within Rakhine. It gave birth to a strong Rakhine nationalist party whose interests against the Rohingya coalesced with those broader sentiments that permeate the armed forces and the population at large. It led to the 2012 large-scale violence against the Rohingya that began the exodus across the Bangladesh border, the forced relocation of Rohingya into a very small part of Rakhine state, strong restrictions on their mobility and livelihoods, and terrible conditions.  Today’s violence is simply a new stage that continues the violence since 2012. There was violence that erupted last fall. Why has this latest violence erupted?

The catalyst this time was the attack by Rohingya militants who, understandably, have been trying to fight back, as support from abroad has long waned after the media frenzy in 2012. This gave an excuse to raise the level of violence to what amounts to ethnic cleansing and likely an attempt to force most or all of the Rohingya to flee across the border.

There have been calls for Aung San Suu Kyi to give up her Nobel Peace Prize. Why has she not spoken out against the violence?

The main reason why Aung San Suu Kyi has remained silent refers back to the factors I explained earlier. Over time, and to some extent with roots in the early forced deportation of Indians after the coup, combined with the growth of Burmese nationalist rhetoric, there has been very deep-seated anti-Muslim, anti-Rohingya feelings that are widespread in the population across Myanmar. As a result, Aung San Suu Kyi is stuck, politically. If she condemns the violence against the Rohingya, and is perceived to be protecting their status, she will lose lots of support in her party and the population at large. She has also been forced to tread carefully with the military, as they continue to be above the law, so she is not willing to risk her political capital and the fragile balance she is trying to maintain with the military in order to protect the Rohingya. It must be very difficult for her, as I would doubt that she personally condones the violence. She has been a defender of human rights in her country. She actually did condemn the violence in 2012 but was widely criticized for doing so in Myanmar. So, political interests have trumped her track record on human rights. 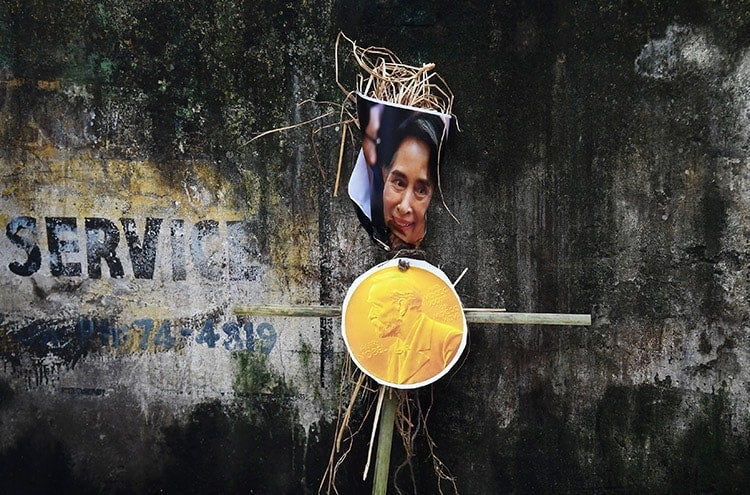 Have Buddhist monks also participated in the attacks?

All religions condemn violence. Yet, all religions have their radical movements where religion is used to target minorities and condone violent acts. We see it at different times in every major religion, and Buddhism is no different. Why monks?  I have written an article that argues that monks were at the forefront of the 2012 violence because it is in their personal interest to do so. In highly decentralized religions, leaders become influential and gain a following because of their particular abilities to attract followers, rather than because of their position in a hierarchy (such as the Catholic Church). And so they sometimes use radical strategies to attract followers, particularly as is the case here, when they can easily use a scapegoat, raise the spectre of a threat from another religious group (Rohingya Muslims) and gain some followers (and sometimes material benefits). Unfortunately, there is often no established hierarchy to prevent such radical views from being espoused by some monks and then used to attract followers.

Is this an ethnic genocide or is it still too early to call it that?

It is clearly looking like ethnic cleansing. I think the goal is to try to force the remaining Rohingya across the border. The large-scale burning of villages and bombing campaign certainly suggest that this is the case but we’ll need to continue seeing reports from the ground to see the scale of what is happening.

Canada and the world should continue to condemn the situation, create pressure through the United Nations and continue to press the Myanmar government through diplomacy.  We do need to be careful about going down the route of sanctions, however, because the democratic government is fragile and a return to military rule would not help.

When you visited Myanmar in 2015 as part of a research expedition with U of T students, did you encounter Rohingya or people trying to remove them?

We did see Rohingya being sheltered in mosques in Yangon. While everyone simply said they were Muslims who were visiting, clearly they were Rohingya who had fled the conditions in Rakhine state and sought help in Yangon, even though it was illegal for them to be there or to provide them with shelter. The Muslim community was trying to keep as low a profile as possible. Since most of the violence occurred in Rakhine state, quite far from Yangon, I have not been able to travel there. There are restrictions on foreigners travelling to the area.