Beating the heat: U of T student’s cool idea to help workers in Qatar 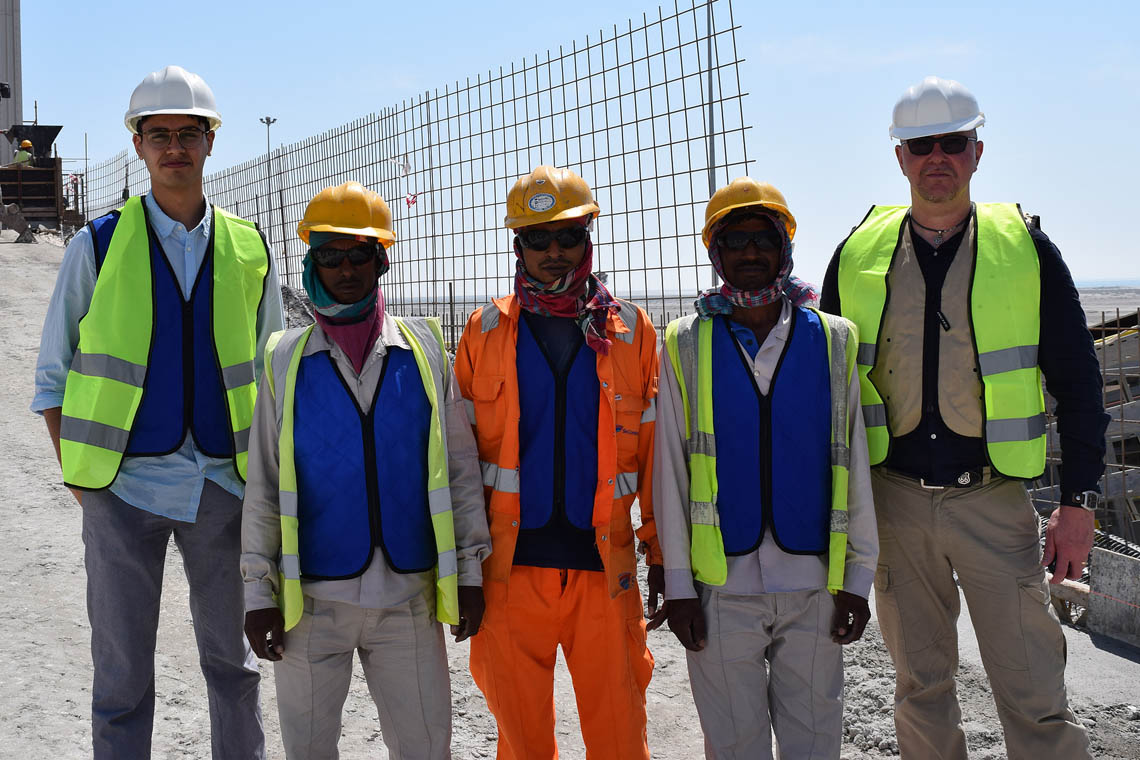 A great idea can strike at any time. For 19-year-old University of Toronto student Adam Sheikh, an ordinary evening watching the Discovery Channel led him to launch a program that could save hundreds of lives.

“I was watching Adam Savage film a video at Comic-Con where he put on this massive costume from the movie Alien,” says Sheikh, a second-year Peace, Justice and Conflict student. “When the actors in that movie wore the costumes, they were overheating. So Savage put on this weird-looking vest underneath his suit to keep his body cool. I started looking into this concept of cooling vests, and I figured if it’s working for actors in these massive costumes, maybe it could work elsewhere.”

Inspired to tackle a global problem by his professors in the Munk One first-year foundation program, Sheikh’s idea was to use cooling vests as a safety tool on construction sites in the Gulf region.

As the State of Qatar prepares to host the FIFA World Cup in 2022, there has been mounting concern over the treatment and safety of migrant workers hired to build stadiums and other infrastructure in time for the tournament. In a 2014 report on working conditions in Qatar, the International Trade Union Confederation (ITCU) estimated that 4,000 migrant workers could die before the World Cup begins. Performing heavy labour in sweltering temperatures, which can soar as high as 50° C in Qatar’s harsh summer heat, is one contributing factor to the projected deaths.

With cooling vests, Sheikh identified a critical way to intervene. He and a group of other students, some of them peers from the Munk School of Global Affairs, formed Aegis, a non-profit organization dedicated to providing cooling vests to migrant workers in the Gulf region. To pilot the project, Aegis partnered with cooling vest manufacturer Inuteq, and Six Construct, the Belgian-based construction company behind projects like the Emirates Towers and the Burj Khalifa. Armed with 100 cooling vests, Sheikh and his Aegis colleagues visited Qatar this summer to test the effectiveness of their proposed safety intervention on one of Six Construct’s construction sites.

“We were on the site every day – we would get there at five or six in the morning and test all day. We would measure the workers’ body temperature, heart rate, blood pressure and have the workers provide their personal reviews,” said Sheikh. “In a one-month period, the number of workers who had high blood pressure dropped by 50 per cent. And we were getting very strong reviews from the workers as well. By the end of our testing, the workers gave the vests an average rating of seven, with zero being ‘I felt no cooling’ and 10 being ‘I felt no heat at all’.”

Sheikh and his colleagues returned to Canada with the valuable feedback needed to refine the vest’s design. They worked with Inuteq to create a custom vest that met specific safety and cooling needs. Their vests now have high-visibility striping – an important safety feature – and the cooling material is now thicker than a standard vest, thereby extending the cooling time. Aegis is the sole distributor of these new and improved vests and is working with Six Construct with the aim to supply 10,000 vests to the company’s World Cup construction sites in Qatar.

In late October, Sheikh’s Aegis colleagues travelled to Vatican City to present their work at the Vatican Youth Symposium, a two-day assembly where young leaders from around the world share their solutions for achieving the UN’s Sustainable Development Goals. And the Aegis team is hard at work trying to supply cooling vests to more workers in need.

“We’re trying to extend our operations to the United Arab Emirates and eventually hope that we’ll be able to get the government to support and regulate the use of these vests,” says Sheikh. “And if that happens and we’re out of jobs? More power to that.”