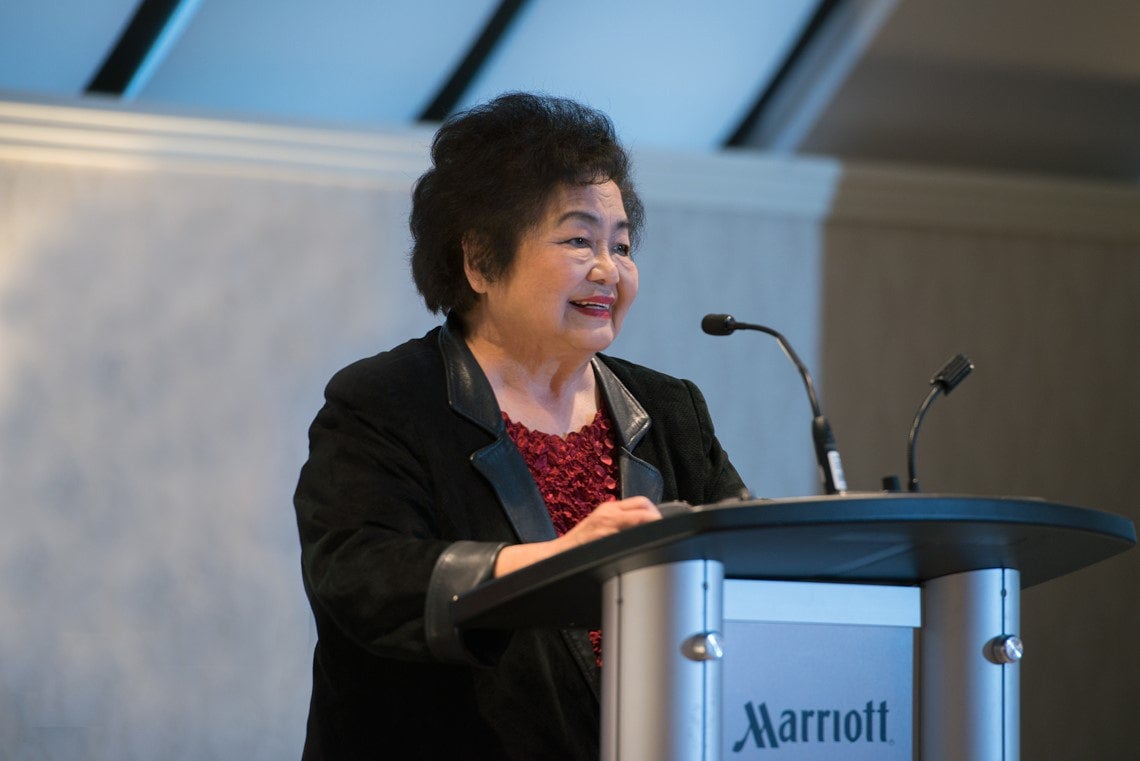 U of T alumna Setsuko Thurlow has been an anti-nuclear activist for decades, accepting the Nobel Peace Prize on behalf of the International Campaign to Abolish Nuclear Weapons (photo by Henry Feather)

Setsuko Thurlow was only 13 years old on the day the United States dropped an atomic bomb on Hiroshima.

She climbed out from under the rubble of a collapsed building where she had been pinned – only to find her beloved city on fire, family members and classmates burned beyond recognition, eviscerated in some cases, and classmates burned alive. Some family members seemed OK that day, only to find purple spots on their bodies days later and then dying shortly thereafter.

The U of T alumna, who was in Norway last year to accept the Nobel Peace Prize on behalf of the International Campaign to Abolish Nuclear Weapons (ICAN), spoke at a University of Toronto lecture on Thursday about her painful personal experiences from that fateful day and her work since then campaigning against nuclear weapons.

“By sharing my personal testimony, I have attempted to put a human face to the often abstract discussion of nuclear weapons with a hope that such an approach would help people to gain a deeper understanding, with empathy and sensitivity for the catastrophic human impact that nuclear weapons can inflict,” she told a crowded audience at the Marriott Bloor Yorkville Hotel.

The lecture, part of the Factor-Inwentash Faculty of Social Work’s Distinguished Speakers Series, was the first time Thurlow had recounted for a U of T audience her personal story of surviving the bombing of Hiroshima. Thurlow moved to Toronto in the 1950s after marrying a Canadian and obtained a master’s degree in social work from U of T, which she described as offering “invaluable training” for her future activism.

In her talk, the 86-year-old gave a detailed description of what that day in August 1945 was like for her. She was about 1.8 kilometres from ground zero that morning. As part of a student mobilization program, she and 29 of her classmates were working as decoding assistants. As she looked out the window, she saw a blinding, bluish-white flash. Then, the sensation of floating in the air. She thought she was dying, but rescuers found her in the rubble and helped her crawl out. She and two other students who survived then walked to the nearby hillside, part of what felt like a death march of survivors.

“Their hair stood straight up,” she recounted. “They were naked and tattered. Bleeding, burned, blackened and swollen. Parts of their bodies were missing, flesh and skin hanging from their wounds ... We students joined the ghostly procession, carefully stepping over the dead and dying. Deathly silence broken by the injured and their pleas for water. The foul stench of burned skin filled the air.”

She described that one of the images from that day that haunts her is that of her 4-year-old nephew “transformed into a charred, blackened and swollen chunk of flesh,” who kept begging in a faint voice for water. Her sister and the nephew had been walking on a bridge when the attack happened, and both died.

“This image of massive death and unspeakable suffering of humanity has been the driving force for me to continue my struggle for the total abolition of the ultimate evil of nuclear weapons,” Thurlow said.

“As I use a number of the dead, it pains me deeply, reducing the dead to numbers trivializes their precious lives and negates their human dignity. Each, each one had a name and was loved by someone,” she said, her voice cracking with emotion.

After decades of working to ban nuclear weapons and seeing little progress from nuclear weapon countries, Thurlow said things are now changing. A new generation of young activists have collaborated with ICAN, including two other U of T alumni – Ray Acheson and Allison Pytlak – and have put the spotlight on the humanitarian consequences of nuclear weapons, she said.

The Australia-based ICAN, which has branches around the world, played a key role in convincing the United Nations to adapt a landmark treaty outlawing nuclear weapons last July. The Treaty on the Prohibition of Nuclear Weapons is the first multilateral, legally binding instrument for nuclear disarmament to have been negotiated in 20 years, and it's because of ICAN's efforts that it received the Nobel Prize in December.

The new treaty was “a major step forward to the elimination of nuclear weapons,” Thurlow said. She criticized Prime Minister Justin Trudeau for not supporting the UN treaty to ban nuclear weapons, urging members of the audience to pressure the government to change its stand.

“I am delighted a new time has come that a humanitarian focus has become so important,” she said. “I have never felt as hopeful as I do now to see the countless younger activists, so bright, energetic, creative and political savvy, joining ICAN and committing to banning the bomb. After seven decades of hard, persistent work, we have made it to this point. For the first time, nuclear weapons have been specifically condemned and declared illegal.”