Academic-industry partnership aims to lower the cost of cultivated meat 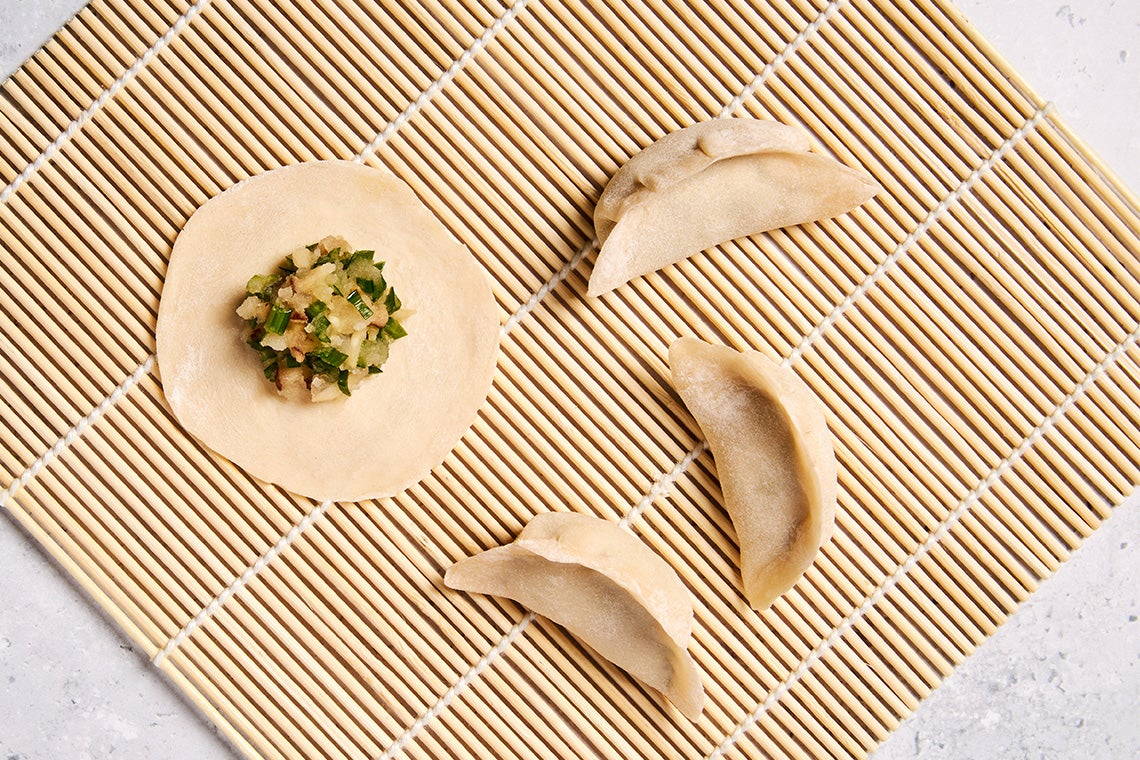 U of T researcher Michael Garton is working with Myo Palate to reduce the cost of producing meat without raising animals – such as this dumpling made with cultivated pork and store-bought vegetables (photo: Joanna Wojewoda/Myo Palate)

When the University of Toronto’s Michael Garton got a call from Myo Palate – a company that is producing meat without raising whole animals – he knew it was the opportunity he’d been waiting for.

“My research has always been focused on health care and medical applications,” says Garton, an assistant professor in the Institute of Biomedical Engineering in the Faculty of Applied Science & Engineering.

“But environmental issues are something I really care about – something we all care about. Given the impact that agriculture has on the environment, I knew this would be a great way to make a difference.”

Myo Palate is looking tap the synthetic biology expertise of Garton and his team in an effort to reduce the cost of growing muscle cells. The collaboration is funded by a grant provided jointly by Genome Ontario and the Canadian Food Innovation Network.

”This is an exciting opportunity to collaborate with Dr. Garton and utilize cutting-edge synthetic biology techniques to reduce the cost of growing muscle cells,” says Frank Yu, co-founder of Myo Palate.

“While our initial products will not contain genetic modifications, we think that this will be a game changer for the future.”

Garton’s current medical research involves designing customized stem cells, derived from a patient’s own tissues, that could be used to treat certain diseases or conditions.

“For example, one challenge we are interested in is neurological diseases such as multiple sclerosis or ALS, which are caused or amplified by chronic inflammation of nerve tissue,” says Garton.

“We can take stem cells from a patient and program them to specifically detect chronic inflammation and to release anti-inflammatory molecules in response. We could then re-implant those cells back into the body.”

Because the anti-inflammatory molecules are released only where and when they are needed, this approach – known as ex vivo gene therapy – could reduce the side effects associated with treatment via traditional drugs.

Using this knowledge to create cultivated meat – that is, animal cells grown outside a living animal – may not seem like an intuitive leap to make, but Garton says that there are plenty of parallels.

“In our work, we face the challenge of getting our stem cells to grow and differentiate into the types of tissues we want to make,” he says.

“Producers of cultivated meat will be doing much of the same thing. And because their cells will be consumed as food, rather than implanted into a patient, there are fewer obstacles in the overall process, which in a way makes it slightly easier.”

But the challenges of creating cultivated meat go well beyond whether or not it is technically possible – economics are also critically important. Cultivated meat is not yet cost-competitive with raising whole animals, which is one of the major factors limiting its widespread adoption.

“Unless we can get the cost down, it’s just not going to fly,” says Garton. “What we’re hoping is that our expertise in synthetic biology can reduce or even remove the need for some of the more costly inputs.”

One example is growth factors, which are specialized biochemicals that signal what kind of environment a given cell is growing in. Their presence or absence determines what type of tissue a stem cell will grow into: for example, skin, nerves or muscle.

In the case of cultivated meat, the goal is typically to produce myocytes, or large muscle cells. While growth factors that result in this type of tissue can be readily purchased, their relatively high cost is a major hurdle to producing cultivated meat at a competitive price.

Garton and his team hope that their research can result in stem cells that require lower amounts of these growth factors, or even none at all.

“We’re testing lots of different ways of approaching this challenge, and we’re also automating the process so we can do it in a high-throughput way,” says Garton.

“We’re developing machine learning methods that can sort through the data to find out what’s working and what’s not, and what will most likely be successful in the next iteration.”

Garton says he is excited about the opportunity to make an impact in a fast-growing field.

“It’s going to be a very long time before we have a stem cell that automatically grows into a real muscle in the lab with minimal inputs,” he says.“But in terms of putting the foundational pieces and core building blocks in place to achieve that, I think we’re going to be able to deliver some real insights relatively quickly.”