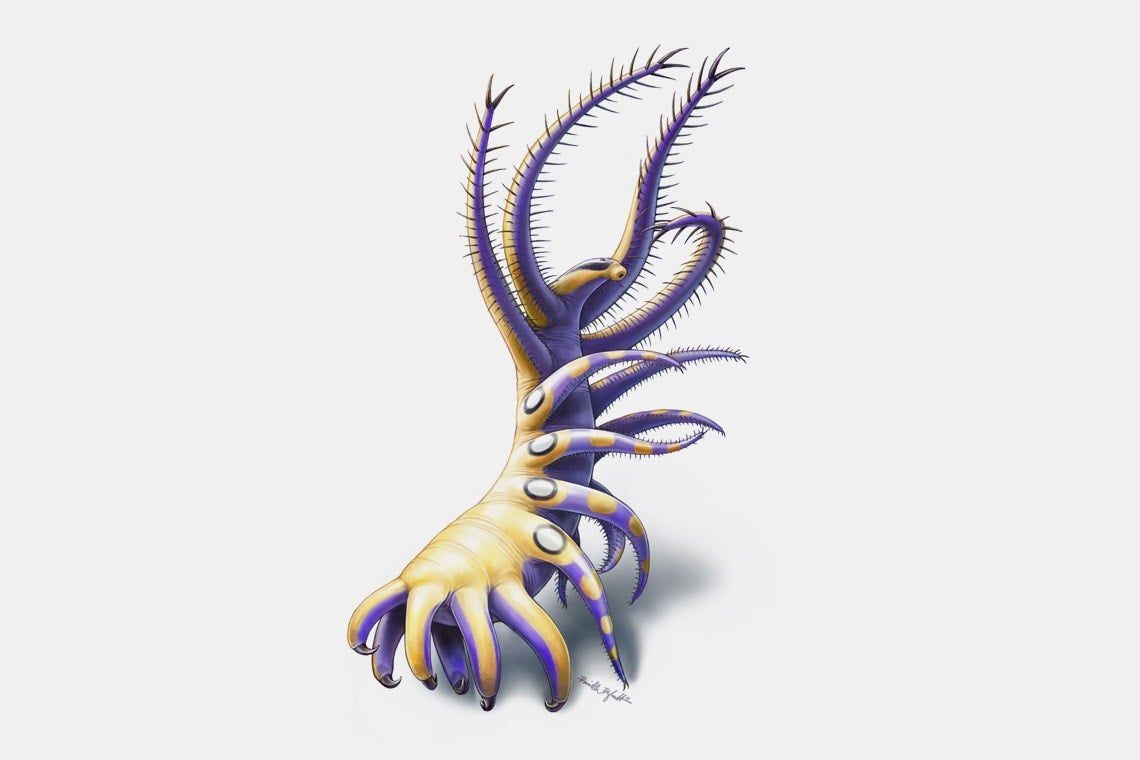 A new species of lobopodian – a worm-like animal that could stand nearly upright – from the Cambrian period (541 to 485 million years ago), has been detailed for the first time from fossils found in the Burgess Shale in the Canadian Rocky Mountains.

Details of the new species, called Ovatiovermis cribratus, have been published in the open access journal BMC Evolutionary Biology.

The new species is only the third lobopodian that has been formally described from the Burgess Shale. It is one of the rarest species found there, and now it's in the collections of the Royal Ontario Museum in Toronto.

Jean-Bernard Caron, an associate professor at U of T and senior curator of invertebrate paleontology at the Royal Ontario Museum (ROM) is the lead author of the study.

“Although Ovatiovermis is no longer than my thumb with all limbs stretched out and is only known from two specimens, this new species provides fantastic new insights into the ecology and relationship of lobopodians, a group of mainly Cambrian marine invertebrates which are key to our understanding of modern tardigrades, onychophorans and the largest group of animals on Earth – the arthropods,” said Caron, a researcher in the departments of ecology and evolutionary biology and earth sciences at U of T's Faculty of Arts & Science.

Caron and Cédric Aria, a PhD candidate in U of T's department of ecology and evolutionary biology, believe that strong recurved claws on the back limbs may have allowed Ovatiovermis and other related species to anchor themselves on hard surfaces and stand more or less upright. Two long pairs of flexible and spinulose (hairy or spiky) limbs at the front of the body would then have been used to filter or collect food from water and bring it closer to the animals’ toothed, eversible mouth.

“The various adaptations of this new animal to anchored particle feeding are reflected in its name,” said Aria, a co-author of the study. “The species, cribratus, is the Latin for “to sieve,” whereas the genus name, Ovatiovermis, refers to that posture it must have ordinarily taken along the bottom of the sea: a worm-like creature that stood in perpetual ovation.” 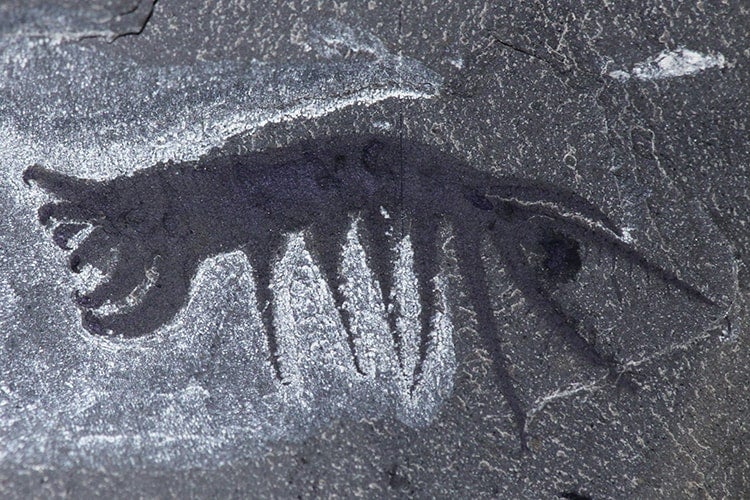 This specimen, the holotype for “Ovatiovermis cribratus,” was collected in 1994 by the Royal Ontario Museum at the Walcott quarry, located in Yoho National Park, British Columbia (photo by Jean-Bernard Caron ©Royal Ontario Museum)

Even though lobopodians have long been known and studied, and occupy an intriguing position in the tree of life of invertebrate animals, their ecology had remained poorly understood. The authors of the study also think that their findings provide new views on the evolution of lobopodians and their relatives.

“Lobopodians have mostly been seen so far as an eclectic group,” Aria said. “We think that suspension feeding was common among them and turned out to be important in the initial ‘burst’ of that colossal group that gave rise to water bears, velvet worms and arthropods. Interestingly, today, skeleton shrimps (Caprellidae), which are arthropods and thus much more complex living relatives of the lobopodians, have adopted a very similar lifestyle, and you can see them waving in the drifting water possibly much like Ovatiovermis used to.”

“These results contribute to cumulative evidence that suspension feeding was already a widespread mode of life during the Cambrian period,” Caron said. “Its emergence has been important for the elaboration of modern marine ecosystems and must have played a role in the rapid diversification of the first animals.” 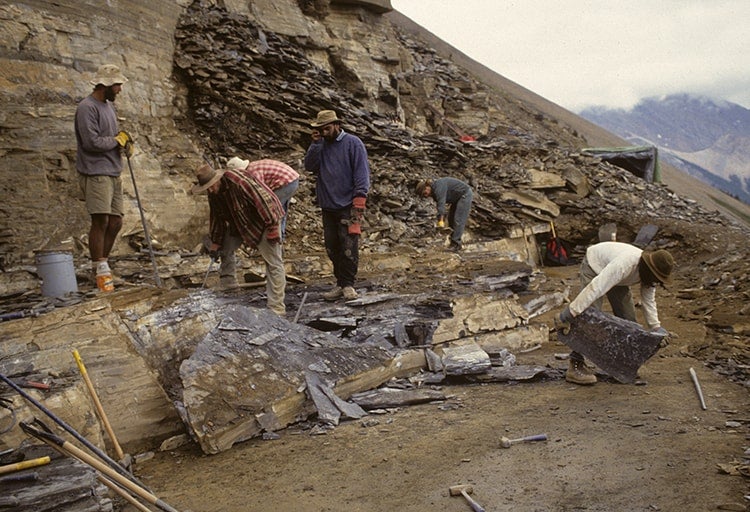 The researchers were surprised however to find that unlike many other lobopodians, O. cribratus, did not have any hard structures to protect its body.

“Contrary to its relatives, this species does not have any spines or plates on its body for protection,” Caron said. “Its ‘naked’ state begs the question of how it was able to guard against predators.”

The absence of ornament in the new species demonstrates that organisms that lived in the Cambrian period did not exclusively develop hard defensive structures to protect themselves.

The researchers speculate that O. cribratus may have lived in sponge colonies to avoid predators, or that by analogy with modern animals it used camouflage or was toxic or distasteful to predators. However, this is a question that is difficult to solve with fossils, and it may remain forever one of Ovatiovermis’ secrets.

The Burgess Shale, located in Yoho and Kootenay National Parks, is part of the Canadian Rocky Mountain Parks World Heritage Site. The holotype specimen was discovered by the Royal Ontario Museum in the Walcott Quarry, the original Burgess Shale site, in Yoho National Park. It remained the only known specimen of this new species for nearly two decades until a park visitor serendipitously discovered a second specimen while on a recent Parks Canada sponsored guided hike to the Walcott Quarry.

Parks Canada protects the Burgess Shale, and supports peer-reviewed scientific research that continues to enhance our understanding of these rich palaeontological deposits. This new discovery adds another element to the story of early animal evolution that Parks Canada guides share enthusiastically with hundreds of park visitors every year. 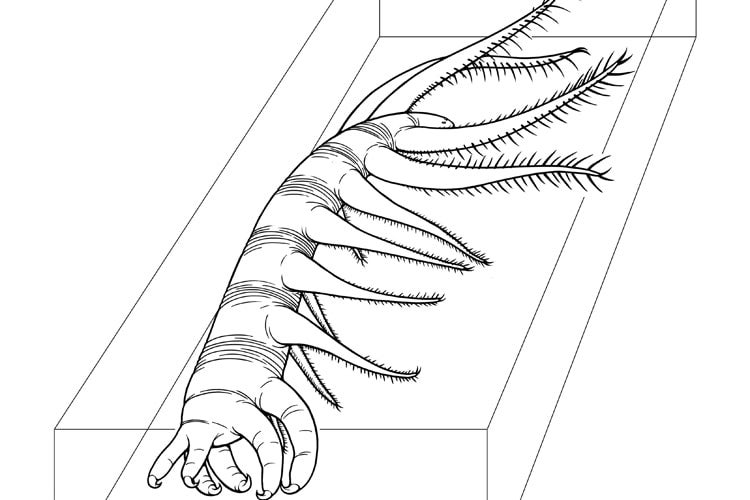