5 U of T undergrads recognized at global summit in Ireland 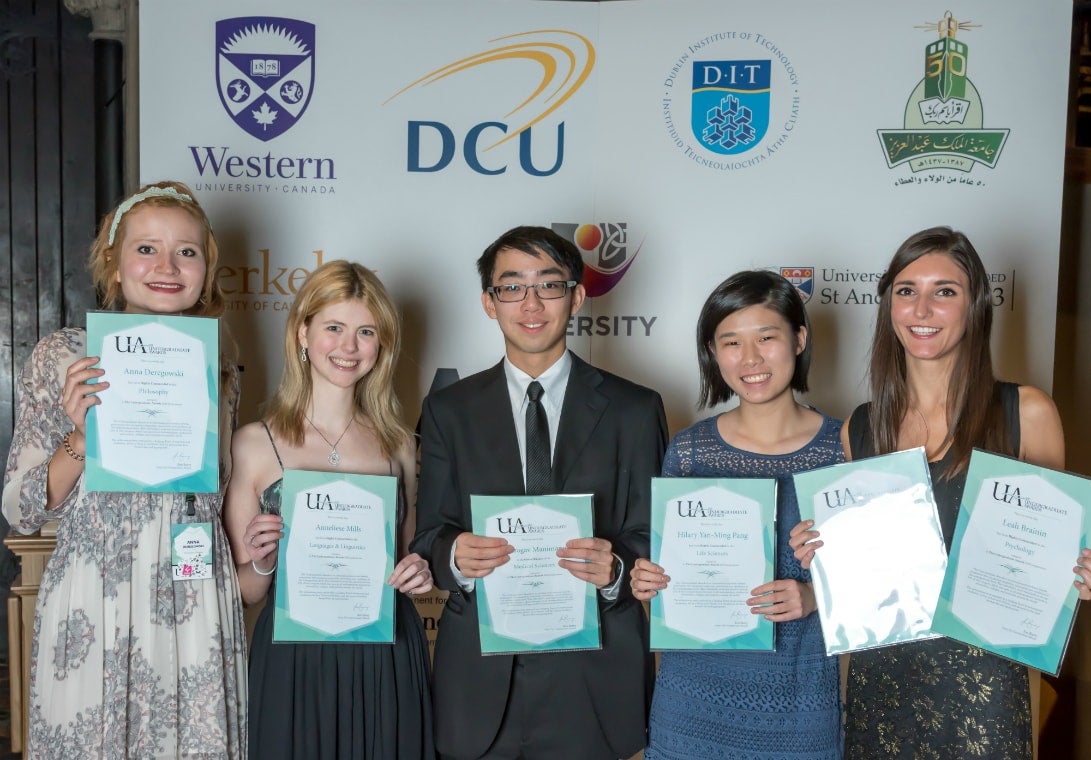 Honoured for writing insightful essays of a few thousand words, five University of Toronto undergrads were flown thousands of kilometres to Dublin and back.

Leah Brainin, Benson Cheung, Anna Deregowski, Anneliese Mills and Hilary Pang were invited to the Undergraduate Awards summit in Ireland after their essays made the Highly Commended list, meaning their papers ranked among the top 10 per cent of submissions in their category.

The awards recognize creative and outstanding undergraduate coursework. The students researched a variety of subjects. One was a study of the American political climate after 9/11 through the lens of monster blockbusters. Another student reviewed an influential 19th century linguistics book using modern data analysis.

The students spoke to U of T News about their essays and their trip to Dublin. 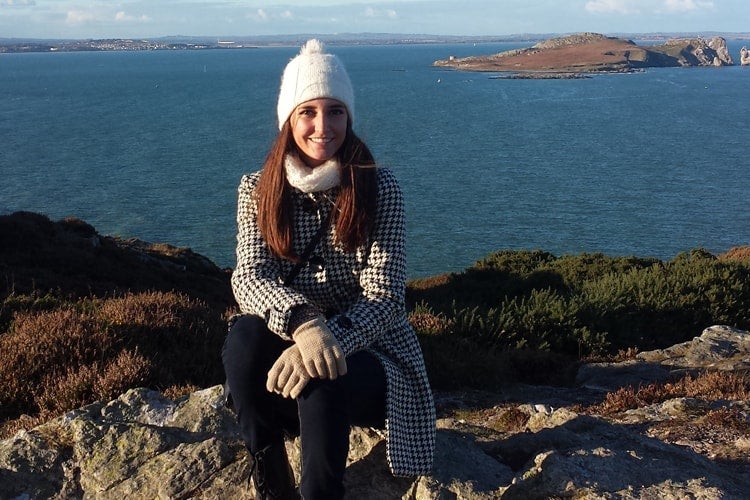 Major in cognitive science, minor in linguistics and sociology

Essay topic in a nutshell: “Two of my papers were highly commended. One was in the psychology category and it was a neuroscience paper looking at the different brain pathways we use when we read. I proposed that there are two distinct pathways we use, and that some people with brain damage can only use one. The other was a linguistics paper. It was looking at how language production and comprehension are intertwined.”

Highlight of the summit: “I think it was meeting people from all over the world and studying different things and being able to relate to them.”

Impression of Dublin: “It was beautiful. I felt at home. It had a big city vibe but in a small town… There was also a place we went to outside of Dublin, Howth, a tiny fishing town with cliffs. We climbed to the very top of the cliffs. That was my favourite, for sure.”

What’s next: “I’m in fourth year, so I’m applying to psychology programs in Ontario. I’m specifically interested in studying language within psychology. I think it’s what I best understand and it’s something we take for granted because language is so much more complex than we think, and yet we use it everyday.” 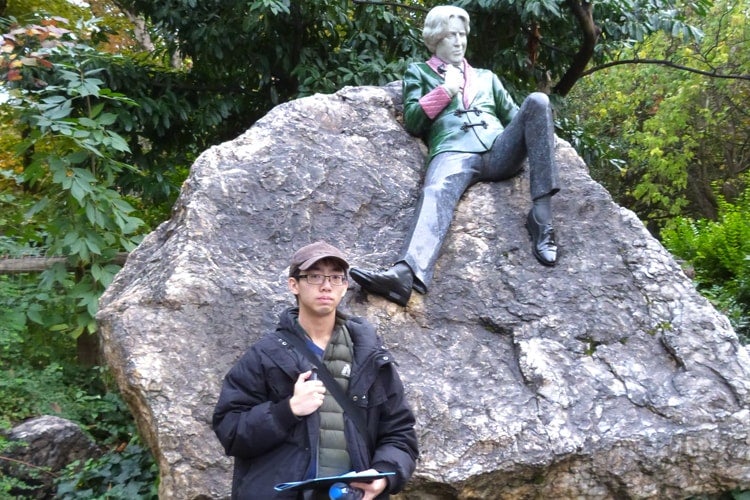 Major in history and political science

Essay topic in a nutshell: “The first essay is on American media before and during the invasion of Iraq. I was analyzing the theories about why they failed to be critical of the war. In the other one, I’m using monster movies to see how the American political climate shifted from this end-of-history attitude (articulated by political scientist Francis Fukuyama) to one of apocalyptic terror.”

Impression of Dublin: “I thought the people were really friendly. At times, it felt like Canada but with an accent.”

What’s next: “I’m applying for grad school in poli sci, but right now I’m in a bit of a quandary because the stuff I want to study is interdisciplinary.” 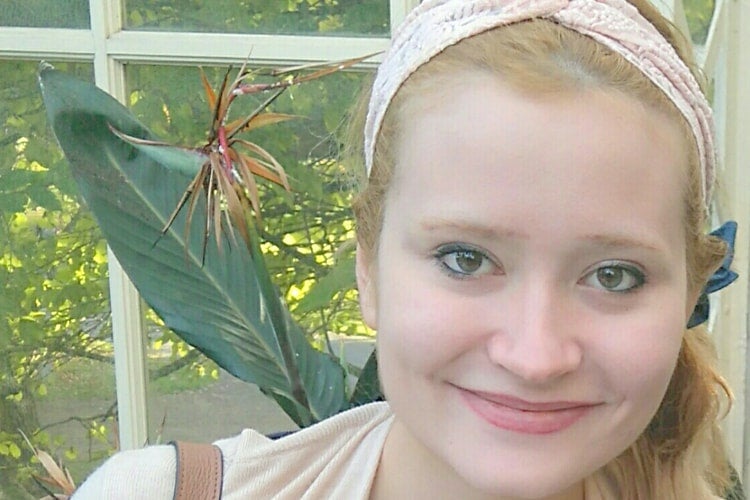 Anna Deregowski, who studied English, history and linguistics, says she fell in love with Dublin when she attended the Undergraduate Awards Global Summit 2016 (photo courtesy of Anna Deregowski)

Major in English, minor in history and linguistics

Essay topic in a nutshell: “I wanted to write a paper and create a work of art at the same time. I had a great professor who let us go our own way, which to me made all the difference. I was influenced by this writer, Timothy Morton, and wanted to create a really big, almost profound entanglement between the reader and the paper.”

Highlight of the summit: “Definitely all the diverse people I got to encounter in Ireland. Seeing everyone’s ideas was such a highlight. Not just hearing their ideas but getting to know the people. It almost felt like something magical because we were far away in Dublin and we all came together.”

Impression of Dublin: “I loved the cobblestones. The people were very friendly. I don’t get to go away much, so going to Dublin felt like a dream. I kept thinking I’d wake up, and none of it would be real.”

What’s next: “I actually don’t really know, but I’d like to continue my studies eventually… I really love research so I’d love to explore different fields.” 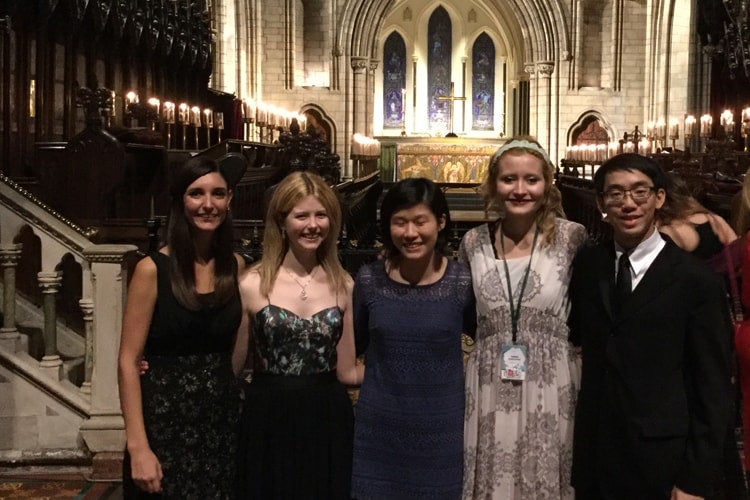 Anneliese Mills, a history and anthropology student (second from left), says her favourite part of the trip to Dublin was the black tie gala dinner at St. Patrick's Cathedral (photo courtesy of Anneliese Mills)

Major in history and anthropology

Essay topic in a nutshell: “It was on gendered language, specifically. It looked at one particular work published in 1975 and I looked at it in 2015 to see if 40 years later, it was still relevant for linguistics.”

Highlight of the summit: “For me personally, it was probably presenting. It felt amazing to be presenting at an international conference. That aside, one of the best events was going to the gala dinner in St. Patrick’s Cathedral.”

Impression of Dublin: “It was a beautiful city the weather was surprisingly nice. There was a lot of interesting historical architecture.”

What’s next: “I’ve applied to med school, and I’m also looking at doing grad school in history or anthropology.” 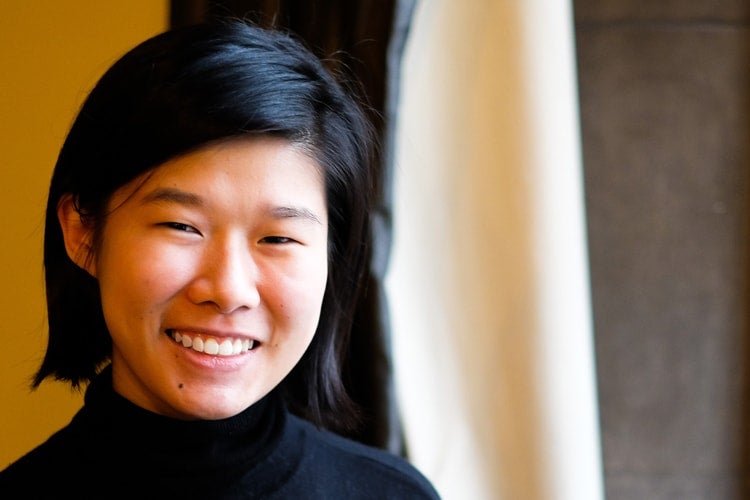 Hilary Pang, a pathobiology student seen here at Hart House, says she enjoyed collaborating with undergrads from around the world at the summit in Dublin (photo by Geoffrey Vendeville)

Essay topic in a nutshell: “Fat-derived stem cells reverse fibrosis, one of the major causes of organ dysfunction, through the secretion of extracellular vesicles (potent vehicles of cell-to-cell communication).”

Highlight of the summit: “The whole conference was a highlight. I think it might be the interdisciplinary collaboration. I got to talk to people from so many backgrounds, cultures, disciplines that it was really eye-opening and gave me a lot of ideas.”

Impression of Dublin: “It’s a great city. I liked the history and how welcoming it felt. There was a very inclusionary feeling that is pretty rare in a city that large.”

What’s next: “I’m applying to med school and grad school. I’d like to do an MD/PhD.”