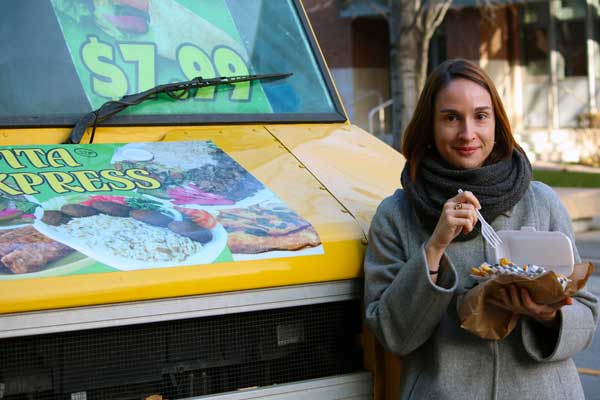 Over the last three years, Irina D. Mihalache read over two hundred historic recipes from the 1900s to the 1960s at the Thomas Fisher Rare Book Library. The recipes, together with stories of women's agency in the culinary field, will make up an exhibition at the Fisher Library in May 2018 that sheds light on Canadian cooking culture throughout the years.

Mihalache, an expert on the intersection of museum, food and communication studies, will take us through the cooking rituals of the past with scrumptious vintage recipes: pieces of history that you can recreate in your kitchen today.

“Contact with these recipes made me aware of Canadian women’s role in crafting culinary culture, defining nutrition standards, and producing expert food knowledge,” says Mihalache. “To appreciate the biography of a recipe, we need to observe it in its proper historical, cultural and social context.” Recipes for the historic dishes that Mihalache studied circulated in Chatelaine, MacLean’s, Toronto Star and The Globe and Mail.

“Perfection salad (gelatin rings full of suspended veggies), tuna noodle casserole, salmon mousse or ambrosia: at one point in time, these recipes were exciting, modern and desirable,” she says. “They were cooked by many women (and a few men) in Canada, with  new ingredients such as flavored gelatin, baking powder and shortening, that presented welcomed  shortcuts, despite the fact that such shortcuts ‘threatened”’ the traditional ways of cooking from scratch.”

We start with the vintage recipe of Stuffed Maple Leaf Weiners – a popular dish found in a 1947 cookbook.

“If you have not yet stuffed a Maple Leaf wiener with cheese and wrapped bacon around it, you are truly missing out!" says Mihalache. “Here’s your chance to indulge in a favorite of the 1940s, with a Canadian twist.”

The recipe was sent to the ‘Good-Things-To-Eat reporter’ for Canada Packers – a fictional character named Brenda York, who was played by Kathleen Kay Hodgins (a U of T alumna), Mihalache says. Canada Packers was integrated into Maple Leafs Food in the early 1990s.

“Canada Packers, like many other food companies at the time, used fictional female characters, portrayed by skilled home economists like Hodgins, to raise brand awareness and appeal to the Canadian ‘housewife’. Brenda York promoted Maple Leaf products, gave cooking classes, and wrote columns for many popular Canadian magazines. She also invited housewives to send her recipes featuring Canada Packers products, such as Maple Leaf Wieners, which could win up to $100. And this is how this appetizer gained its fifteen minutes of fame!”

INGREDIENTS AND INSTRUCTIONS:
Slit ‘Maple Leaf’ Banded Wieners lengthwise with a small paring knife.
Cut ‘Maple Leaf’ Canadian Cheese in ¼ inch slices and then in strips.
Place a strip of Cheese in each pocket and wind a slice of ‘Maple Leaf’ Breakfast Bacon around the Wiener and Cheese.
Fasten the Bacon with toothpicks.
Place in over 350-375 for about 15 minutes. Serve immediately
(Source: Recipes from Canada Packers Cooking School at the C.N.E. by Brenda York; Mary Williamson Culinary Ephemera, Thomas Fisher Rare Book Library)

Note: these recipes are presented in their original format, which differs from contemporary recipe structure. For the best experience of the dish, read the recipe and take note of differences between historic and modern recipes, specifically in ingredients that might not be popular today.

Food Journal is a limited series exploring our stories and histories around food. You can read the series in The Bulletin Brief: a news digest about the University of Toronto. Subscribe to the brief here.