Is the world really falling apart? Experts from U of T's Munk School weigh in for CBC's Ideas 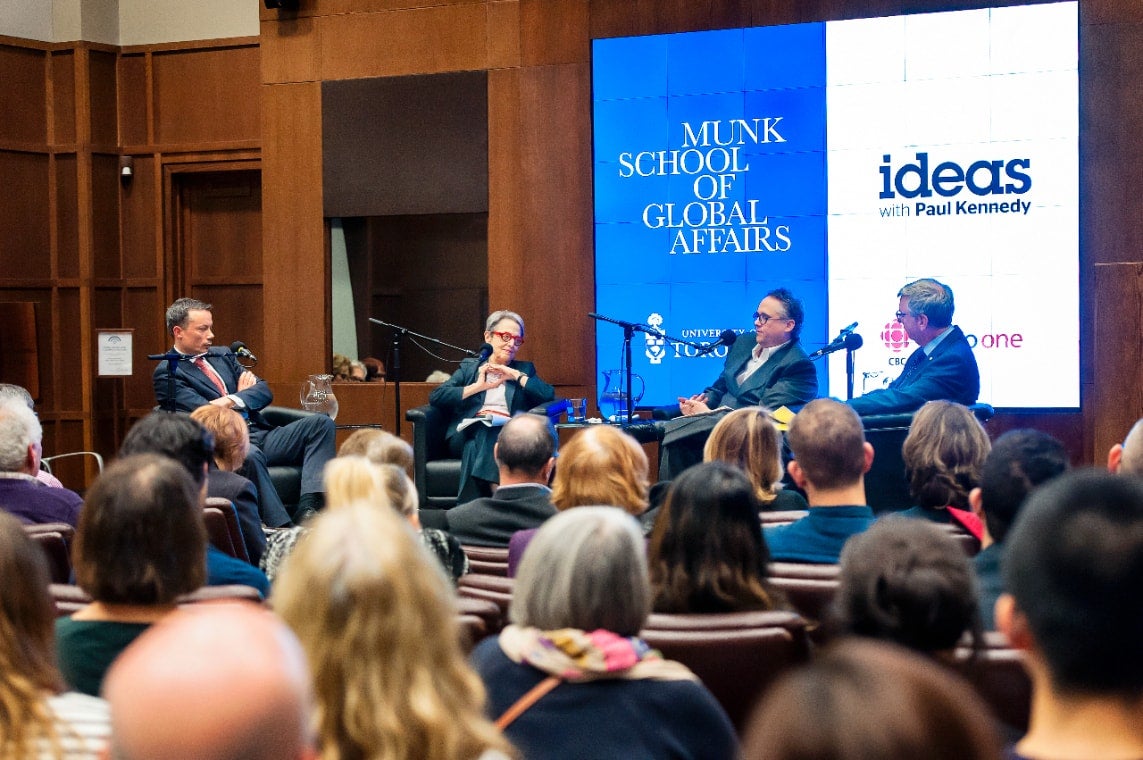 Scholars from the Munk Centre debated the fate of the world for a CBC Ideas episode that will be broadcast on Dec. 19. From left to right: Randall Hansen, Janice Stein, Michael Blake, Stephen Toope (photo by Lisa Sakulensky)

From the murder of activists in Turkey, India and Russia to the racism amplified by Brexit in the UK to the extremism of Trump in the U.S., the world seems to be in deep trouble. The sudden, sharp turn to the far right (or to the “alt right,” as it’s now called) has shaken people in the West to their cores.

How can we understand these global changes? What are the solutions, if any? These were some of the questions that experts tackled at the Munk School of Global Affairs during recent a live taping of a panel discussion for CBC Radio One's Ideas.

On December 19, Ideas will broadcast the episode, called “Reflections on Global Affairs: Is the world really falling apart?” This is the fifth event organized by the Munk School and Ideas, a partnership that began in 2015. Past episodes, broadcast twice a semester, included “Big Data,” “Global Justice,” and “Much Ado about Magna Carta.”

More than a million listeners in Canada and the U.S. tune in to Ideas each week.

The upcoming discussion focuses on the idea of the “centre,” or “liberal democracy,” falling apart. It also presents the idea of “progress” as a possible hope or solution.

“Things are a mess,” began moderator Stephen Toope, director of the Munk School and an expert on human rights, international dispute resolution and legal theory, during the taping of the event. “Things do seem to be falling apart.” It’s as if anarchy were loosed on the world, he told the live audience of 130 people.

Panellist Janice Gross Stein, founding director of the Munk School and political science professor, disagreed, stating that liberal democracies aren’t falling apart. She argued that swaths of people in Western countries work at precarious jobs, live with “economic anxiety,” and blame globalization and immigration for their economic woes. She explained that elites are benefitting from globalization and other processes while non-elites aren’t. “It’s possible the U.S. election is a correction – a turn to a segment of the population that feels deeply unheard,” she said, citing one example.

“They might feel unheard, but the idea that for the last eight years, nothing was done for them is ridiculous,” countered panellist Randall Hansen, director of the Centre of European, Russian, and Eurasian Studies at the Munk School and political science professor. He referred to the multi-billion-dollar bailout of the auto sector, provision of health care for those who had none and to other U.S. policies for those who feel unheard. He argued that never has the straight, white male been more powerful, yet the racists among them have been told that they’re patriotic. “Their anger is absurd,” he said.

Panellist Michael Blake, professor of philosophy, public policy, and governance at the University of Washington, pointed to deeper issues, such as hatred and rage, that go beyond economic and policy debates. “Progress mixes with horrors,” he said during the second half of the discussion, which was about technological and human progress. He added that every great invention, such as the Internet, contains the best and worst of our species.

“We can’t innovate away human weaknesses,” he explained. In the U.S., more people die from toddlers with guns than from terrorists, yet the demonization of Muslims continues, he said.

“People are unashamed of hatred,” he said. We need to examine that, and we need look at words like “fairness” and the rise of racism and the far right. We need to “understand the emotions and attitudes that have given rise to these phenomena in the first place,” he said.

“Reflections on Global Affairs: Is the world really falling apart?” will be broadcast across Canada on Ideas, CBC Radio One on December 19 at 9:05 p.m. (in each time zone), and 9:35 p.m. in Newfoundland. Use the hashtag #MunkIDEAS on Twitter to share your thoughts on the discussion.