'The world definitely needs to be changed': Human rights advocate Matida Daffeh on her journey to convocation 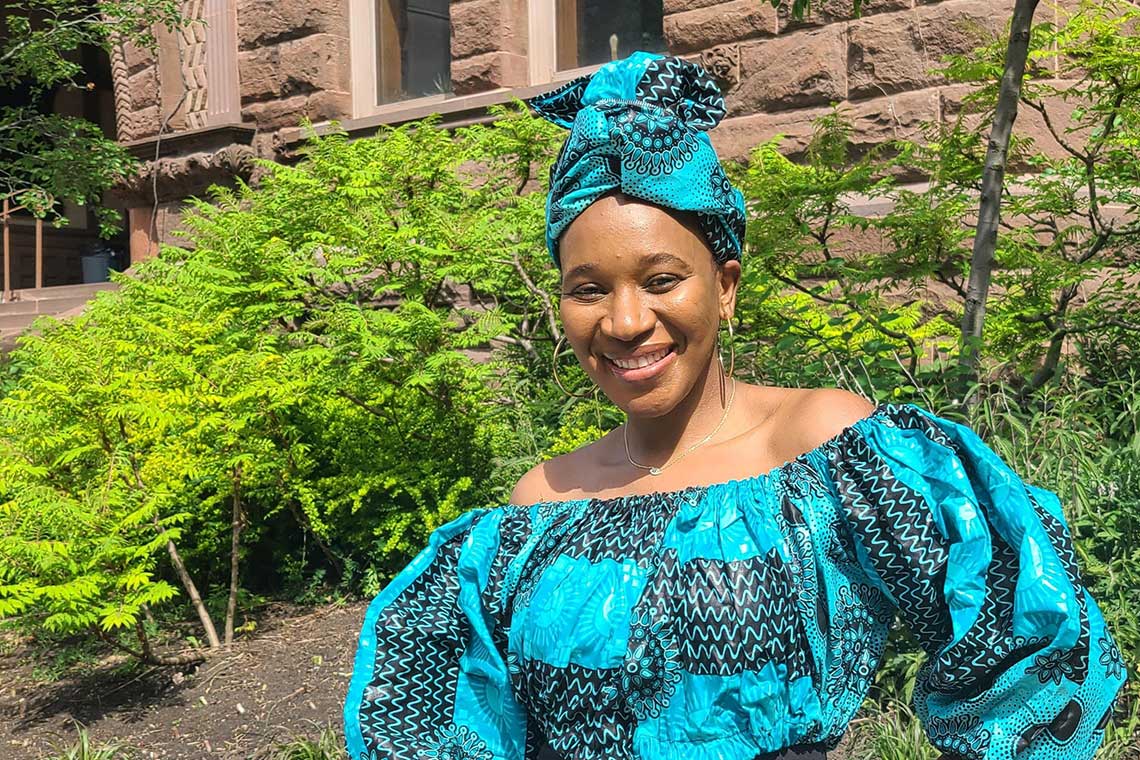 Matida Daffeh, who graduated from U of T this spring, is a well-known campaigner for the rights of women and girls in the West African country of The Gambia (photo courtesy of Matida Daffeh)

When Matida Daffeh received her honours bachelor of arts degree from the University of Toronto, it was the culmination of an extraordinary journey that was difficult, dangerous and ultimately triumphant.

When she first arrived in Toronto in 2016, Daffeh was already a well-known campaigner for the rights of women and girls in her West African home country of The Gambia – work that frequently put her in great danger.

Under the rule of now-exiled dictator Yahya Jammeh, human rights defenders were routinely subject to arrest and torture. So, when a local newspaper falsely reported that Daffeh was considering challenging him for the presidency, she immediately felt the uneasy glare of being put under a spotlight.

“I knew my life was in danger,” she says, recalling the day she was called in for questioning by the country’s National Intelligence Agency. “It was a very risky time for me.”

Soon after, however, she received an opportunity to attend a leadership program in Toronto led by the Women’s Human Rights Institute, which was then housed at the Ontario Institute for Studies in Education (OISE). She left The Gambia and eventually sought asylum in Canada.

Within a year, Daffeh enrolled in U of T’s Transitional Year Program and took her first step toward earning a university degree. A village child in a polygamous family of 20 siblings, Daffeh says the goal had previously seemed unattainable – particularly after the death of her father, the family’s main breadwinner.

And yet, separated from her four-year-old son back home, Daffeh also experienced some of the lowest moments of her life.

“Three months prior to coming to U of T, I lost my mother as well,” she recalls. “So here I was grieving, all alone in this very wide place.”

Having spent so long campaigning for the rights of others, Daffeh suddenly realized she had to start advocating for herself.

“It took some time; I didn’t know if I could trust people to talk to them about my reality,” she says. “But there is so much support at U of T, if you know how to navigate – whether through the registrar’s office, or the Family Care Office, or the student community.”

Daffeh was reunited with her son in 2018 and eventually became a mentor at the Family Care Office. There, she helped others integrate studies with family life. “This was one of the most rewarding things,” she says. “It’s what I love to do – not telling people what they should do but sharing advice about what has worked for me.”

With a double major in women and gender studies and equity studies, and a minor in African studies, Daffeh was able explore the theoretical side of the extraordinary work she had been doing in both The Gambia and neighbouring Senegal.

Before coming to Canada, Daffeh worked with a sustainable development organization in Africa called United Purpose. She was also the co-founder of a grassroots feminist movement known as The Girls’ Agenda, aimed at aim ending female genital mutilation (FGM) and other practices that that negatively impact women and girls.

“I was exposed myself to FGM when I was four or five years old,” she says, “and my personal experience has shaped much of the activity and the social justice work that I do. In my work, I lived with people in some of the smallest and most remote communities, seeing women and girls experience issues with inequality – whether that was FGM, domestic violence, teen pregnancies or lack of decision-making power.”

Today, Daffeh is optimistic that the situation is getting better for women in her country. A 2013 study established that 76.3 per cent of females in The Gambia were subject to FGM, but it has been banned there since 2015 and there is reason to believe it could be eliminated within a generation. Nevertheless, Daffeh is ever on her guard since she knows the women’s issues that she is fighting for aren’t always taken seriously by political leaders.

In Canada, she intends to continue her human rights work. A top student, she received many awards and scholarships while a member of Woodsworth College. They included the Brookfield Peter F. Bronfman Leadership scholarship, the Dr. Joyce Connolly Award, the June Straker Award and the Phyllis Velona Walker scholarship. “There is no way to express how much these people have helped me,” she says. “I can’t thank them enough.”

This fall, she will begin working toward her master’s degree in social justice education at OISE. After that, she is considering a law degree “to contribute to systemic change.”

Daffeh had to overcome towering obstacles on her journey to graduation, but she encourages others not to avoid committing to a purposeful life that involves big risks.

“Society is structured in a way that we are expected to accept the status quo. If you dare to question it, you are labelled,” she says. “But I would say that if you are interested in work in social justice, or in feminist or racial issues, go for it. When I started, it just began as conversations with my friends. Eventually, I got involved at the community level.

“I know it can be very scary, but the world definitely needs to be changed. And if you are labelled as an angry person? Well, that is OK.”