Working together to fight anti-Black racism: U of T’s Anti-Racism and Cultural Diversity Office 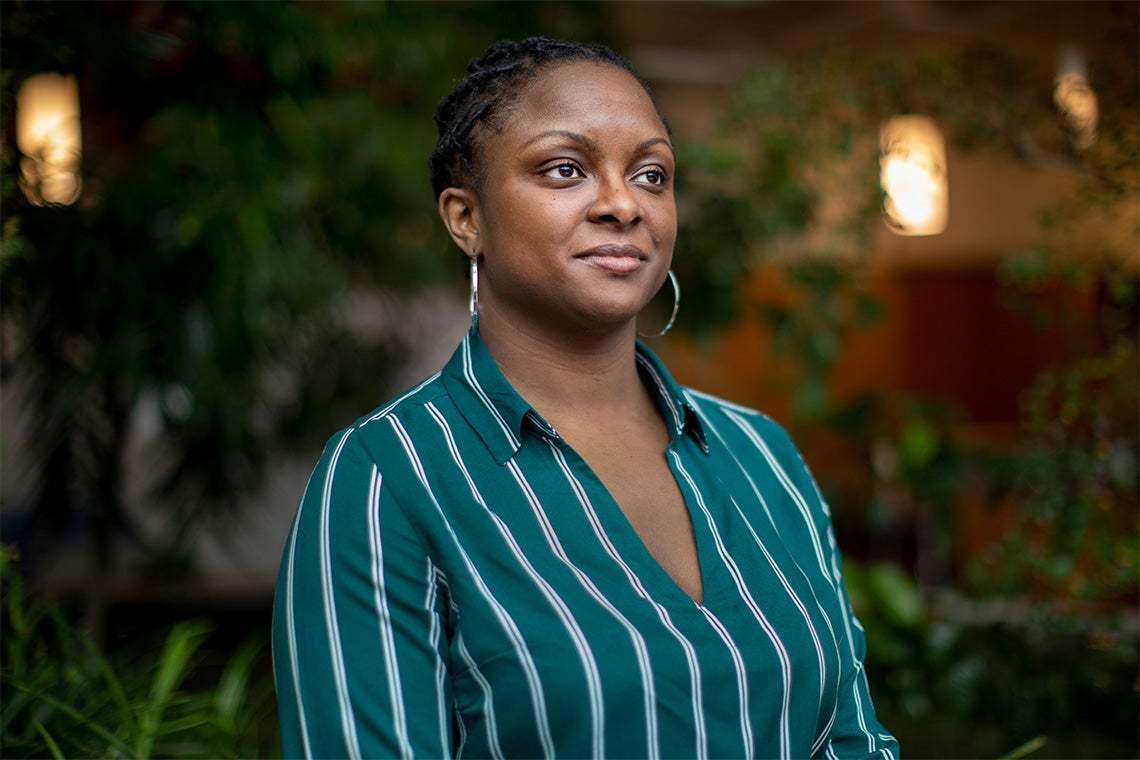 Jodie Glean, director of U of T’s Anti-Racism and Cultural Diversity Office, has been providing training and raising awareness around anti-Black racism across the university’s three campuses (photo by Lisa Lightbourn)

For Jodie Glean, as well as many others at the University of Toronto, the killing of George Floyd in May by a Minneapolis police officer hit close to home.

“Like many people, I’m surrounded by Black men in my life: my spouse, my brothers, my father,” says Glean, the director of the University of Toronto’s Anti-Racism and Cultural Diversity Office (ARCDO).

“And though racism has always been a lived reality for our community, we needed to gather to talk about this most recent act of racial violence.”

In response, Glean and her team helped organize four online venues for members of the U of T community to discuss anti-Black racism in June – just as millions took to the streets across North America and around the world to protest police brutality and anti-Black racial violence.

More than 2,000 people participated in the U of T-hosted discussions, which included two 90-minute sessions that promoted healing and restoration specifically for members of the university community who identify as Black.

“We know that anti-Black racism has a significant impact on mental health,” says Glean. “We wanted to activate spaces that would allow folks to gather, connect and heal – and to allow for expressions of anger and pain.”

The other two events were open to the entire U of T community and focused on conversations around allyship and solidarity – and understanding what it means to operate within a culture of whiteness and Eurocentrism.

The June events represented a small sample of the work ARCDO undertakes throughout the year to address not only anti-Black racism across U of T’s three campuses, but all forms of racism, including Islamophobia and anti-Semitism. The office also works to identify how racism intersects with other forms of discrimination such as homophobia and ableism.

Glean says racism is not always as obvious as someone using a racial slur.

“It’s in certain behaviours, comments and conduct that may contribute to feelings of not belonging or of being invisible,” she says. “It can be, for example, when a Black manager is with a white colleague and people assume the white colleague is the manager.”

Karima Hashmani, executive director of equity, diversity and inclusion across the three campuses, says the U of T community has a collective responsibility to ensure everyone feels valued and seen.

She has seen a surge in requests for her Equity Office team to provide anti-racism advice, training and support.

“I am lucky to have the dedicated ARCDO and Equity Office teams that are working tirelessly during the pandemic to meet the needs of our community,” Hashmani says. “We continue to engage, deliver training, and facilitate conversations for our community, and we are just getting started as there is much more to do.

“We are now in a different time, where not only is there a heightened awareness to listen and learn, but more importantly to collaborate to create lasting change. So, we have been engaging with faculties and divisions on ways to create that meaningful change in their strategic plans and priorities – this may include student access and inclusion, strategic recruitment and a more inclusive curriculum.”

ARCDO is already working on more programming for the fall, with specific dates and topics to be announced later this month. The second annual Race, Equity and Action speaker series will launch this fall, along with new training sessions for faculty and staff. There will also be more virtual conversations like the ones held in June.

Other parts of the university are exploring similar issues. Throughout the month of July, for example, the Centre for Ethics hosted events on the ethical issues surrounding Black Lives Matter, including policing and Caribbean perspectives on capitalism, imperialism, state violence and anti-Blackness.

In June, the equity and diversity offices at U of T Mississauga and U of T Scarborough, together with Hart House, organized two online “connection spaces” – one for racialized students and one for Black students. The events enabled students to check in with each other in the aftermath of Floyd’s death, as well as with a wellness instructor.

Nythalah Baker, the director of equity, diversity and inclusion at U of T Mississauga, says the topics students raised during the sessions weren’t necessarily new, but that the pandemic had amplified existing disparities.

“Some people can easily access virtual spaces,” she says. “For others it’s not so easy due to socio-economic status, the family situation, housing situation or other reasons. Some students face a greater risk of exposure to COVID-19 because a family member may be a frontline worker. They may face housing insecurity or food insecurity.”

Similarly, the Equity, Diversity and Inclusion Office at U of T Scarborough hosted “Diversity is Not Allyship” in June, an online discussion about anti-Black racism within racialized communities.

“It was a space for staff, students and community members to engage in self-reflective exercises and share stories and strategies around unpacking anti-Black racism,” says Winnie Falkenstein, the office’s director.

Glean says the June sessions across the three campuses only served to reinforce the importance of ARCDO’s pre-existing plans to provide Black and racialized members of the university community with more spaces and programming for restoration this year.

At U of T Mississauga, Baker says the current discussions will inform how the campus prepares for the fall term: “How can instructors ensure they’re creating a respectful and inclusive learning environment online? How can faculty be attentive to what it means to be a Black or Indigenous student, or a student of colour right now?”

U of T, meanwhile, is organizing and hosting the first in a series called National Dialogues and Action for Inclusive Higher Education and Communities this fall. The three-hour event will feature speakers from across Canada and will focus on promoting action on anti-Black racism within the higher education sector.

Co-ordinated by Professor Wisdom Tettey, vice-president and principal of U of T Scarborough, and Hashmani, the event will cover topics such as access and success for Black students, staff and faculty; inclusive teaching, learning and curricula; representation within decision-making structures; enabling community and belonging; responsibilities and obligations of non-Black peers as partners; and how best to collect and use race-based data. Faculty, staff, students and senior administrators from across Canada will be invited to participate.

“Engaging in dialogue is important and intentional action is critical” says Hashmani. “I’m hopeful this will lead to more collaboration with the many U of T staff and faculty who are committed to champion equity, diversity, and inclusion across the three campuses.”