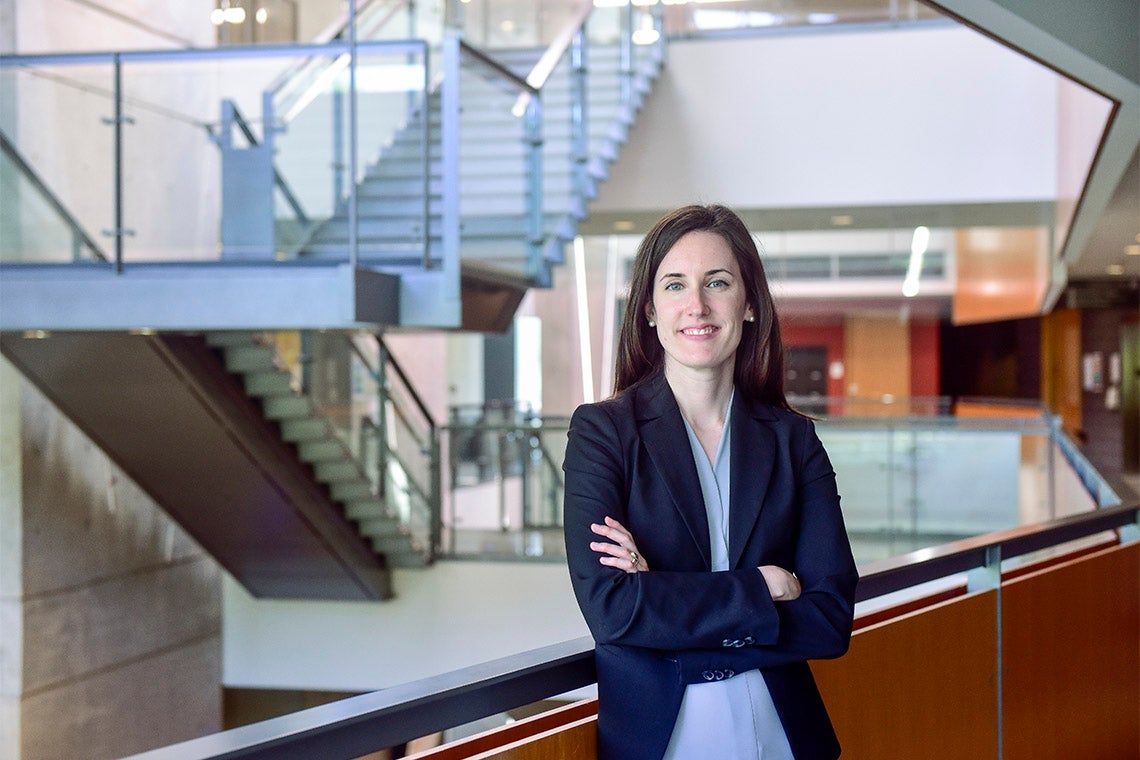 “It’s important to look at pregnancy because chronic disease isn’t commonly a factor that physicians use to screen for perinatal mental illness risk,” says U of T Scarborough's Hilary Brown (photo by Ken Jones)

A new study led by a University of Toronto researcher has found that women with chronic physical conditions are more likely to experience mental illness during pregnancy or shortly after giving birth.

“Women with a chronic physical condition like diabetes, hypertension and asthma may benefit from targeted strategies to reduce their risk of mental illness,” says Hilary Brown, an assistant professor at the Interdisciplinary Centre for Health & Society at U of T Scarborough.

The study looked at more than 850,000 women in Ontario aged 15 to 49 during their perinatal period, which extends from conception to one year after birth. It found that those with a chronic physical condition (20.4 per cent) were more likely than those without (15.6 per cent) to experience mental illness during pregnancy or postpartum.

The researchers defined a perinatal mental illness as diagnosis of a psychotic disorder, mood or anxiety disorder, substance use disorder or an addiction from conception to one year after giving birth.

Brown, the study's lead author, notes that they looked at any physical condition that lasts more than one year and has an impact on functioning – including diabetes, arthritis, heart disease, hypertension and asthma.

Women with a chronic physical condition may be at an increased risk of mental illness for a number of biological and social reasons, Brown says.

For one, research suggests that a lot of chronic physical conditions are characterized by chronic inflammation, and that mental illness could be triggered by similar biological mechanisms. There’s also the possibility that both could have genetic links.

“The social reasons include the stress of managing a chronic disease, managing pain, fatigue or sleeplessness – these are all things that come with many chronic physical conditions,” she says.

This study builds on previous research that shows chronic physical conditions increase the risk of mental illness in the general population, but this has rarely been studied in pregnant women.

“It’s a real missed opportunity,” says Brown, an expert on reproductive as well as maternal and child health.

“It’s important to look at pregnancy because chronic disease isn’t commonly a factor that physicians use to screen for perinatal mental illness risk.”

The study, which is published in the journal PLOS Medicine, received funding from a Canadian Institutes of Health Research (CIHR) grant.

Brown says the findings highlight the need to better identify and help treat women in this group. She says targeted strategies should include those that help support chronic disease management and improve coping.

While mental illness negatively affects mothers, infants and families, only about one-third of women with perinatal mental illness get the care they need. These women don’t receive care for a variety of reasons, notes Brown.

“There remains a stigma attached to mental illness, there may be transportation and child care challenges for new mothers, not to mention significant systemic barriers as well.

“We have an overstressed health-care system that often lacks resources for women to receive timely diagnosis and care. Identification of high-risk groups, like women with chronic physical conditions, could make the health system more efficient.”