The wisdom of crowds: U of T PhD student builds "swarm intelligence" robots 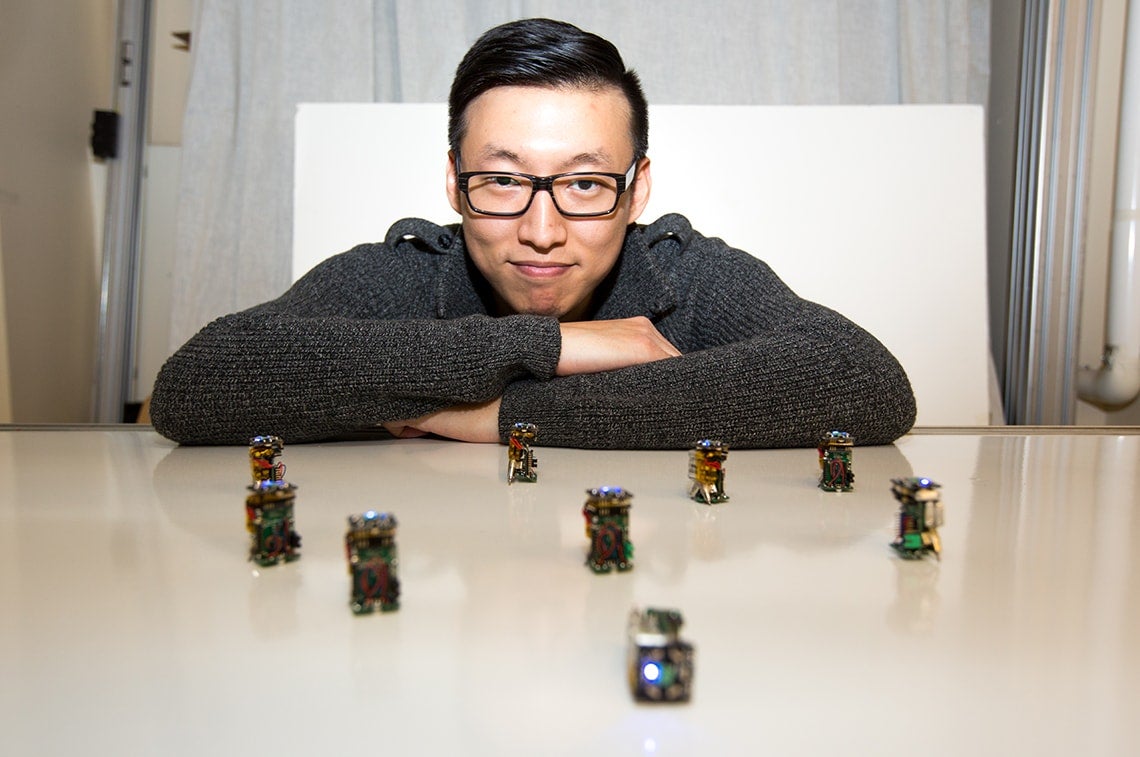 A single ant or termite is not very intelligent, but in large groups they can perform complex and useful behaviours – like protecting each other or securing food – that make the entire colony seem smart.

This, in a nutshell, is the kind of intelligence that Justin Kim, a PhD student in engineering, is trying to bring to tiny robots he’s been building over the past seven months in a basement lab of U of T’s mining building.

The robots are not much bigger than a human thumb – 32 mm tall to be exact. Their brain is a 32-bit processor, and they move and turn using two tiny motors. With the help of infrared signals, they can locate their fellow robots and interact with them in particular ways.

To demonstrate, Kim powers up nine of the robots and spreads them several inches apart on what looks like an air-hockey table. He explains that each robot uses an infrared sensor to determine if there is another robot nearby and if so, move toward it.

If not, the robot will pause and wait until another robot passes by. Over the next minute, the robots silently twist and inch closer to each other, slowly clumping together.

Kim emphasizes that he doesn’t program the robots to exhibit the desired collective behaviour. Rather, he gives each one a few simple rules.

For example, to get the robots to form a chain, Kim programs them to “follow a nearby robot if you see one” and “not collide into other robots.”

“They would have no idea that they were supposed to form a chain,” he says. “But that’s the collective behaviour that emerges.”

Although “swarm intelligence” – a branch of AI – is still in its early stages, Kim envisions plenty of potential applications like rescue operations during earthquakes.

“Most of the time human rescuers can’t get through the rubble,” he says. “The robots could be equipped with cameras and a light source that would wirelessly provide video to human supervisors monitoring the swarm.”

In space, such robots could be used to explore other planets or asteroids. Shrunk small enough, “micro-robots” deployed inside the human body à la Fantastic Voyage could be used to attack cancerous tumours, or clean plaque from blood vessel walls.

Worldwide, many researchers are working on various aspects of swarming robots, but Kim says his creations are more modular, meaning that other scientists can easily switch out “off-the-shelf” components without having to rebuild the entire robot.

Kim, who joined the U of T Robotics Association as a first-year engineering student, says his immediate plans are to continue with his thesis under the direction of U of T's Engineering Professor Beno Benhabib and Associate Professor Goldie Nejat – and to keep learning. “It’s an interdisciplinary field so it’s exciting to see what other researchers think of when they build a robot,” he says. “Everything is new and exciting.”