'Willpower in a nutshell': Against the odds, Elspeth Arbow is working towards a U of T degree despite cystic fibrosis 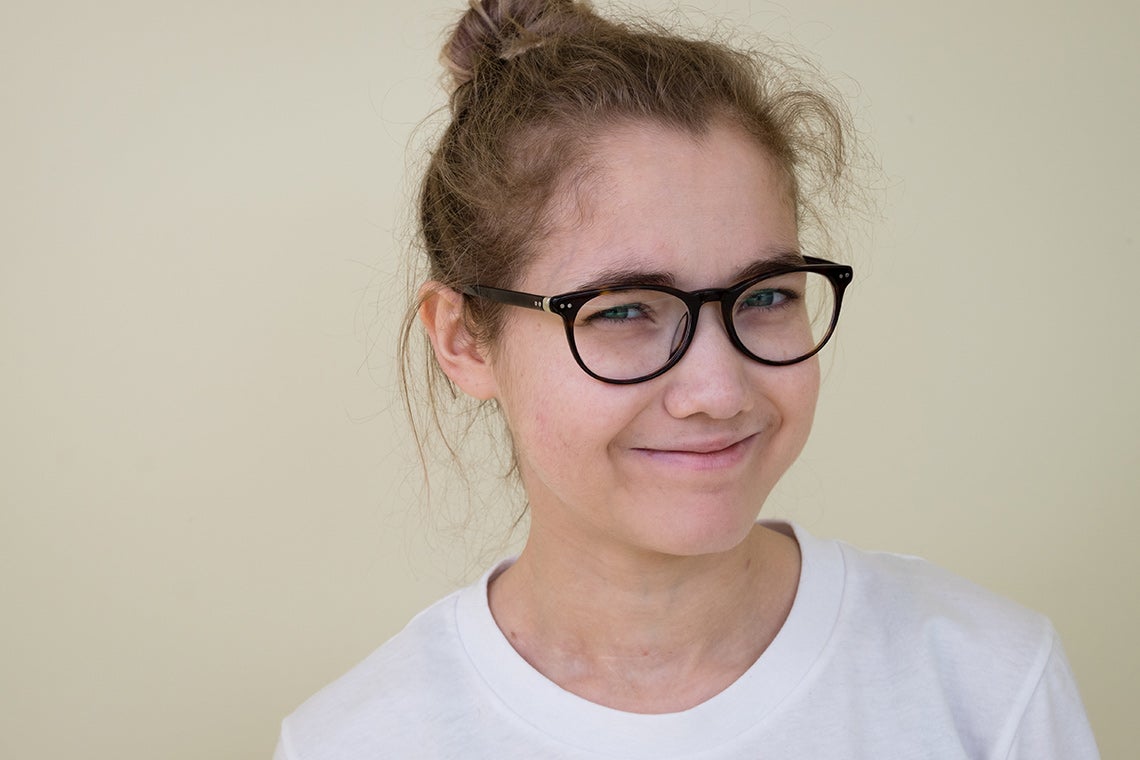 If there is one thing to be learned from her example, Elspeth Arbow says, it’s that “people underestimate their abilities” (photo by Geoffrey Vendeville)

The physiotherapy gym at Toronto General Hospital looks just as you would expect. It’s equipped with treadmills, a rack of light dumbbells and motivational posters on the walls. One poster says, “SUCCESS: It is not the position you stand, but the direction you look,” beneath a photo of a sunrise in a valley. But a far more realistic picture of success and resilience isn’t tacked onto the wall. It’s the slim girl walking on a treadmill in white Converse sneakers, leggings and a T-shirt.

Elspeth Arbow is a 22-year-old undergraduate in cinema studies at the University of Toronto. She looks half the age of the next youngest patient in the gym that day. A few people comment on her T-shirt, which says, “The future is female.” She acknowledges the compliments with a quick: “Yeah, we’re taking over.”

She exercises to strengthen the pair of lungs she received in a transplant in March. She was diagnosed with cystic fibrosis as a baby, a genetic disease that affects the lungs and often the digestive system. In the fall semester, while other students went home or to the library after class, she often went to hospital. More than a month after her operation, she still goes several times a week for tests and physio, to fortify her 89-pound frame. 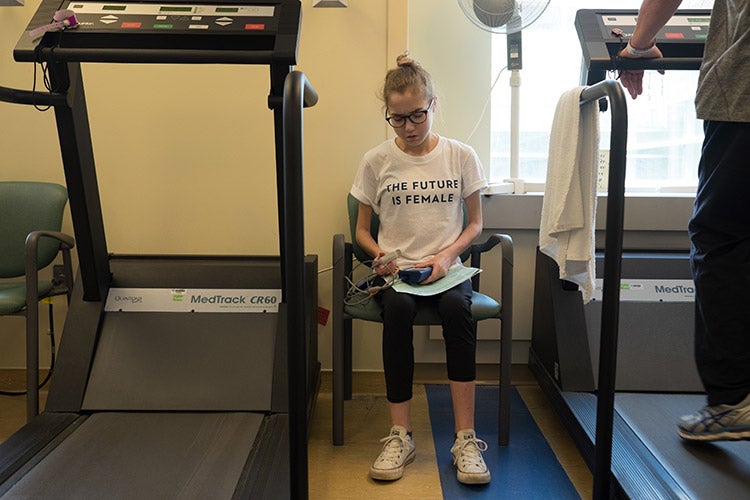 Arbow has been in this situation before. It was her second double-lung transplant in the space of nine years. Jayme Muir, a U of T student on a physiotherapy placement, marvels at Arbow’s progress. “That’s willpower in a nutshell,” she says.

Arbow’s willpower – she would say her stubbornness – and the help of family, friends, doctors, nurses, teachers and university staff have helped her complete 4½ years of university against the odds. Even when she became so sick she needed to carry an oxygen tank in her backpack, she still kept up with her courses.

It’s hard to tell Arbow’s story without resorting to the kinds of clichés on the posters at her gym. But if there is one thing to be learned from her example, she says, it’s simply that “people underestimate their abilities.”

Given two days to live – then a match

There was a time when it seemed Arbow wouldn’t live long enough to go to university.

At age 12, her health deteriorated to the point that she was placed on the Canadian lung transplant list. She and her mom, Judith, had to move from their home by the water in Saint John, N.B. to Toronto to be closer to SickKids hospital.

“They took her to the ICU because she was filling up with carbon dioxide,” Judith recalls. “They started singing Kumbaya all around us. Palliative care was in full swing.”

Doctors gave Arbow two days to live, her mother says. Then, miraculously, they found a match. “We were in the ICU laughing, joking and crying. We couldn’t believe it,” Judith says.

“Her CF (cystic fibrosis) lungs were pretty rotten,” she adds. “They commented when they took them out in surgery that they were green. I didn’t need to know that.” 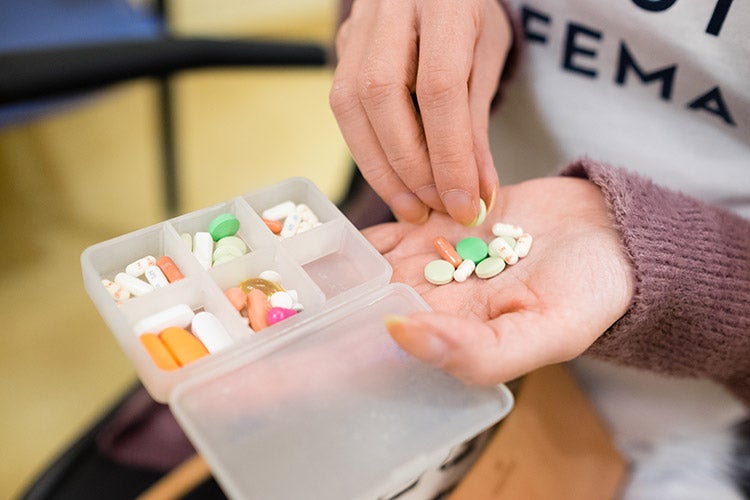 Arbow was well enough to fly back to New Brunswick a week before Christmas, 2009. Family, friends and a local news reporter met her at the airport under a banner welcoming her home.

Between hospital visits in Toronto, she discovered the Toronto International Film Festival. One summer, she marathoned nine movies in less than a week.

It wasn’t the red carpet and the stars that impressed her so much as the crowds of cinephiles. She enjoyed seeing films with people who stayed in their seats after a movie till the last credit, like she did. She applied to cinema studies at the University of Toronto in the hope of becoming a festival programmer.

Only a month before starting at U of T, Arbow got unexpected bad news. She was told her new lungs were in chronic rejection: Her immune system was attacking the organs. She would need a second double-lung transplant.

“I didn’t know that they kind of had an expiry date,” Arbow says. “I wasn’t necessarily in disbelief. More like denial. I’ve been fine and normal for the past four or five years.”

Although her lung capacity was dropping, she had stubbornness to spare. She carried on with university and became involved on campus. She wrote about accessibility issues, like the need for more volunteer note-takers, in the campus paper, The Varsity. She told her story on video for a campaign to register organ donors in Ontario. And she brought her energy to Innis College Council.

Her efforts earned her a Gordon Cressy Student Leadership Award. “Elspeth Arbow personifies the spirit of student involvement,” wrote Charlie Keil, the principal of Innis College and a professor of cinema studies, in the nomination form.

But once in a while, Arbow second-guessed herself. A voice in the back of her head was saying: “You shouldn’t necessarily be here right now.”

In the summer of 2017, her health worsened and she was put back on the lung transplant list. 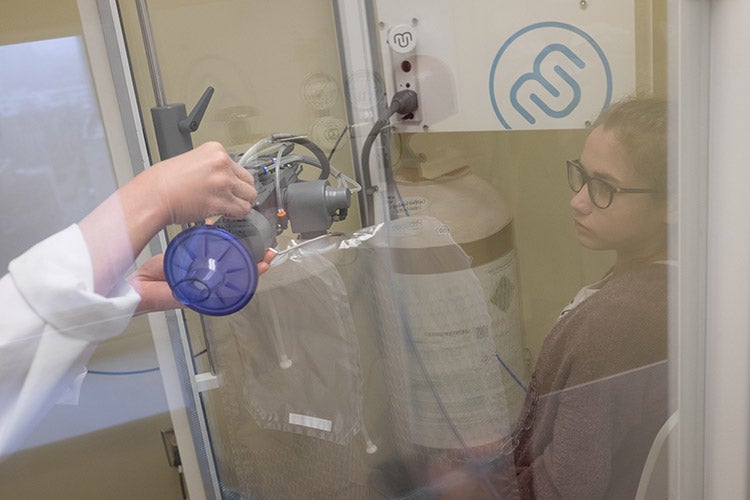 Arbow's lung capacity was measured last week at 39 per cent, one percentage point higher than the previous week (photo by Geoffrey Vendeville)

Keil says Arbow was visibly winding down: “Everything was slower and just diminished.” That semester Arbow was so ill she skipped lectures and went only to tutorials bringing oxygen.

She tried to maintain a sense of normalcy. “I was adamant that I still had a social life, albeit a very uneventful one,” she says. “Meanwhile, my doctors were like: How are you even sitting up?”

Her mom moved back to Toronto from Saint John into a basement apartment in the home of Arbow’s former transplant nurse at SickKids.

Arbow still hoped to graduate this summer. Instead of tempering her expectations, Innis College Registrar Donald Boere did what he could to help, including asking her professors for copies of their lecture notes.

“At no point was he ever like, ‘Elspeth get down to Earth. There’s no way you can do that,’” she says.

But in the New Year, Arbow’s health continued to wane and her spirits crashed. She told Boere she needed to drop all but one of her courses. “He was just as sad as I was,” she recalls.

More than nine months went by without an organ match. Then one day, while waiting for physio in the hospital Starbucks, she got the call.

Reality didn’t set in until someone at the hospital told her the OR was booked for 9:30 a.m. on March 24.

In the surgical suite before the transplant, she spoke to her doctors about the future and whether she would need a third pair of lungs. They said they had never done a third lung transplant on the same patient before. “Well, I’ll be your first,” Arbow told them.

Her mom stayed in the waiting room for the length of the operation, 17½ hours. The operation was longer than average because of scarring on Arbow's lungs that made them stick inside her chest cavity.

About halfway through the procedure, Judith found someone wearing blue scrubs outside the OR and asked them about Arbow’s progress. The team updated her every two hours thereafter.

“I was mostly on my own in a bubble of prayer and positive energy and worry and maternal stuff,” Judith remembers. 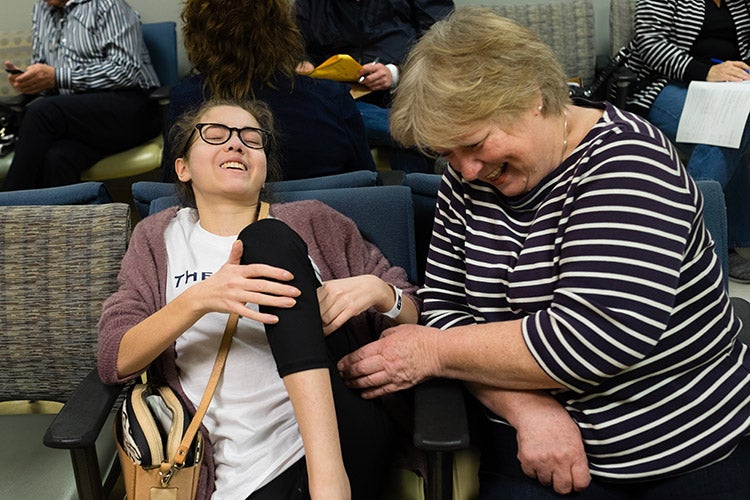 Arbow’s first memories after the operation are hazy. She remembers her dad Michael and brother Hamish milling around her bed. The moment she was taken off a breathing machine was not as dramatic as one would expect.

“There’s this video going around online right now of a woman taking her first breath on her own after a lung transplant,” Arbow says. “I saw that video and I was like, this girl is so hopped up on drugs. There’s no way she knows what’s going on. But no one else would know that.”

“It’s a nice moment but it’s mostly relief more than wonder,” she adds.

Much of the research that went into saving her life was done years ago by scientists at her university. In 1983, a team at Toronto General Hospital led by Dr. Joel Cooper, then a U of T professor of surgery, performed the first successful lung transplant on a 58-year-old hardware executive with pulmonary fibrosis.

In 1989, a team led by Dr. Lap-Chee Tsui, a geneticist at SickKids hospital and U of T, helped discover the major gene defect that causes cystic fibrosis, raising hopes for better diagnosis and treatment.

Today, the University Health Network, which includes the Toronto General Hospital, is one of the largest adult organ transplant programs in North America. One reason for its success is the Toronto XVIVO Perfusion System (ex vivo means outside the body), which preserves high-risk donor organs so they can be safely transplanted

Dr. Shaf Keshavjee, surgeon-in-chief at UHN and a professor of thoracic surgery at U of T, led the development of the system. It is “the single biggest contributor to increasing the number of organs we can use for saving more lives,” he told the Toronto Star.

By registering for organ donation, one person can save eight lives, he added. “I think, when people see the good that comes out of it, there really is no reason not to sign your organ donor card.”

In hospital, Arbow was visited by friends, family and people from the university. Keil, the Innis principal, brought her cupcakes.

It was there that she celebrated her birthday. 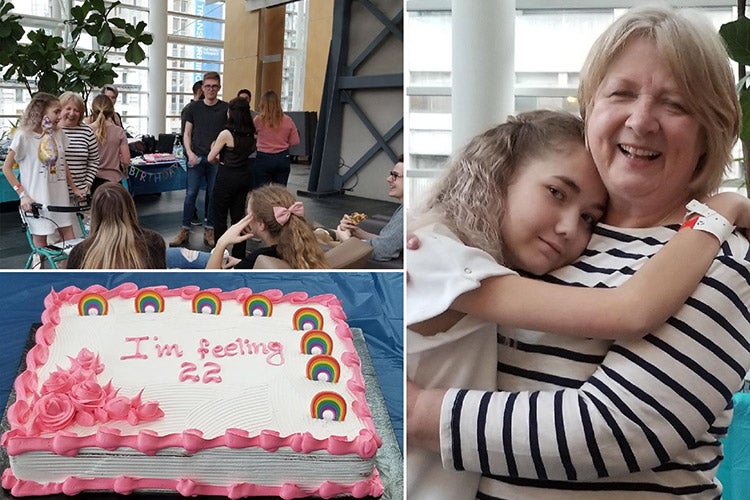 Modest plans for pizza and cake turned into a party in the fourth-floor atrium with more than a dozen guests, decorations and games, including a scavenger hunt in which people looked for the weirdest object they could find in the building — without disturbing other patients. One person came back with an anatomical model while another returned with an easel.

She couldn’t use candles because it was against hospital rules, but a friend held out the flame of his lighter. She blew it out in one breath.