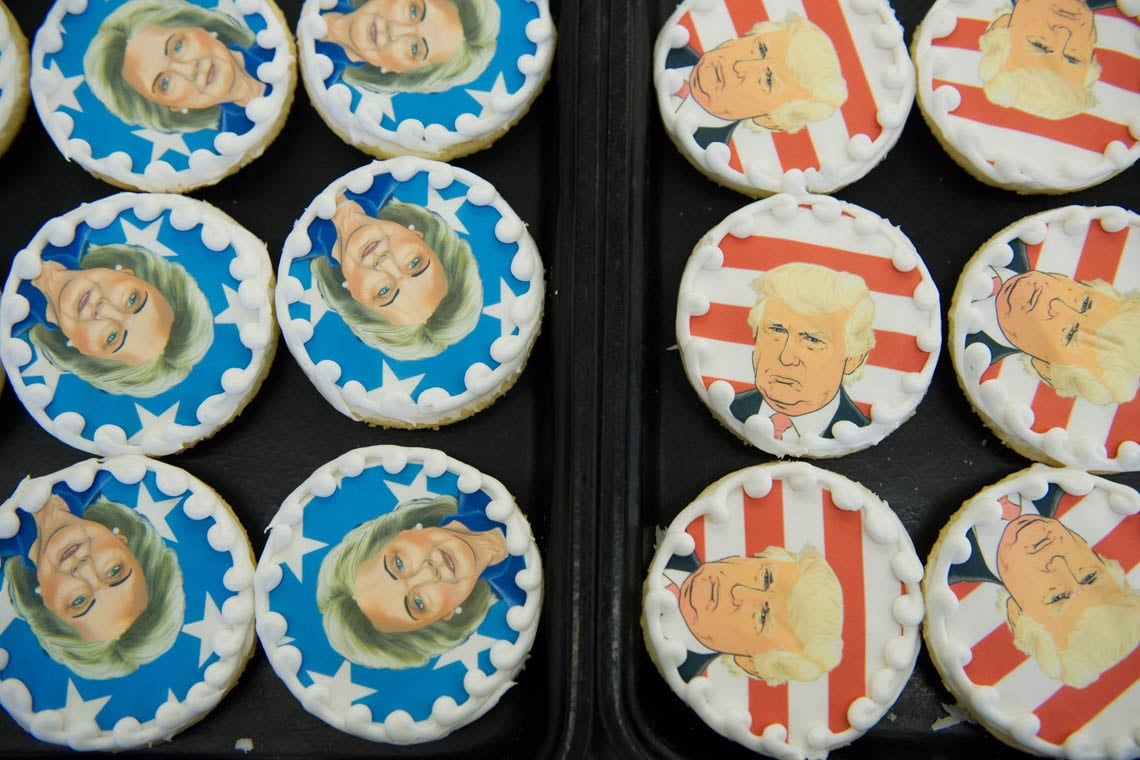 The long 2016 U.S. election campaign finally draws to an end as millions of Americans go to the polls today to choose their next president.

Much of the media focus has been on the bitter race between Hillary Clinton and Donald Trump. U of T News asked U of T Scarborough political scientists Ryan Hurl and Renan Levine for their thoughts on what states to pay attention to and what happens if this ends in another disputed election.

A coin toss of an election: Ryan Hurl It’s been a roller-coaster of a campaign. What’s your prediction?

I have no idea. I think it’s a coin toss. Four years ago, the polls were off by two to three per cent. A shift of that margin in some of the states could affect things.

I think you can rule out a Trump landslide, and you can probably rule out a Clinton landslide. As for the other possible options – a narrow Trump victory or a narrow Clinton victory –  I think the most likely outcome is a relatively narrow Clinton victory based upon her taking Florida and taking almost all the other states that President Barack Obama won except Iowa.

What should Canadians be watching for tonight?

We know with a fair amount of certainty what’s going to happen in the House of Representatives. Out of 435 seats, there are really only 22 that are competitive, and so the Democrats would need a landslide election by their candidate for them to retake the House. In the Senate, the differences are much smaller, but it’s possible for the Democrats to retake the Senate. The most likely outcome is a narrow majority for either party.

In terms of what to look for at the presidential level, the path for Trump is exceedingly narrow. If he loses any one of three states – North Carolina, Florida or Ohio – I can’t see any path to victory. But there is a possibility that the polls really are missing something in terms of the number of core Trump supporters – white males lacking college education. If there’s a big shift in the voter turnout in states like Pennsylvania or Michigan, the results could be unexpected.

I don’t think that’s going to happen, but there is a small possibility.

What can we expect for the next four years if Clinton does win?

It may be the case that Clinton is going to be more effective working with Congress than Obama was. Perhaps she’ll be willing to concede more. If she only wins a narrow victory, that means she’ll have almost lost to a really weak Republican candidate, and she will be looking towards 2020 when she’ll be running against a much more competent candidate who might be raising some of the same issues that Trump was.

On the other hand, any compromise that she might make with Republicans in the House or the Senate has the potential of creating some kind of left-wing insurgency. So she’s going to be faced with a very difficult strategic position. One possibility is already in the works – Senate Democrats and Republicans are thinking about some kind of compromise on corporate tax reform and infrastructure spending, which will mean some kind of reform to the corporate tax. A lot of those in the Democratic Party’s left – the Bernie Sanders wing – will have problems with this.

Beyond that, it’s very difficult to see – particularly in terms of working with the House Republicans – any collaboration on, for example, significant immigration reform.

There are some issues that the government needs to address, particularly health care. That’s an incredibly difficult issue to deal with, precisely because some of the most heavily organized interest groups in the country, particularly retirees, don’t want to take any kind of loss in terms of health-care spending or any significant health-care reform.

If Trump doesn’t accept the results, will that have an effect on Clinton’s legitimacy?

It’s difficult to say because it remains to be seen what Trump is going to do. If the results are beyond any possible margin of fraud, then I don’t think it’ll be a problem. If we end up in a situation like the year 2000, I think there’s the potential for real trouble. Let’s just hope it’s a decisive outcome, and we know who the president’s going to be because this has been so divisive that I don’t know if the nation can take another disputed election.

Is this level of divisiveness new or has there always been this kind of polarization?

The nature of polarization is changing. If you think about what Trump has done, he’s focussed on policy areas where there’s actually a significant amount of overlap between the two parties. The main issues raised by Trump – immigration reform, foreign policy and trade – those are actually areas where there was a lot of middle ground. But it turns out that a lot of Republican voters don’t accept that middle ground. I think that the parties have become more polarized across a lot of issues. What Trump shows is that the focus of that polarization might be changing.

Why North Carolina and Nevada may be the key battlegrounds tonight: Renan Levine If Hillary Clinton wins North Carolina will that pretty much tell us who will win the election?

Let’s put it this way: If Hillary Clinton wins North Carolina, and especially if she wins big there, you can spend the rest of the night binge-watching Netflix because the outcome will not be in doubt. If the race is too close to call, or if Donald Trump wins North Carolina, nervous Democrats and excited Republicans will have to wait for the returns from Nevada.

Why is North Carolina so important to presidential elections?

North Carolina is what’s called a purple state – it’s not clearly Democrat or Republican.  That’s because of its demography, size and voting history. North Carolina was one of two states that Barack Obama won in 2008, but lost in his bid for re-election in 2012. Republican Mitt Romney beat Obama in North Carolina by only about two per cent. The only state with a narrower margin of victory was Florida.

The size of North Carolina’s population is key. It is population size that determines how many votes the state gets in the electoral college. Every state gets a minimum of three votes  and then more votes are allocated based on population. The most populous state, California, has 55 votes. Traditional battlegrounds Florida and Ohio have 29 and 18 votes respectively. North Carolina, with 15 votes is a much bigger prize than other battleground states this year. New Hampshire has four, while Iowa and Nevada both have six.

Why is North Carolina usually such a close call?

The population there is a mix of African-Americans and educated whites in large urban areas – these are traditionally Democratic voters. North Carolina’s small towns tend to have conservative white constituents who tend to vote Republican. And there is a growing Latino population in the state, an important voice in this election. North Carolina will be kind of a bellwether: if Clinton does well there, she can expect to do well in other states with even larger urban areas populated by minorities and well-educated whites like Michigan and Pennsylvania.

So if Trump wins North Carolina, why does Nevada become important?

Nevada is another battleground this year.  Democrats usually win Nevada when they win enough votes in Las Vegas and its surrounding suburbs to overcome Republican majorities in the rest of the state. While Las Vegas has a large Latino population, it also has an unusually large population of whites without university degrees, a demographic that is among the most receptive to Trump. So while Democrats are well-positioned, Republicans also have hope that they can do well enough in Las Vegas to win the state’s six electoral college votes.

But Nevada, as well as small states like New Hampshire and Iowa, will not matter much if North Carolina goes to the Democrats. North Carolina’s 15 electoral college votes almost entirely make up for the loss of all three of those states.

Is there a scenario where both candidates won’t get the necessary 270 seats to win the election?

Yes. It’s possible that the election won’t be decided even if Trump wins North Carolina because there is one scenario that could still keep him from getting the 270 electoral votes he’ll need to win. Evan McMullin is an independent Republican running as a third-party candidate in Utah. McMullin has strong support from fellow Mormons who distrust Trump. If McMullin ekes out a victory in Utah, he can stop Trump.  So even if Trump wins everywhere else Romney won (including North Carolina) in 2012, and he gets the five “blue” states considered battlegrounds –Florida, Iowa, New Hampshire, Nevada and Ohio – there wouldn’t be a decision in that scenario. Clinton would have 269 electoral college votes and Trump 262 in that case. If that happens, the election will be determined by the House of Representatives. That’s only happened once before, almost two hundred years ago in 1824!