Why was there open water instead of ice north of Greenland this year? U of T expert has an answer 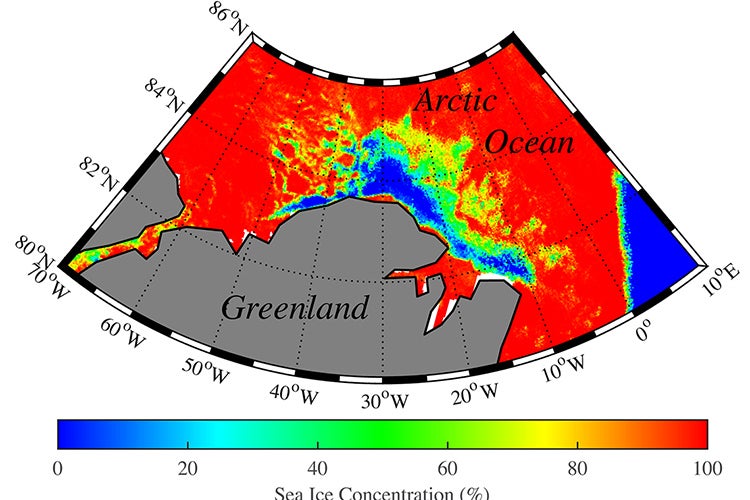 A look at sea ice concentration on Feb. 25, which shows a polynya north of Greenland (image courtesy of Kent Moore)

In the depths of the long night that cloaks the Arctic in frigid darkness for three months each winter, a surprising patch of open water appeared, just to the north of Greenland.

It was a polynya – an area of unfrozen water surrounded by the polar ice pack. Though not especially rare in some parts of the Arctic, the north Greenland polynya of February of this year was an unexpected 50,000 square kilometres of open water in the Wandel Sea, an area the size of the province of Nova Scotia.

The Wandel is part of a region known as the last ice area. It abuts northern Greenland and Canada’s Arctic Archipelago, and sea ice there is expected to persist longer than anywhere else. As recently as the 1980s, its ice cover was thicker than an elephant is tall. Today, it’s about half that.

Was this unusual polynya another harbinger of climate change?

That was the initial hypothesis of a team led by the University of Toronto's Kent Moore and Axel Schweiger of the University of Washington’s Polar Science Center. Polynyas had not previously been observed in the region, and temperatures in north Greenland had been startlingly warm, as much as 30 degrees Celsius above average.

But as Moore, a professor in the department of chemical and physical sciences at U of T Mississauga, dug deeper with his colleagues from the Polar Science Center, an alternative explanation emerged.

In their paper, What caused the remarkable February 2018 Greenland Polynya?, Moore, Schweiger, Jinlun Zhang and Mike Steele identify the polynya’s cause to be strong surface winds catalyzed by a dramatic warming in Earth’s upper atmosphere known as a Sudden Stratospheric Warming.

“During these events, temperatures in the stratosphere – about 30 kilometres above ground level — can warm by 10 or 15 degrees Celsius in just a few days,” Moore says.

“This causes a change in air circulation that includes a reversal in the winds in the stratosphere. These high altitude winds blow against the west-to-east direction of the jet stream, descending toward the Earth’s surface. In February 2018, this caused winds from Siberia to blow cold air into northern Europe, creating a weather system that became known as the Beast from the East. It brought temperatures of -20°C to northern Europe, and the same weather pattern moved warmer air northwards up the east coast of Greenland.”

Strong southerly winds forced mild air to Greenland and beyond, but it wasn’t their warmth that caused the polynya. “Most Arctic warmings last a day or two,” says Moore (pictured left). “This lasted a week, and these were the warmest temperatures and strongest winds observed in north Greenland since observations began in the 1960s. Winds were close to hurricane force and temperatures were above freezing. Once we got that piece of the puzzle, we realized it could be wind rather than warmth that caused the polynya.”

While the size of the polynya was unprecedented over the period that researchers have good data, it appears not to be tied to the thinning of the ice pack that has occurred over the same period. Simulations with the University of Washington’s Pan-Arctic Ocean Modeling and Assimilation System (PIOMAS) indicate that similar conditions would have created a polynya, even without the recent thinning of the ice north of Greenland.

Their findings: Similar wind speeds would have caused the polynya to occur even in years with thicker ice, while weaker winds would not have resulted in the 2018 north Greenland polynya, despite thinner ice conditions.

“We used to ask the question hypothetically: What would have happened if the ice had been as thick as in 1979,” says Schweiger.

“Now, we simulate it. The answer was that the thinning of the ice didn’t matter much, but strong winds were responsible.”

A longtime sea ice researcher, Schweiger was surprised. He thought thinning ice would be the decisive factor.

“But when we looked closer, it wasn’t. Letting your intuition guide your hypothesis, then letting yourself be convinced otherwise … that’s science!”