Who’s who of ancient Athens: U of T undergrads contribute to classics research 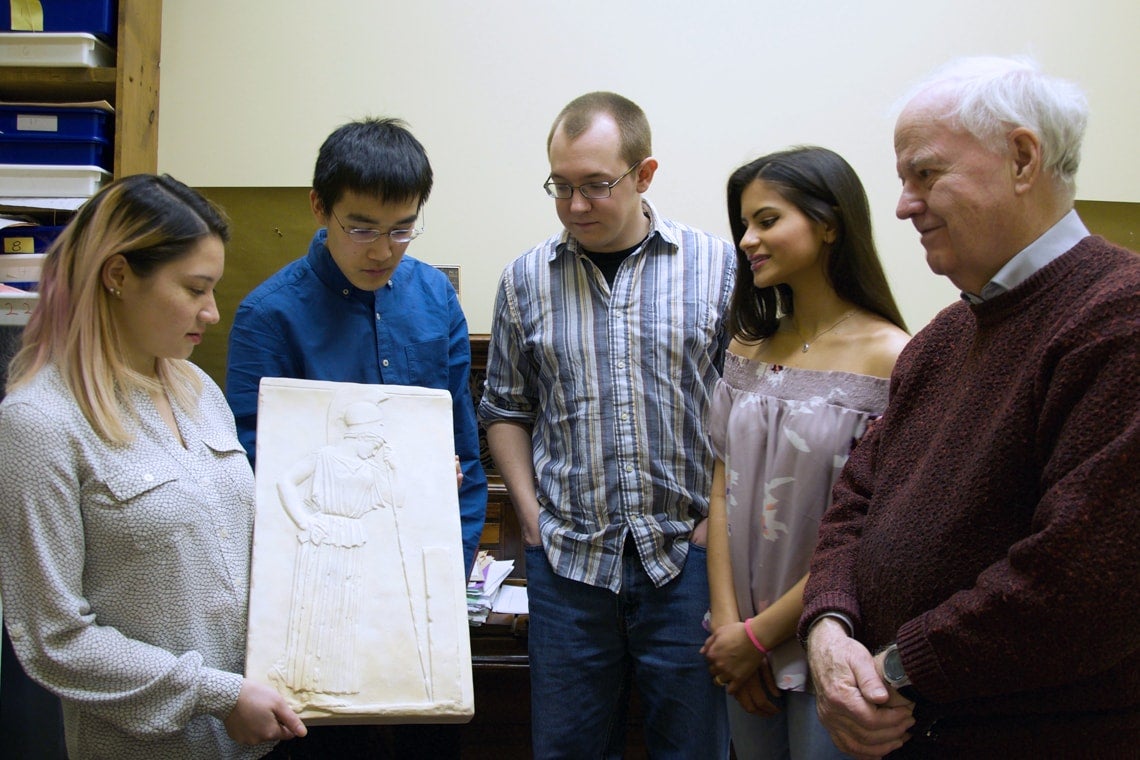 Marielle Balanaser wanted to study ancient Greek and Latin to understand the roots of medical terminology and ethics, but it was the mysterious technique behind the black- and red-figure vases of ancient Athens that really fired up her curiosity.

“It’s possible they used some sort of ingredient we no longer have, but whatever the reason, modern scholars have not been able to duplicate it precisely,” says Balanaser.

She is among the latest in a succession of students who have assisted John Traill, professor emeritus in the department of classics, to put together Persons of Ancient Athens, a book series that is the mainstay of a Faculty of Arts & Science undergrad research project.

A second-year student majoring in biochemistry and classics, Balanaser recently finished her year in the program with a scholarly presentation on the chemical process – called redox – that was used for the ancient vases, highlighting recent archeological discoveries of new examples of the art form.

Balanaser and students who have worked on the project in previous years can see their names in the preface to the book series, which features 100,000 or so citizens of ancient Athens. The books are part of an ongoing project started in the 1970s to catalogue information about the people – from Plato to Socrates – who were part of one of history’s great societies.

Sean Stewart’s contribution to the series was a biography of Aristotle, who strangely enough had not initially been included in the book because he was not originally from Athens. Stewart had to sift through a mountain of often contradictory research on the enigmatic Greek scholar to write his entry.

“There are tons of sources for Aristotle, but most of them were written at least 100 or 200 years after he died, and like Socrates, a whole mythology had evolved around who he was,” says Stewart, now a fourth-year student majoring in classics and classical civilization.

“So I had to try to figure out who I thought were the most reliable sources. I went through a lot of scholarship and primary sources, even translated Arabic, to help me to make up my mind.”

Traill says the undergraduates make an enormous contribution to the project, and he tailors the research to the individual interest of each student.

Working with scholarly and original source material, the students help build a growing database on ancient Athens while being encouraged to form their own critical analysis.

Joshua Zung, a third-year student majoring in classics and computer science who plays in several symphony orchestras, focused his research on scholarly works and inscriptions of ancient Greek music. He will be attending U of T’s Faculty of Law next year

He believes the influence of the Greeks on classical music can be found in works such as Sergei Rachmaninoff’s epic Isle of the Dead symphonic poem.

“The project was eye-opening for me, to see there are other forms of music out there and different ways to notate it,” says Zung.

“I went into computer science because I saw a lot of similarities between Latin and Greek, and constructing instructions for machines.”

The ability to do research in the humanities caught Abigail Ferstman’s interest when she was a second-year student.

Now completing her master’s in classics, Ferstman spent last summer at the American School of Classical Studies at Athens after spending her research project studying the beginnings of literacy in ancient Greece.

“I wasn’t planning on majoring in classics when I came into the project, but it really gave me an insight into the whole range of things you could do,” says Ferstman, who is now studying ancient Romans.