When pets become pests: U of T researcher warns about impact of booming exotic pet trade on native species 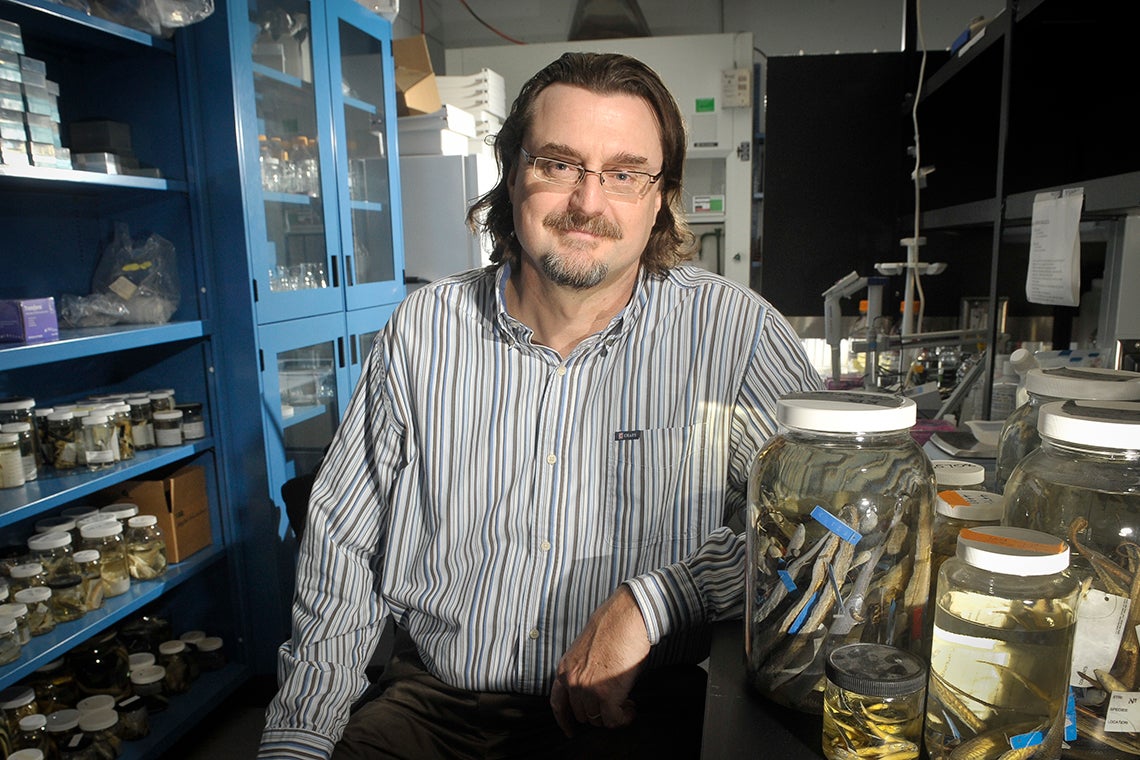 Nick Mandrak, an associate professor at U of T Scarborough, and his co-authors say the exotic pet trade has led to the establishment of several hundred non-native invasive animal species around the world (photo by Ken Jones)

The exotic pet trade is a major contributor to the spread of invasive species across the globe – and unless something is done soon, more native species and their habitats will pay the price.

That’s the conclusion of a new study by a U of T Scarborough researcher and his peers at McGill, the University of Adelaide and six American universities. The article, published in the latest issue of Frontiers in Ecology and the Environment, looks at the role that the booming exotic pet trade in vertebrates plays in introducing invasive animal species to environments where they out-compete native animals for food and threaten their homes.

“The live trade of animals for pets and food is the main source for newly introduced invasive species – and it’s becoming a big problem,” says Nick Mandrak, an associate professor in U of T Scarborough’s department of biological sciences and one of the study’s co-authors.

The exotic pet trade is a multi-billion-dollar global business – and it’s growing, the researchers say. The trade has led to the establishment of several hundred non-native invasive animal species across the world.

The numbers are unsettling. Of the 140 non-native reptiles and amphibians that have established populations in Florida, for example, close to 85 per cent arrived from the pet trade. Other research has found that 70 per cent of invasive species in Brazil over the past 30 years have come as the result of the pet trade.

It’s clear how this happens, Mandrak says. In the United States, there are about 58 million pet fish, he says. Surveys show that between two and 10 per cent of households deliberately release their pet fish into the wild, meaning at least 1.16 million fish are released each year in the U.S. alone.

“That’s a lot of fish, and that doesn’t account for birds, insects, snakes, reptiles – the list goes on,” he says.

There isn’t much research on why owners release their pets. Mandrak says it’s likely a combination of reasons: owners may not be able to take care of large, old, aggressive or sick pets, or they may have lost interest in an inexpensive pet like a goldfish.

In the Great Lakes, 30 invasive fish species have established themselves, Mandrak says, and five of them likely came as the result of pet releases. About 40 more non-native species have been found in the Lakes in smaller numbers most likely due to pet releases. These include piranhas and South American redtail catfish.

“These fish will live during the summer, but they will die when it gets cold in the winter,” adds Mandrak, an expert on biodiversity and conservation.

Although they come from warmer climes, some aquatic species can cope with the cold of the Great Lakes. Mandrak points to the discovery of armoured catfish from South America living beneath the ice in Lake St. Clair. Populations of Oriental Weatherfish, originally from East Asia, and the White Cloud Mountain Minnow, originally from China, have also established reproducing populations in the Great Lakes.

“We can’t assume that fish from places like Asia or South America are necessarily tropical because they may come from colder regions in those areas,” he says.

Goldfish – while they might not look menacing – are a big problem, Mandrak says. They reproduce rapidly and eat voraciously, ripping up aquatic vegetation and out-competing native species in the process. Some can grow quite large: The Buffalo Niagara Waterkeepers tweeted a few weeks ago that a 35-centimetre-long goldfish was caught in the Niagara River. 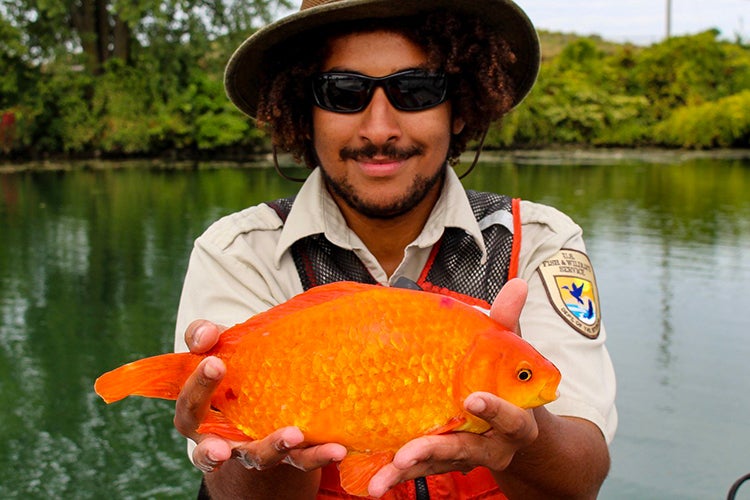 Goldfish, like this giant specimen found in the Niagara River, are a big problem for native species, according to experts (photo courtesy of Buffalo Niagara Waterkeepers)

At least three genetically different species of goldfish have established populations across Canada. Mandrak has witnessed first-hand an isolated storm water retention pond in Milton, Ont. and an agricultural drain connected to Lake Erie both teeming with goldfish.

“It was incredible, just one big gold mass of fish,” he says, adding that areas like Hamilton Harbour and parts of Lake Erie are seeing huge increases in goldfish.

Another is the red-ear slider, a turtle native to Mexico and parts of the southern U.S. that have established populations in southern Ontario and elsewhere. Not only do they compete with native endangered species of turtles, they also carry diseases like salmonella.

There are also significant research gaps Mandrak and his colleagues hope to bridge. For one, understanding the economics behind what is driving the massive growth in the exotic pet trade worldwide and why owners release their pets into the wild.

“To develop better management policies, we need to know which non-native species of pets will reach the wild, successfully reproduce and establish populations,” Mandrak says.