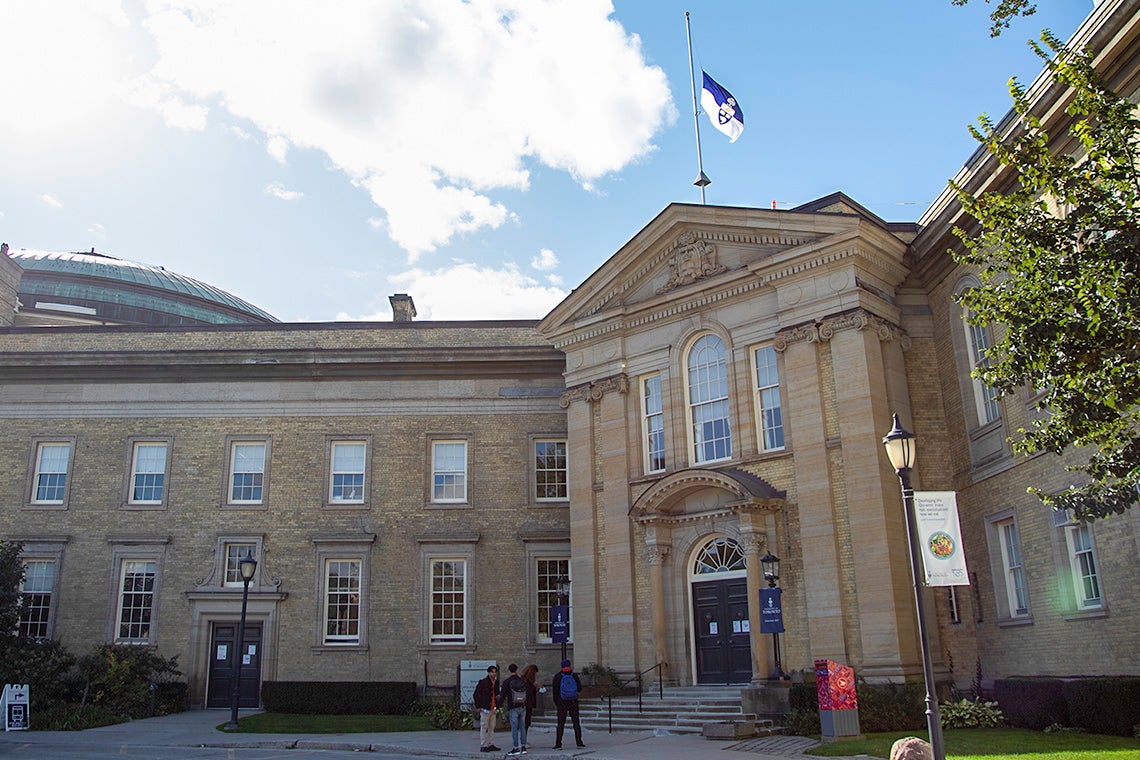 How can non-Indigenous people channel awareness of the historical mistreatment of Indigenous Peoples into concrete actions and allyship? What is the best way to teach children about Canada’s history and the legacy of residential schools? How can the University of Toronto strengthen the spirit of healing and reconciliation?

These were some of the key questions addressed by Michael White, director of First Nations House, and Shannon Simpson, U of T’s director of Indigenous initiatives, during a packed online discussion to mark Orange Shirt Day and the first National Day for Truth and Reconciliation.

For White, a member of the M'Chigeeng First Nation, the virtual event was an opportunity to reflect on the progress U of T has made in providing supports to Indigenous community members since he first arrived as an undergraduate student 20 years ago.

“My experience coming to U of T in 2001 was very different to that of a student coming in 2021,” White said. “There’s more staff, there’s more services. First Nations House was it back then – but now we’ve got services happening, we have staff at UTM and UTSC and there’s a growing Indigenous presence.” 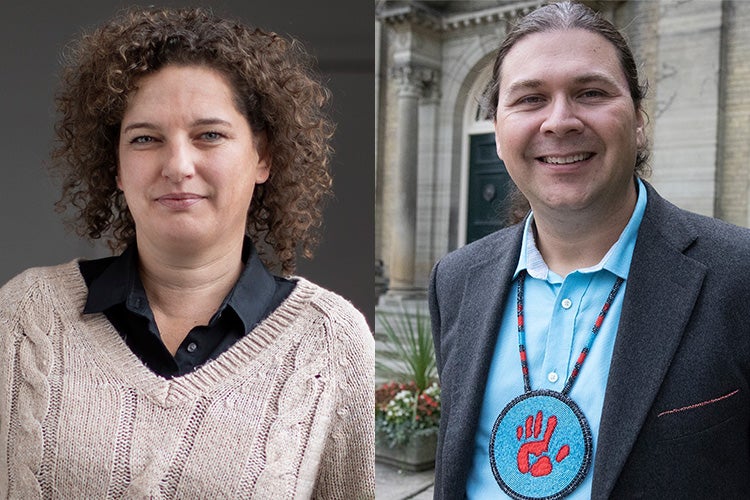 “We have [departmental] chairs within the full fabric of how this university operates. To see Indigenous representation from the leadership side right down to the student services side – I think that’s starting to happen. The wheels are slowly turning but I’m excited to be a part of it.”

The event – organized by the Office of Indigenous Initiatives and hosted by Hart House – was one of several across U of T that sought to honour survivors of residential schools, acknowledge Indigenous Peoples and traditions, and work towards reconciliation at the university and beyond. 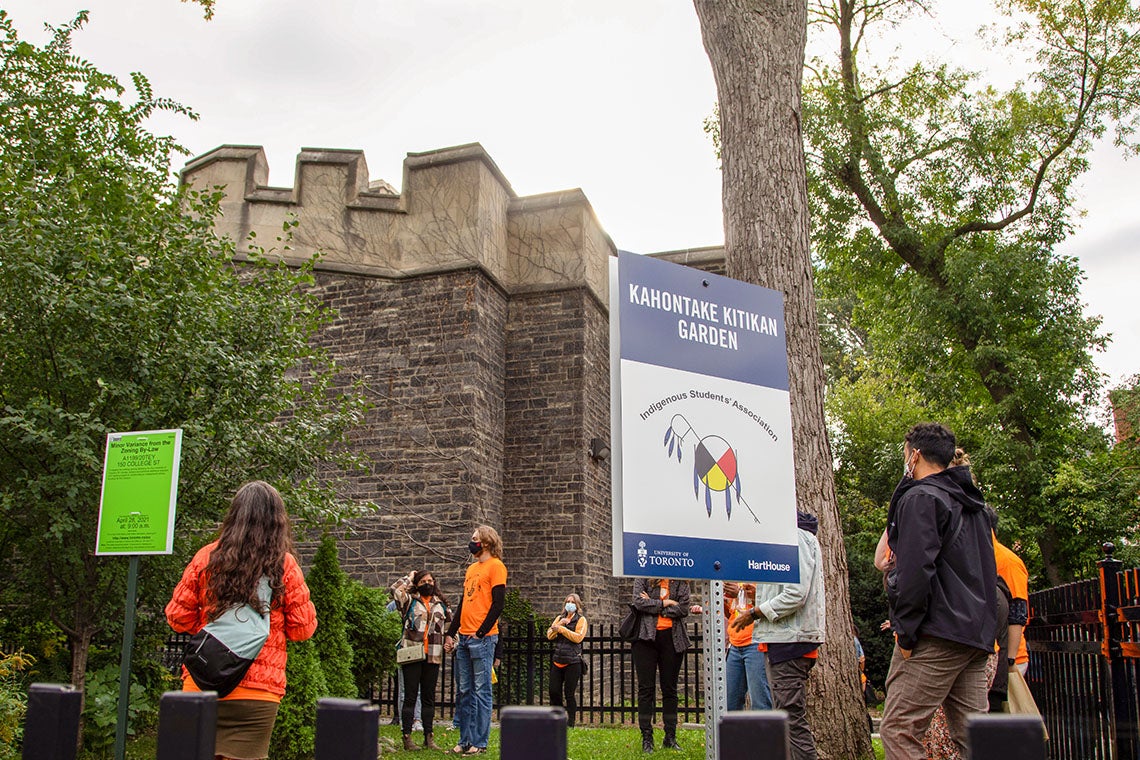 They included: an Orange Shirt distribution and campus walk organized by the Dalla Lana School of Public Health; trees lit with orange lights at St. Michael’s College; and an exploration of the Calls to Action from the Truth and Reconciliation Commission of Canada organized at U of T Scarborough. Upcoming events include the 2021 Snider Lecture at U of T Mississauga, which will feature author Robin Wall Kimmerer and explore how Indigenous and scientific wisdom can be harnessed to improve relationships between people and the natural world. 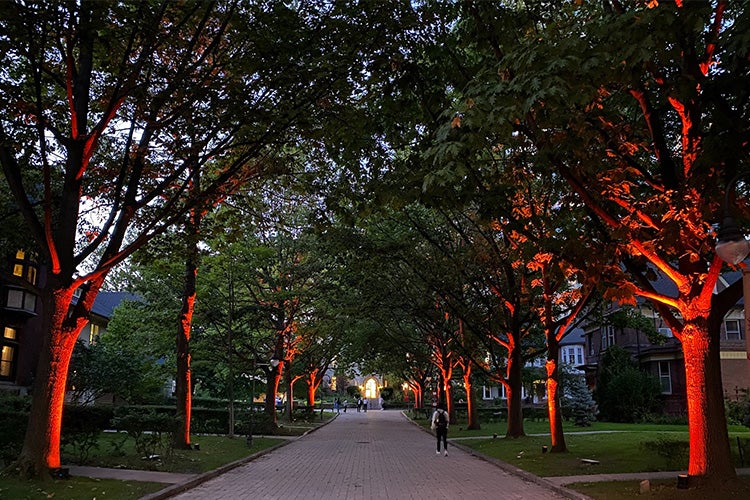 Across U of T’s three campuses, all flags were flown at half-mast to observe the National Day for Truth and Reconciliation and to honour residential school survivors, their families, and communities, and ensure that public commemoration of the history and legacy of residential schools remains a vital component of the reconciliation process.

“This year, still reeling from the staggering revelations of unmarked graves near residential schools in British Columbia and Saskatchewan, we mark the occasion with added solemnity,” said U of T President Meric Gertler in a statement. “We realize with profound sorrow that other such graves remain to be found and that these horrors come as no surprise to members of Indigenous communities.”

He added that U of T’s own Truth and Reconciliation Steering Committee has provided much-needed direction to the university. 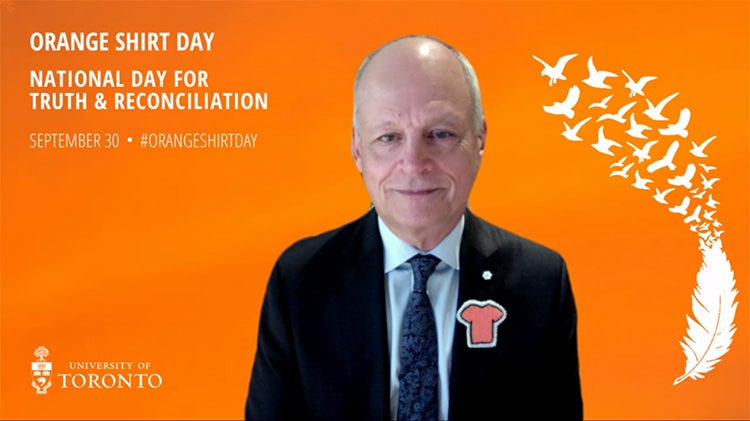 “We have made progress in many areas – expanding the presence of Indigenous students, staff, faculty and librarians; incorporating Indigenous content into curricula; supporting Indigenous research programs; and creating physical spaces to honour and acknowledge Indigenous peoples, traditions, and histories on our three campuses.

“Reconciliation must be led by dialogue, a process of mutual engagement in which all parties learn from one another.”

At the Hart House-hosted event, Simpson, a member of the Mississaugas of Alderville First Nation, said she has been encouraged with the pace of progress in recent years.

“What has happened over the last five years is happening at a pace that we’re not used to – and it’s amazing,” she said. “The growth is amazing and the amount of faculty and staff who have come on board really has shown me that the institution does care and that they are committed.

“We just want to keep that momentum going and [keep] creating these spaces.”

Simpson and White also discussed some of the areas in which they’d like to see more progress at U of T. They included positioning the university as a place that’s accessible and welcoming to Indigenous youth, attracting and retaining Indigenous students, and supporting the evolving needs of Indigenous students.

Attendees at the virtual event watched a video featuring Phyllis (Jack) Webstad from the Stswecem’c Xgat’tem First Nation, whose experience on her first day at St. Joseph’s Mission Residential School in 1973 became the inspiration for Orange Shirt Day. Aged six at the time, Webstad was stripped of the orange shirt she was wearing on the first day of school and forced to wear the school’s uniform. Today, the wearing of orange shirts has become a symbol of reconciliation, healing and allyship with Indigenous Peoples.

Kelly Hannah-Moffat, U of T’s vice-president, people strategy, equity and culture, said Webstad’s story “speaks to the enormity of the crimes committed against generations of Indigenous children.”

“Her story is a very powerful call to action for our university,” Hannah-Moffat said.

“It is crucial to acknowledge its truths as we work together to build a better institution – one that fully affirms and respects Indigenous Peoples and Knowledges, and works to remove systemic barriers for Indigenous members of our community.”

At U of T Scarborough, members of the community were invited to take part in quiet contemplation of and reflection on the impact of residential schools by tuning into a livestream of the Indigenous Garden at the UTSC Campus Farm between 8:30 a.m. and 7 p.m. on Thursday.

U of T Scarborough’s Indigenous Outreach Program in the Office of Student Experience and Well-Being is also hosting a virtual exploration of the 94 calls to action from the Truth and Reconciliation Commission of Canada.

On Oct. 1, the campus’s week-long slate of programs around Truth and Reconciliation will culminate in a Unity Celebration, with Indigenous Engagement Coordinator Juanita Muise acknowledging efforts across U of T Scarborough to foster reconciliation and celebrate in allyship.

At U of T Mississauga, the Oct. 4 Snider Lecture with Kimmerer – a professor and director of the Center for Native Peoples and the Environment at the State University of New York, a prolific author and member of the Citizen Potawatomi Nation – will tap into Indigenous and scientific Knowledges and insights on healing these crucial relationships. As well, U of T Mississauga’s Indigenous Centre has compiled a collection of online resources, books, films and podcasts that provide insights into the legacy of residential schools, intergenerational trauma and the responsibilities of both Indigenous and non-Indigenous peoples today.

The online portal also suggests ways that all members of the U of T community can take meaningful actions to support Indigenous Peoples, amplify Indigenous voices, support Indigenous organizations, foundations and communities; and support the Truth and Reconciliation Commission’s Calls to Action.

U of T’s Office of Indigenous Initiatives, meanwhile, offers Indigenous cultural competency training for all students, staff, faculty and librarians that can be accessed through the  Centre for Learning, Leadership & Culture (for staff, faculty and librarians) and the Career & Co-Curricular Learning Network (for students). The series includes the following sessions: Speaking Our Truths: The Journey Towards Reconciliation (Part 1 and Part 2); Reconciliation: Walking the Path of Indigenous Allyship; and Reflecting on Land Acknowledgements.

President Gertler acknowledged there is much work to be done.

“Highlighting our accomplishments does not diminish our responsibility or our resolve,” he said.

“Indeed, Orange Shirt Day speaks to the enduring trauma experienced by Indigenous peoples. We pause today to recognize our past, acknowledge our present – and recommit to a better future.