What is solidarity? During coronavirus and always, it's more than 'we're all in this together': U of T expert 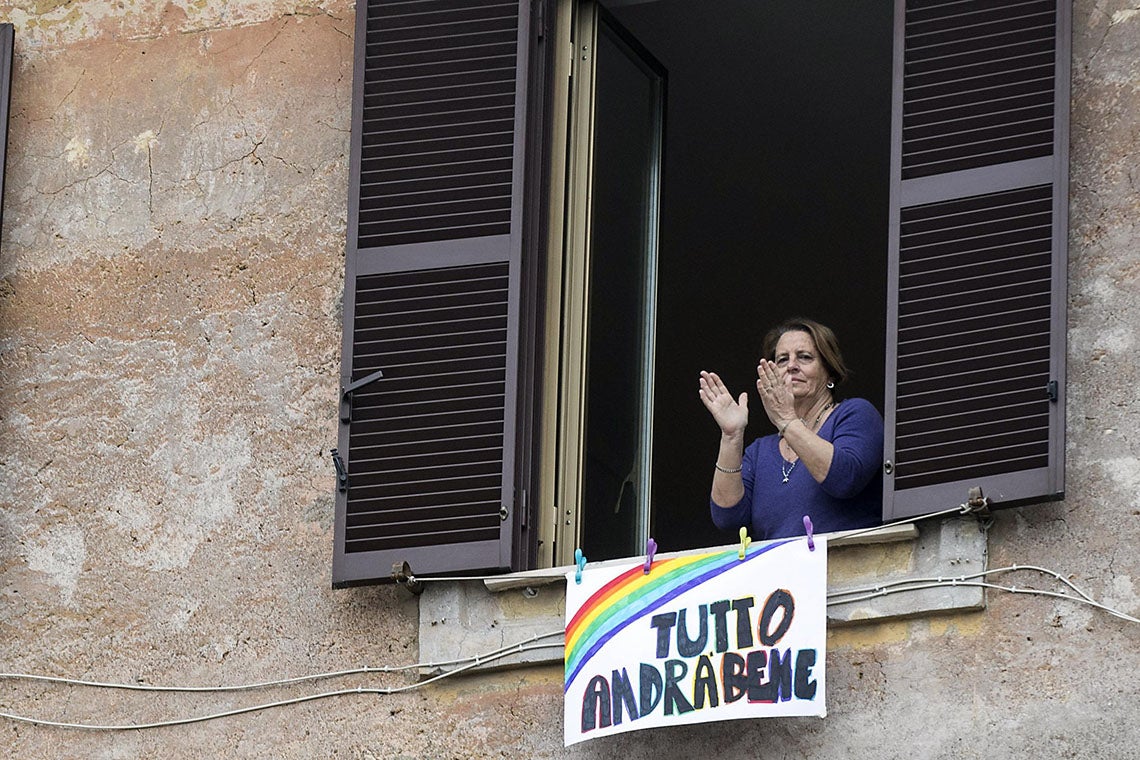 A woman claps above a banner reading “everything will be all right,” in Rome. This phrase has appeared on social media and at balconies and windows across Italy as the country faces coronavirus (photo by Roberto Monaldo/LaPresse via AP)

Medical researchers around the world are involved in an unprecedented collaboration to test experimental treatments for COVID-19. When Tedros Adhanom Ghebreyesus, the director-general of the World Health Organization (WHO), announced the initiative in mid-March, he called it the “solidarity trial.”

Across the globe, local expressions of solidarity appear to be spreading as individuals take it upon themselves to act on behalf of others in need.

From the WHO to government leaders and citizen actions, expressions of solidarity may appear to be a good and common-sense response to the crisis. Yet, as American author Barbara Ehrenreich suggests, fascists, religious zealots or nations at war also unite in solidarity to advance their agendas. Some groups can mobilize solidarity for destructive purposes.

While solidarity may be a fundamental human need, the meaning of solidarity and what it requires of us is elusive. In my work, I explore how realizing solidarity depends on education. Teaching for solidarity requires relationships, intentions and actions grounded in explicit ethical and political commitments. I am interested in how the values that underpin these commitments define the differences between “us” and “them.”

Whether we are confronting a pandemic, global warming, income inequality, racism or gender-based violence, solidarity depends on how we come together. It is defined by how we understand and enact our responsibilities to, and relationships with, each other.

Equally responsible for a debt

The word solidarity has its roots in the Roman law of obligation that held a group of people bound together – in solidum – as equally responsible for a debt. The contemporary uses of the concept go back to the French Revolution and the ideal of human solidarity articulated by philosopher and “champion of socialism,” Pierre Leroux.

For Leroux, solidarity was necessary for human well-being and flourishing. But in their 1848 Communist Manifesto, Karl Marx and Friedrich Engels conceptualized solidarity as an expression of the shared experience and specific political needs of the working class.

Solidarity has also been a central concept in Catholic social teachings since the end of the 19th century. It figures prominently in liberation theology, in which solidarity and communion with the poor is a fundamental spiritual commitment.

This brief history illustrates that solidarity depends on some idea of what it means to be “us.” In my forthcoming book, I explore the educational challenges that arise when people invoke solidarity in colonial societies.

German philosopher Kurt Bayertz points to four uses of the concept of solidarity.

The first, universalistic solidarity, suggests all human beings have a moral duty to work together for the benefit of all. This is implied whenever someone says “we’re all in this together.”

While compelling, this view of solidarity ignores differences and potential conflict between the needs and values of different groups. It overshadows how the impact of a crisis isn’t equal among different groups.

Lacking a personal sense of connection to and reciprocity with those who benefit from civic solidarity can undermine solidarity efforts, which may lead to the need for legal enforcement.

Bayertz’s third use, social solidarity, refers to how societies stick together, but also to how certain groups act together as a community to protect their interests.

But this is misleading. Trump’s right-wing conservative supporters don’t lack social solidarity. Rather, their sense of solidarity coheres around a commitment to ideals of freedom from restrictions and protecting their financial resources and investments as a way to ensure their own well-being.

Likewise, there is a strong sense of solidarity among conservative religious groups that rely on Christian faith over science to protect themselves.

A strong sense of social solidarity is crucial for advancing all kinds of political agendas and values.

Political solidarity revolves around issues of inequality related to class, racism, sexism and other forms of discrimination. Political solidarity usually involves one group acting in support of another, even though groups may not be affected equally by injustices.

Political solidarity raises questions about identification, privilege and reciprocity, as expressed, for example, through the hashtag #solidarityisforwhitewomen.

Yet the concept of political solidarity is crucial for addressing how pandemics exacerbate existing social inequalities. Ignoring this actually undermines other forms of solidarity.

Whatever form we invoke, it’s helpful to remember three aspects of solidarity:

Solidarity always requires us to be intentional about our commitments. What is the aim of our solidarity and where do those commitments come from?

Solidarity requires actions that also change us, perhaps even a sacrifice. What am I willing to do and give up in order to ensure the well-being of others, whether they are like or unlike me?

Toward creative forms of solidarity

Acknowledging the ethical and political commitments that we bring to solidarity is crucial. Otherwise, solidarity can “turn against us,” as Barbara Ehrenreich suggests.

For instance, some solutions, such as physical distancing, become impossible for communities that are already under-resourced, such as the homeless. Otherwise allied nations like Canada and the U.S. find themselves in conflict as both seek to ensure the supply of personal protective equipment for health-care workers.

Being explicit about ethical and political commitments will become increasingly important as governments ask us to compromise our personal freedoms and civil liberties to contain the spread of the virus.

Such compromises and the global character of the current crisis demand that we also think of solidarity as creative.

As the “crisis blows open the sense of what is possible,” in the words of journalist Naomi Klein, we are forced to imagine new ways of being with one another. We also have the opportunity to rethink our values and intentions, and to re-narrate the stories we tell about who we are, where we belong and with and to whom we share a debt.

Rubén Gaztambide-Fernández is professor of curriculum and pedagogy at the Ontario Institute for Studies in Education at the University of Toronto.