What does transportation equity mean? U of T researcher on why it’s too important to ignore 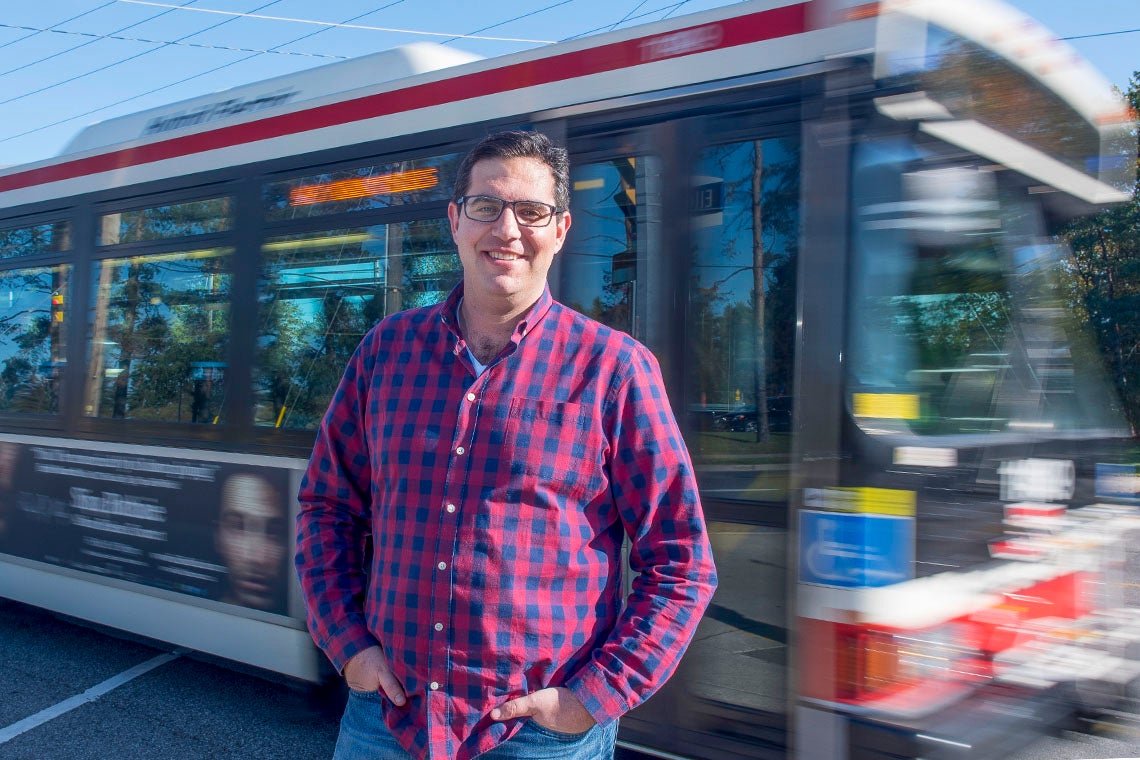 "What we’re trying to do is start the planning process with a clear idea of what inequalities exist in the [transportation] system." says U of T's Steven Farber (photo by Ken Jones)

Canada is on the cusp of some major disruptions to its transportation systems.

Ride-sharing apps, on-demand transit and micromobility (scooters, for example) are already available in some cities. Self-driving vehicles are in development. And as urban centres continue to grow, it is necessary to invest in traditional public transit that will best serve riders in the future.

But social benefits are often an afterthought in transit planning. When new technologies come into use, who gets left behind?

Steven Farber is an assistant professor in the department of human geography at the University of Toronto Scarborough. Much of his research looks at the social and economic outcomes of transportation use in urban areas. Farber is helping to host a two-day workshop this week called Mobilizing Justice that is bringing together industry, government, community stakeholders and academics to understand the role equity plays in planning transportation systems.

Farber recently sat down to talk about the role technology plays in creating and addressing inequities in transit systems, and why transit planning is a social justice issue.

What does transportation equity mean?

There’s no agreement yet on what it means exactly, but the general concept is looking at how to design transportation systems that are fair. This can be thought of as how transportation ‘goods’ and transportation ‘bads’ are distributed among different populations.

Transportation goods are things like ease of access to downtown via the subway, how frequent and affordable is the service, and to consider who has access to these good things – is it only the rich? Is it mostly white people? People of colour? In terms of transportation bads, it’s understanding who’s suffering from pollution, lack of access, safety issues or congestion.

Consider someone who is riding the bus because maybe they can’t afford a car. That person may be sitting in traffic caused by all these people driving around in single occupancy vehicles. How is that fair? So it’s also looking at how we can change the balance to improve the experiences of people who are making economic, environmentally and socially responsible decisions about transportation.

When we talk about transportation planning, it’s rarely thought of in terms of social justice. Why is that?

It’s a good question. Take the proposed Ontario Line [subway expansion] for example. The province conducted a full business case analysis based on ridership, costs, mode switching and congestion relief on the Yonge line, which are all good reasons, but the socio-economic impact was done very much after the fact. What we’re trying to do is start the planning process with a clear idea of what inequalities exist in the system. Do we have equity and fairness issues right now and, if so, what are the best transportation plans to remedy it?

A recent study you co-authored found that nearly one million Canadians live in transport poverty. What does that mean?

It’s pretty easy to define. It’s when being economically disadvantaged intersects with what’s called transport disadvantage. Generally speaking, this means a lack of reliable and frequent transit service, services that are too expensive or a lack of accessible transit, so it excludes people.

Some feel that technology has the power to level inequities, and that extends to transportation. What role do you think technology can play in addressing inequity in transportation systems?

At the moment it’s a mixed bag, and there seems to be two visions for the future. One is quite dystopian, with zombie autonomous cars driving across the city, more people taking cars because they can sit back and relax. More cars and more sprawl, causing more congestion. On the other hand, there’s these great things like apps that create better access to carpooling or give opportunities to people who live in poorly serviced transit neighbourhoods access to different forms of transit

There’s massive disruption taking place in the transit space due to technological changes. Things like ride hailing, autonomous vehicles, car-sharing apps, dockless micromobility such as scooters, bikes, and even on-demand transit systems. It’s important to look at the potential impacts of these disruptions and to have conversations about what are the opportunities to use technology for social good.

If certain technologies are only going to create greater inequity in transit systems, it could be equally important to look at how we can regulate them.