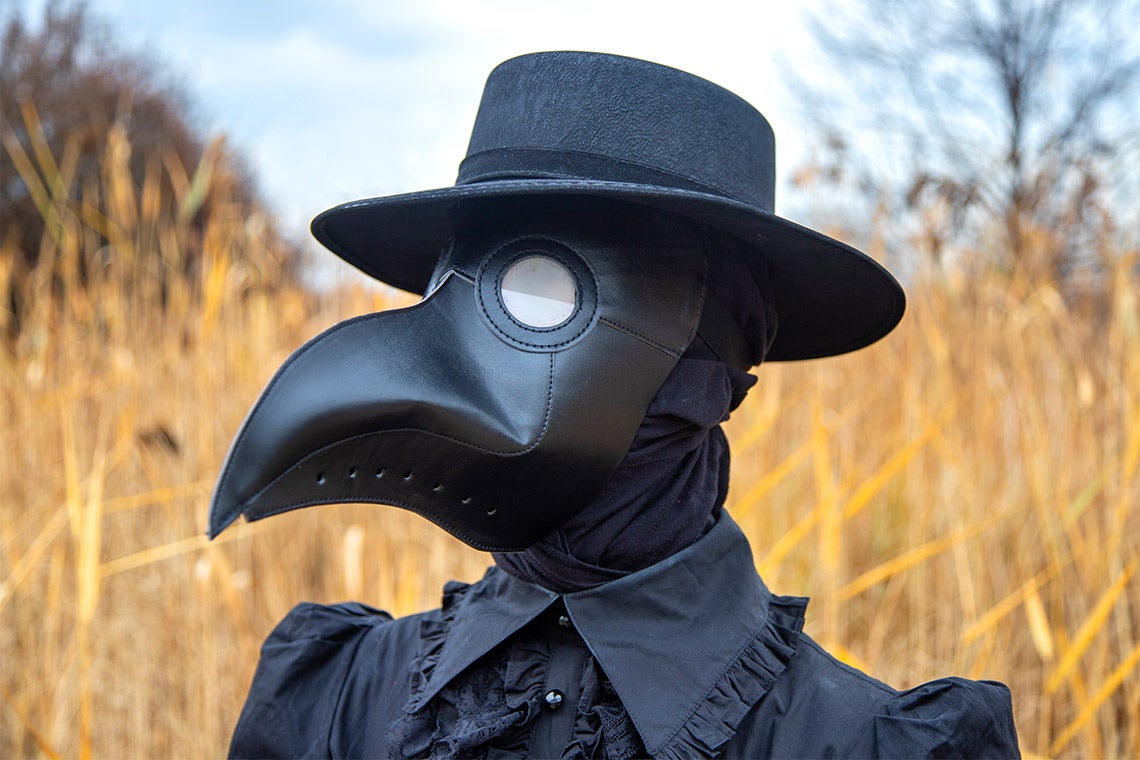 U of T anthropologist Madeleine Mant dresses as a plague doctor, complete with a bird-like leather mask, for her class on the 17th-century bubonic plague (photo by Drew Lesiuczok)

Anthropologist Madeleine Mant takes the concept of school dress codes to an entirely new level. Over the past semester, the University of Toronto Mississauga lecturer has shown up at class wearing vintage woolen capes, Victorian dresses and even black, bird-like leather plague mask.

Mant, who previously taught at U of T Mississauga in 2016, has returned to campus to teach three courses, including anthropology of infectious diseases, where she dons a new costume each week to spur discussion on health issues like the bubonic plague, tuberculosis, influenza, polio and HIV/AIDS.

“I want students to be interested in the topic, and the costumes make it easier to pull in a visual memory of what we talked about,” she says.

The courses are part of Anthropology of Health, a growing specialty within U of T Mississauga’s anthropology department that investigates how human biology relates to cultural and physical environments. Launched in 2015, the program prepares undergraduate students for careers in health research and gives future health scientists a solid grounding in anthropological techniques. 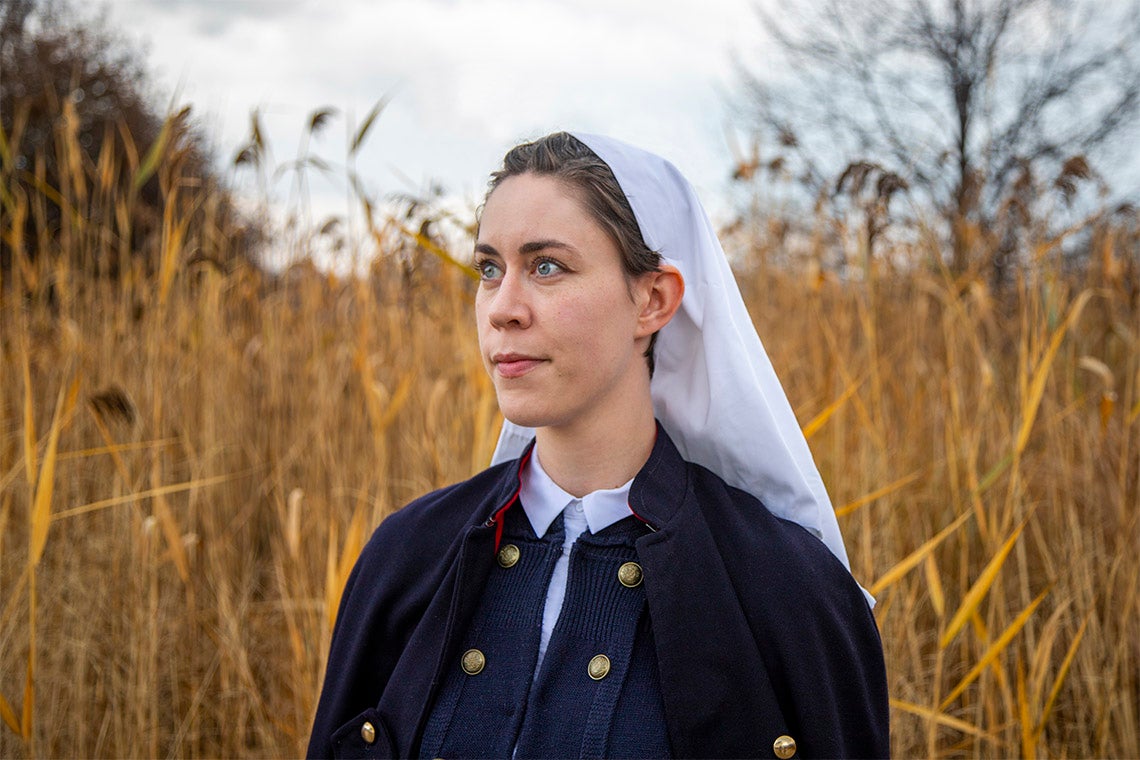 A self-described “theatre kid” who has performed in numerous plays, Mant says “wearing a costume makes students more willing to talk in class because no one looks sillier than me” (photo by Drew Lesiuczok)

“Very few universities have specialist programs within anthropology dedicated to the study of human health,” says Tracey Galloway, an assistant professor of anthropology at U of T Mississauga who studies health care and nutrition in the North.

“Anthropologists are uniquely trained to understand biology as the outcome of a wide range of influences – from epigenetics to environment to historical and socioeconomic factors – and to build that understanding through engagement with communities. We are quite excited to be able to offer these courses here, and we see them as the foundation for exciting opportunities for our students.”

A self-confessed “theatre kid,” Mant has always had a flair for the dramatic. During her graduate studies, she blew off steam with theatrical roles in Rent, Sweeney Todd and as Ms. Scarlet in Clue. Her resume also includes work as a historic interpreter at Fort Edmonton Park, a heritage park in Edmonton, Alta. where she has portrayed early settlers and a 1920s-era flapper.

“Every summer was spent playing dress-up and interpreting the lives of people who lived in the past,” Mant says. “The lesson I learned as an interpreter is that if you can engage with someone on a personal level, they will come away with a deeper understanding and context."

Now she uses that training in the classroom. For her lesson on the 1918-1919 influenza pandemic, Mant dresses as a war nurse, wearing authentic nursing uniform pieces that include a First World War uniform belt and a woolen cape. 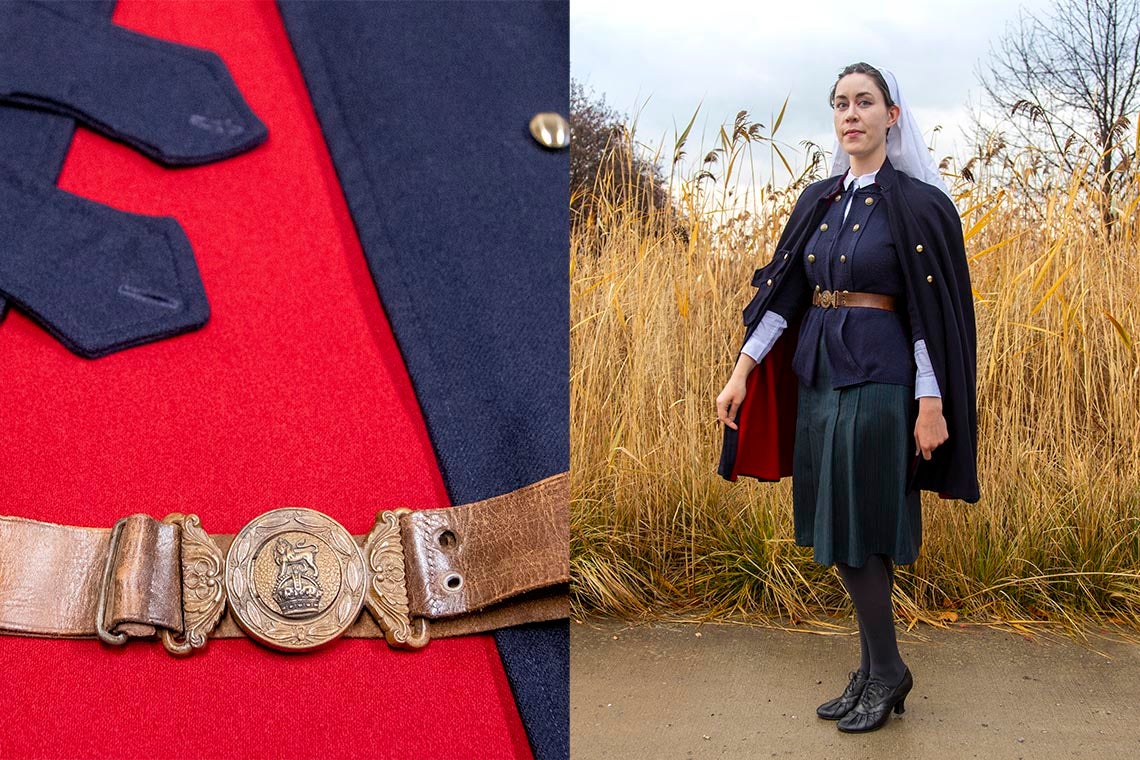 For her lesson on the 1918-1919 influenza pandemic, Mant  wears authentic nursing uniform pieces from the period, including a belt that formed part of a First World War uniform (photo by Drew Lesiuczok)

“Millions of people died in the outbreak. That’s too big a number to fathom … but when I tell the story of one particular person, such as a war nurse, who experienced this disease, it brings the lesson home in a tangible way,” she says. “The 1918 war nurse was really important. We have the names of these women and know how many of them went overseas, and how many died overseas. It's a chance to really focus on a single individual who was selflessly going to help this cause.”

Mant’s other classroom costumes are a combination of theatrical, vintage and new pieces. For her lesson on tuberculosis, she wears dresses from her role in Sweeney Todd, and adds a leather mask for the class on the 17th-century bubonic plague. Playing the part of a mother considering polio vaccinations for her child, Mant wears her grandmother’s 1950s wedding suit.

“It’s important for students to be able to look at some of these items and see that they hold a lot of history,” she says. “I find wearing a costume makes students more willing to talk in class because no one looks sillier than me.”

Trained as a bioarchaeologist and paleopathologist, Mant’s research seeks to understand health issues of marginalized people in the past, such as Victorian London’s working poor and 19th-century seafarers landing in Newfoundland ports.

“I look at human bones, with an eye on how disease is reflected in human remains,” she says. As a Banting Postdoctoral Fellow, Mant is currently delving into the historic health records of Her Majesty's Penitentiary, a Victorian-era prison still in operation in St. John’s, N.L. Her work will be on display at an upcoming exhibit about the prison hosted at The Rooms, Newfoundland and Labroador's cultural museum in St. John's.

Mant’s colleague Galloway lauds the lecturer for her theatrical approach in the classroom.

“You can’t help but be drawn into the story she is telling up there at the front of the room, through colour and sound and movement. Then, almost before you know it, you’ve learned some essential approach or idea that helps you understand the whole, and you’ve learned it in a way that you will remember all your life,” Galloway says.

“It’s not a stunt. It’s a purposeful strategy, carefully crafted and integrated into a comprehensive approach that supports student learning. Her performance creates a bridge between students and the knowledge that can change their lives.”