'We need a more comprehensive approach': U of T’s Robert Schwartz on the rise of vaping, risks and regulation 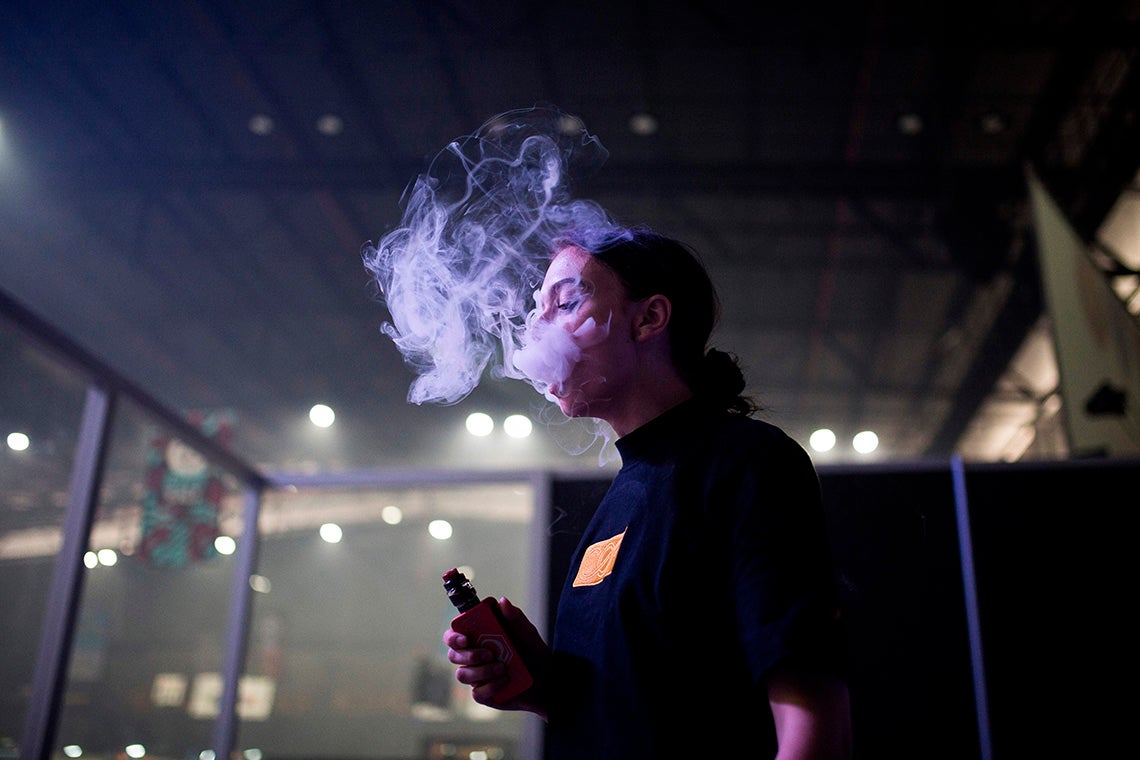 Scores of young people, many of whom have never smoked before, are using vaping devices despite physicians who have linked e-cigarette use to serious lung illnesses (photo by Guillem Sartorio/AFP via Getty Images)

The use of e-cigarettes, commonly known as vaping, is on the rise and is increasingly popular among young Canadians.

The growing trend is concerning to researchers like Robert Schwartz, a professor at the Institute of Health Policy, Management and Evaluation (IHPME) at the University of Toronto’s Dalla Lana School of Public Health.

He studies tobacco control and smoking cessation as executive director of the Ontario Tobacco Research Unit.

“Anyone who has never smoked cigarettes should not pick up vaping,” says Schwartz. “Our lungs are not designed to deal with inhaling aerosols or smoke and that includes the vapour in vape products.”

Yet, scores of young people, many of whom have never smoked before, are using vaping devices. At the same time, physicians in the United States have linked e-cigarette use to a serious lung illness, throwing vaping and its regulation here in Canada into the spotlight.

Schwartz recently spoke with IHPME’s Rebecca Biason about the risks of vaping and prevention strategies, including the province’s recent advertising restriction on vaping products in convenience stores. 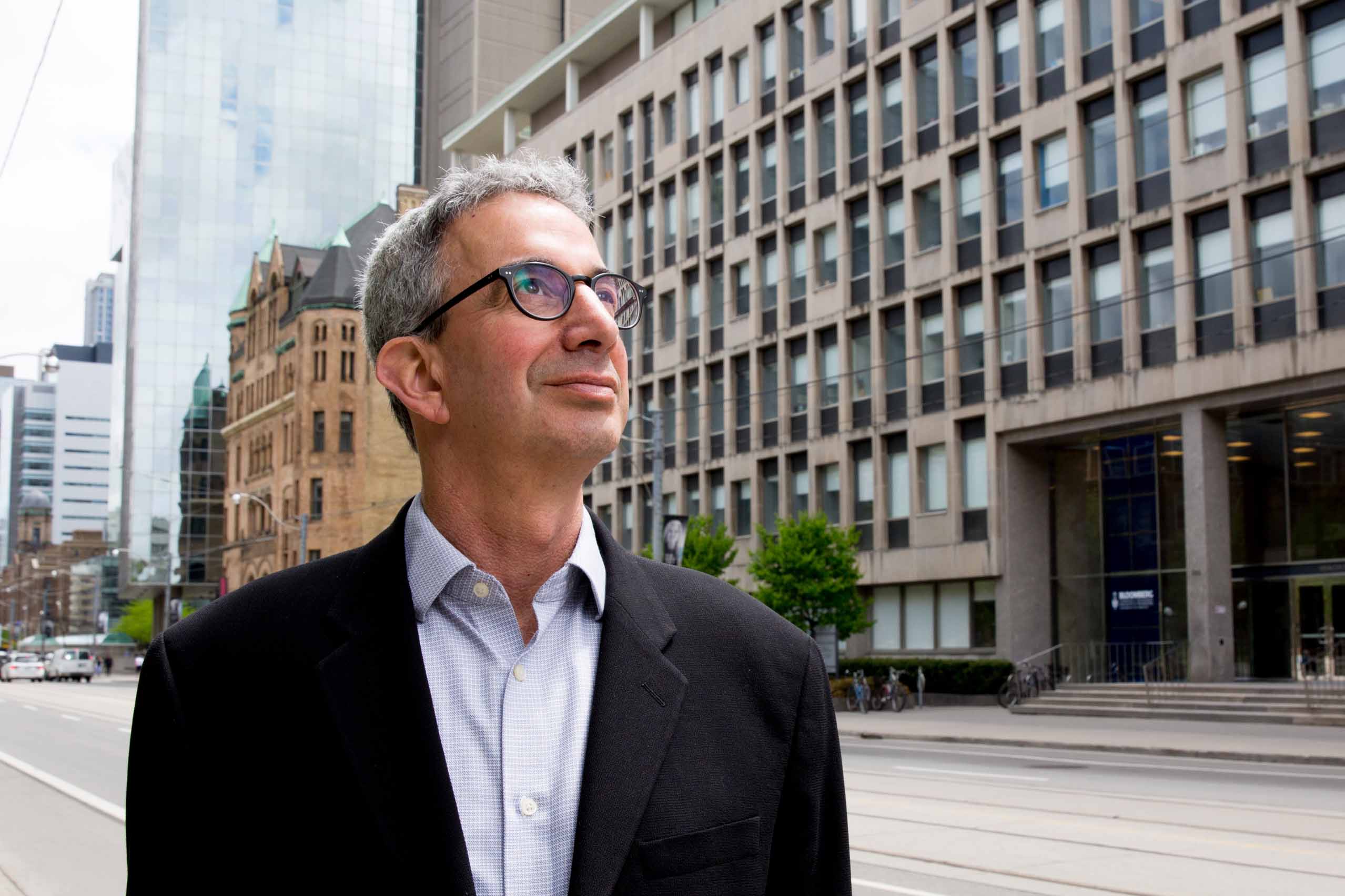 Robert Schwartz, a professor at U of T’s Institute of Health Policy, Management and Evaluation (IHPME) at the University of Toronto’s Dalla Lana School of Public Health, says advertising is playing a significant role in exposing youth to vaping products (photo courtesy of IHPME​)

What are the risks of vaping, and why do you think it has become such a trend?

It is cool to vape. It looks cool to blow clouds and the vaping devices look trendy.  But what people should remember is that the nicotine which is in the vaping products remains highly addictive.

Advertising also plays a significant role in youth exposure to vaping products. The Ontario Tobacco Research Unit recently conducted a study that found almost all youth, aged 16 to 24, who were surveyed had been exposed to advertisements of vaping products – either through social media or within convenience stores.

And we know that advertising works. We don’t need more studies to prove that.

Some individuals may not think that inhaling e-cigarette vapour is dangerous as they think that it is just water vapour. But that lack of understanding of what is inhaled – including small particulate matter, vegetable glycerin, propylene glycol, flavouring agents and nicotine – can lead consumers to believe it is better for them or not as harmful.

A recent systematic review shows that we don’t even yet know if vaping is less risky than smoking in regards to respiratory disease, and there is evidence to suggest that long-term use of e-cigarettes leads to chronic diseases. Among young people, we are finding that rates of coughing and wheezing are higher among those who vape versus those who don’t, and that’s another indicator for respiratory illness and other conditions down the line, including chronic obstructive pulmonary disorder.

Have we done enough to prevent young people from taking up vaping?

No, I don’t think we have. Allowing advertising in the first place has been a big mistake on the part of our government. They likely did allow unregulated advertising because they thought smokers might be encouraged to stop smoking and vape instead.

But the ads we’ve all seen plastered around train stations, on bus shelters or elsewhere do not just target current smokers. They are appealing to young people.

Vaping flavours are a completely different issue. There are thousands of flavours from cotton candy to crème brûlée – all of which are popular with youth who are vaping. While there are calls to ban certain flavours, we need to be careful not to just ban all flavours because there are still adults using them who vape to quit smoking.

How might the recent push for advertising bans make a difference?

The recent advertising restrictions are provincial and apply only to advertising in convenience stores. This is because convenience stores selling e-cigarettes are the only places where the province believes they have jurisdiction to impose such a ban. However, Quebec has banned ads for e-cigarettes everywhere, so it is certainly possible for the province to go further.

There are currently more restrictions on cannabis advertising than on e-cigarettes and that has to change. There is also a tendency to use a harm reduction approach when making decisions on advertising restrictions. For example, assuming cigarettes are more harmful then e-cigarettes makes it okay to advertise one versus the other – and I just don’t buy that. It would make much more sense to put an insert into the packets of cigarette cartons or – even better – coupons for e-cigarettes if the goal is really to target and convert smokers only.

Right now, it is hard to see that advertising bans will have a major effect. The train has already left the station. But we need a more comprehensive approach. This would include banning all ads, promoting restrictions on nicotine concentration and flavours along with public education on the risks of vaping and an increase in price to [discourage] the youth market.

We can’t lose focus on the need to curb cigarette smoking. In 2019, it is still an issue that one in five Canadians continues to use tobacco.