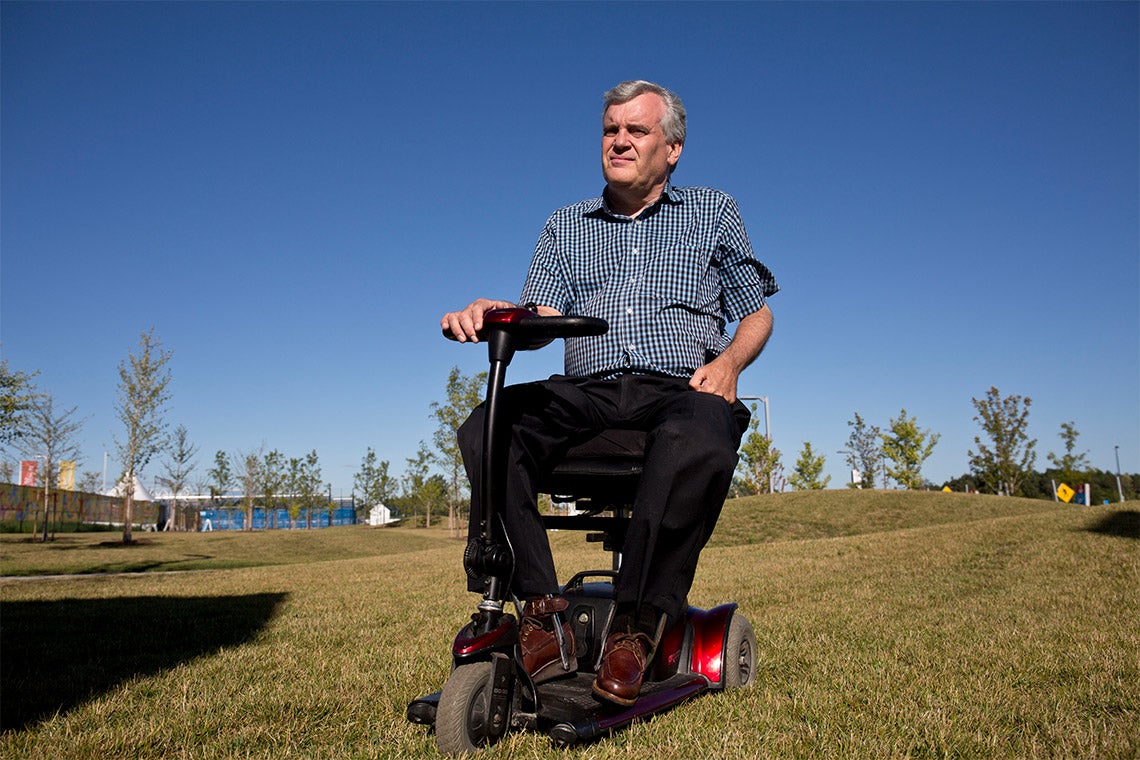 David Onley, a former lieutenant governor of Ontario and distinguished lecturer at U of T Scarborough, has long been a passionate advocate for disability rights (photo by Lucas Oleniuk/Toronto Star via Getty Images)

David Onley is calling on Canadians to embrace a more inclusive, accessible society as they begin the task of rebuilding following COVID-19.

“When I hear talk of recovering Canada’s economy and future prosperity, I believe we shouldn’t have to settle for a ‘new normal,’” says Onley, who recently addressed the House of Commons Standing Committee on Human Resources, Skills and Social Development and the Status of Persons with Disabilities.

“Instead, we should develop a new, improved and accessible normal, one that embraces the Accessible Canada Act – not as a burden, but one that benefits Canadians of all abilities.”

Onley, who served as Ontario’s Lieutenant Governor from 2007 until 2014, has always been a passionate advocate for disability rights. He says that according to StatsCan data, persons with disabilities make up 22 per cent of the Canadian population, yet the vast majority still face significant barriers to inclusion.

As an example, he points to the design of public washrooms, with some still requiring opening two doors, and others that require users to physically push a button in order to open the door.

“Doors remain a huge barrier, especially during a pandemic when people are wary of touching surfaces,” says Onley, a U of T Scarborough alumnus and a senior lecturer and distinguished visitor in the department of political science.

“We have the technology. Things like touchless sensors or layouts that remove the need for a physical door in the first place are so simple, yet so empowering.”

In addition to countless physical barriers, Onley says attitudes are often shaped by ableism, which he defines as the “benign neglect” of persons with disabilities.

“We tend to glorify youth and value a certain definition of physical beauty at the expense of those who don’t fit that definition,” says Onley, who received the Order of Canada in 2016.

“Value judgements then get made about what a person is capable of achieving based on how they appear, and this ends up shaping our notion of who is valued and who isn’t in our society.”

The crushingly high unemployment rate for persons with disabilities is one byproduct of ableism, says Onley. While one of the key recommendations from his review of the Accessibility for Ontarians with Disabilities Act (AODA) in 2019 was to improve access to employment opportunities, he says much work remains to be done.

He adds that ableism is likely also responsible for many of the deaths suffered at seniors’ and long-term care homes during the pandemic.

“Two groups in particular – those requiring daily assistance from [personal support workers], as well as seniors and younger adults with mobility issues residing in seniors or long-term care homes – have been especially affected during the pandemic,” says Onley, who teaches a course on the politics of disability at U of T Scarborough.

“There’s a monumental task ahead of us in rebuilding after the pandemic, but I’m hopeful meaningful change will happen. If we want to build a healthier, more prosperous society, it should go without saying that it needs to be a more accessible, inclusive society as well.”