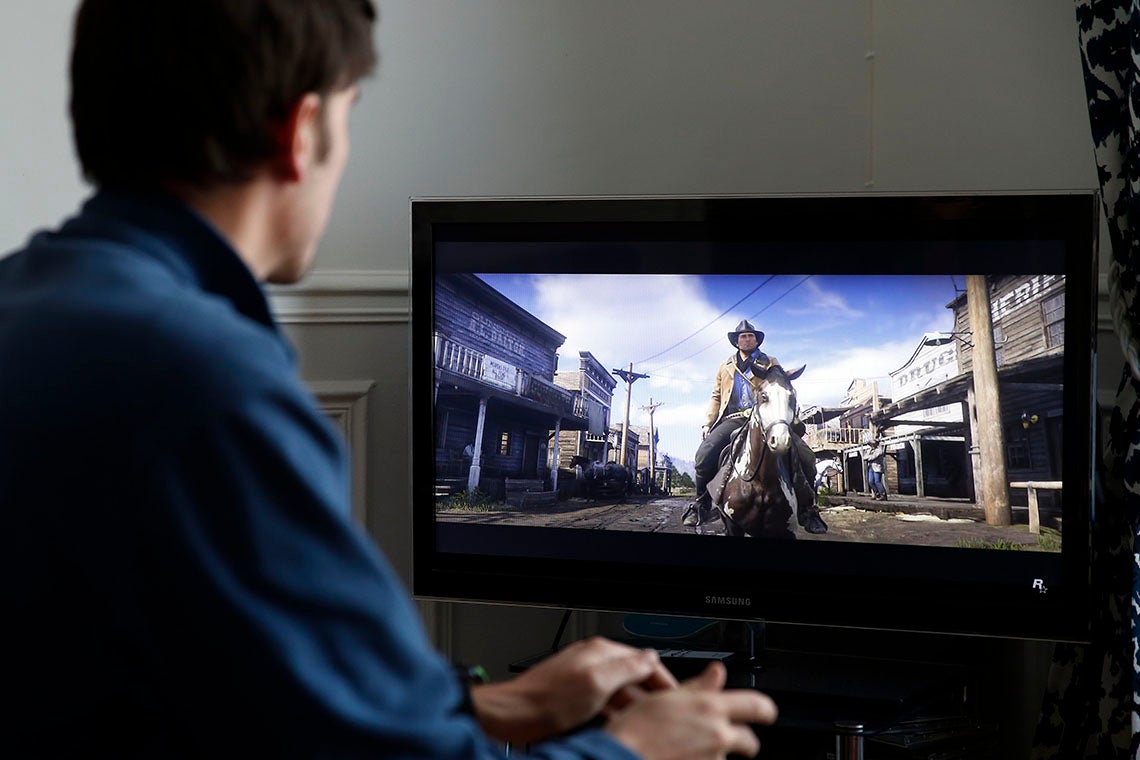 In this photo illustration a gamer plays the video game “Red Dead Redemption 2,” which raked in US$725 million in sales during the first three days following its launch (photo by Chesnot/Getty Images)

On Fridays around 3 p.m., when many University of Toronto Mississauga students are daydreaming about the weekend, Siobhan O’Flynn can look around her classroom and see almost a full house of unusually attentive undergraduates.

O’Flynn, an assistant professor, teaching stream, leads an English course called “Video Games”, and she’s working with a generation whose lives are steeped in digital media.

“With the uptake of social media, there’s a massive online community playing games and, with smartphones nearly ubiquitous, the number of mobile games players is growing,” says O’Flynn.

Her students do play games as part of the course syllabus, but the class goes far beyond gaming for pure pleasure. Students explore the narrative structure of games in terms of plot, characters, design and how games differ from novels; they learn about the evolution of games, the existing genres and various gaming platforms. They also consider the gaming experience and they explore the emergence of game studies as a critical practice. The students top it all off by creating their own story-based games.

“Students learn about mental models and experience design, which are key in game design,” says O’Flynn. “They learn how play-testing, game mechanics and user-experience design mesh with literary analysis so they can design really awesome games.

“How you play a game and what you see is much more variable than what happens in a literary text.”

Alexis Cochrane, a fourth-year double major in English and communication, culture and information technology, says she has become critical of video games since taking the course. “The course has taught me to consider video games as both a designer and as a literary scholar,” she says.

As with literature, there can be a contrast between the creation itself and its messages or experiences. The video game design can be gorgeous and full of stunning images, but the story can lead the player through war and destruction.

“They can be beautiful esthetically, but gory and violent things can happen. Games are systems designed to make us feel things.”

The course also addresses the evolution of video games.

“We look at arcade games and early computer games and see the continuing increase in processing power,” says O’Flynn. “Today’s games are much more complex and visually stunning.”

O’Flynn also teaches students about the gaming industry and she ensures that they understand how games are designed to addict players.

“Games generate more revenue than films or literary texts,” she says. “Students need digital literacy skills to understand how the creators do what they do and how it affects us. This opens up a whole different layer of critical inquiry because other media aren’t designed in the same way to get us to do things.

“It’s very important to have this understanding because children are playing games starting at a very young age.”

O’Flynn adds that students' affinity for video games means “They love to get into discussions that analyze various games and they enjoy creating and testing each other’s creations and offering suggestions.”

Cochrane agrees. She says being taught how to make game was “transformative” for a writer like herself who wasn't familiar with video game design before taking the course.

“Professor O’Flynn taught us how to be critical of games as literature and then recreate these aspects into our own games,” she says. “It gave students the ability to take our new-found understanding and knowledge of the games and create our own.

“It is an essential hands-on portion of the course that offers a new layer of contextual understanding.”

Thanks to courses such as this, game designers will need to prepare for a new group of consumers who are critical, sophisticated and demand high quality from their gaming experience and for scholars who will be analyzing their output on many levels.

“As our ability to create evolves, so should the way we study and understand those creations” Cochrane says.