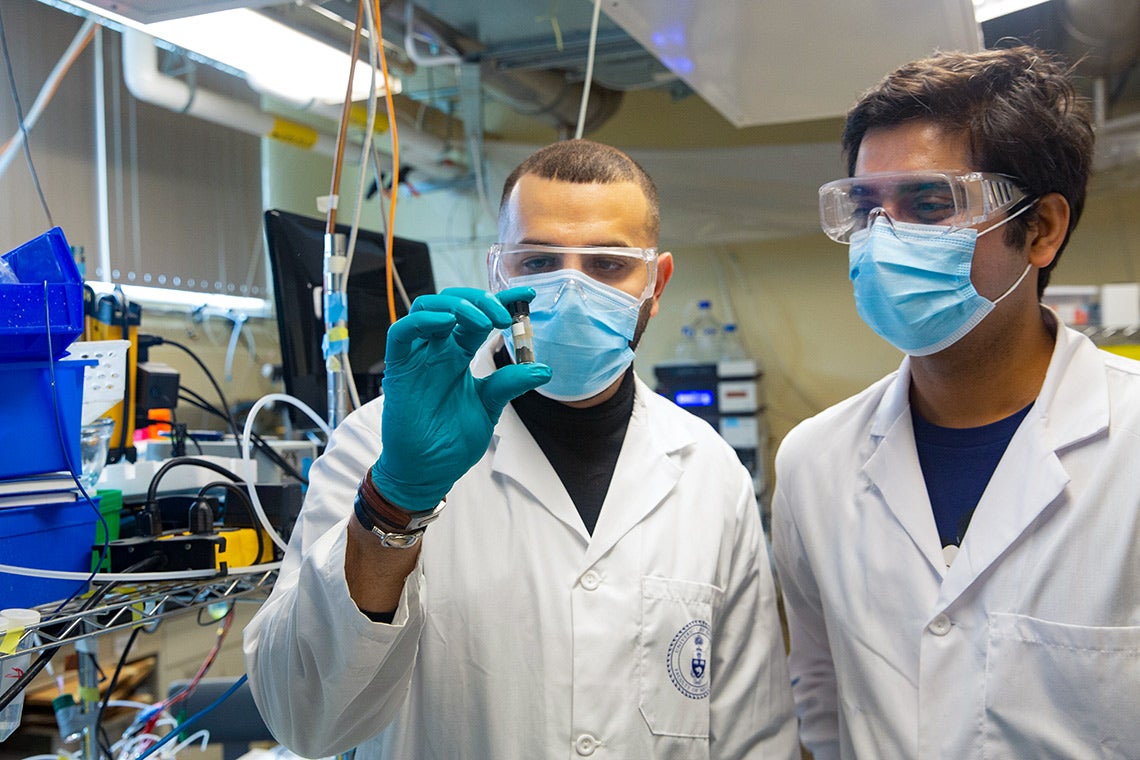 U of T Engineering PhD candidates Jehad Abed (left) and Hitarth Choubisa with a vial of the newly synthesized catalyst for hydrogen production, which was discovered with the help of a new quantum-inspired computing technique (photo by Tyler Irving)

Researchers from the University of Toronto's Faculty of Applied Science & Engineering and Fujitsu have developed a new way of searching through ‘chemical space’ for materials with desirable properties.

The technique has resulted in a promising new catalyst material that could help lower the cost of producing clean hydrogen.

The discovery represents an important step toward more sustainable ways of storing energy, including from renewable but intermittent sources, such as solar and wind power.

“Scaling up the production of what we call green hydrogen is a priority for researchers around the world because it offers a carbon-free way to store electricity from any source,” says Ted Sargent, a professor in the Edward S. Rogers Sr. department of electrical and computer engineering and senior author on a new paper published in Matter.

“This work provides proof-of-concept for a new approach to overcoming one of the key remaining challenges, which is the lack of highly active catalyst materials to speed up the critical reactions.”

Today, nearly all commercial hydrogen is produced from natural gas. The process produces carbon dioxide as a byproduct: if the CO2 is vented to the atmosphere, the product is known as ‘grey hydrogen,’ but if the CO2 is captured and stored, it is called ‘blue hydrogen.’

By contrast, ‘green hydrogen’ is a carbon-free method that uses a device known as an electrolyzer to split water into hydrogen and oxygen gas. The hydrogen can later be burned or reacted in a fuel cell to regenerate the electricity. However, the low efficiency of available electrolyzers means that most of the energy in the water-splitting step is wasted as heat, rather than being captured in the hydrogen. 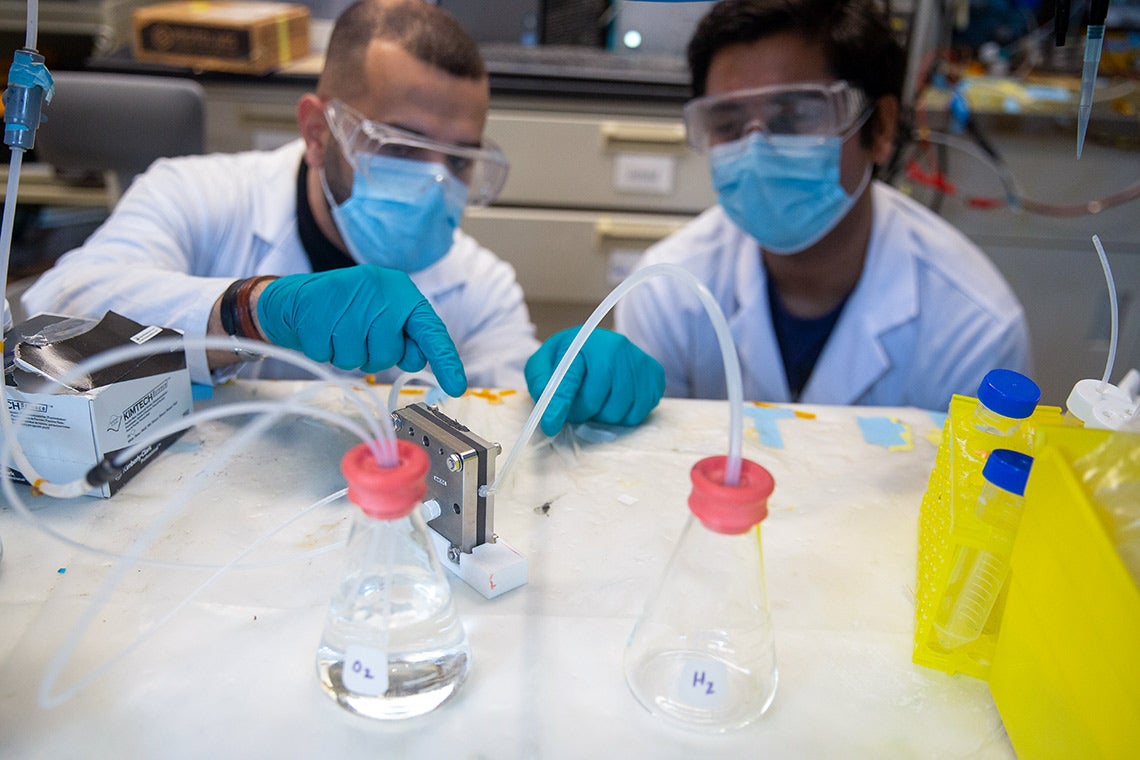 U of T Engineering PhD candidates Jehad Abed (left) and Hitarth Choubisa with an electrolyzer capable of splitting water into hydrogen and oxygen gas. The newly discovered catalyst could increase the efficiency of this reaction (photo by Tyler Irving)

Researchers around the world are racing to find better catalyst materials that can improve this efficiency. But because each potential catalyst material can be made of several different chemical elements, combined in a variety of ways, the number of possible permutations quickly becomes overwhelming.

“One way to do it is by human intuition, by researching what materials other groups have made and trying something similar, but that’s pretty slow,” says department of materials science and engineering PhD candidate Jehad Abed, one of two co-lead authors on the new paper.

“Another way is to use a computer model to simulate the chemical properties of all the potential materials we might try, starting from first principles. But in this case, the calculations get really complex, and the computational power needed to run the model becomes enormous.”

To find a way through, the team turned to the emerging field of quantum-inspired computing. They made use of the Digital Annealer, a tool that was created as the result of a long-standing collaboration between U of T Engineering and Fujitsu Research. This collaboration has also resulted in the creation of the Fujitsu Co-Creation Research Laboratory at the University of Toronto.

“These problems include finding the most efficient route between multiple locations across a transportation network, or selecting a set of stocks to make up a balanced portfolio. Searching through different combinations of chemical elements to a find a catalyst with desired properties is another example, and it was a perfect challenge for our Digital Annealer to address.”

In the paper, the researchers used a technique called cluster expansion to analyze a truly enormous number of potential catalyst material designs – they estimate the total as a number on the order of hundreds of quadrillions. For perspective, one quadrillion is approximately the number of seconds that would pass by in 32 million years.

The results pointed toward a promising family of materials composed of ruthenium, chromium, manganese, antimony and oxygen, which had not been previously explored by other research groups.

The team synthesized several of these compounds and found that the best of them demonstrated a mass activity –  a measure of the number of reactions that can be catalyzed per mass of the catalyst – that was approximately eight times higher than some of the best catalysts currently available.

The new catalyst has other advantages too: it operates well in acidic conditions, which is a requirement of state-of-the-art electrolyzer designs. Currently, these electrolyzers depend on catalysts made largely of iridium, which is a rare element that is costly to obtain. In comparison, ruthenium, the main component of the new catalyst, is more abundant and has a lower market price.

There is more work ahead for the team: for example, they aim to further optimize the stability of the new catalyst before it can be tested in an electrolyzer. Still, the latest work serves as a demonstration of the effectiveness of the new approach to searching chemical space.

“I think what’s exciting about this project is that it shows how you can solve really complex and important problems by combining expertise from different fields,” says electrical and computer engineering PhD candidate Hitarth Choubisa, the other co-lead author of the paper.