#UofTGrad17: Computer whiz is U of T's top student 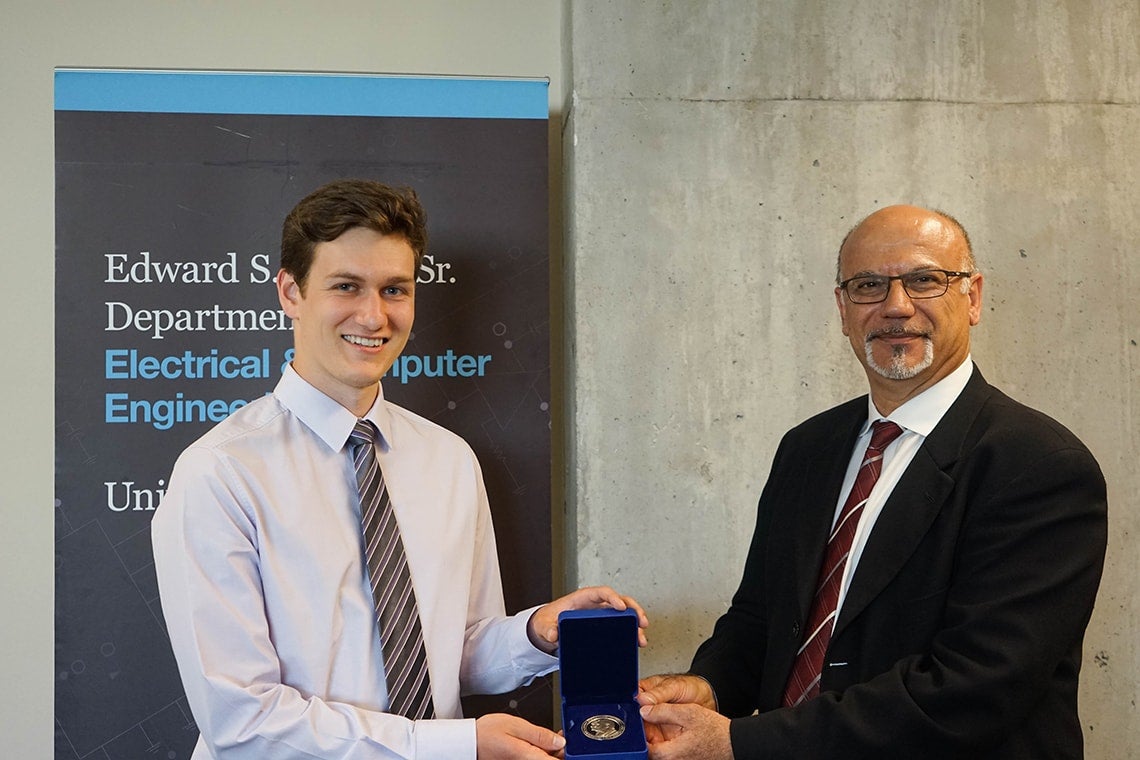 Sandro Young receives a Governor General’s Silver Medal in recognition of his high academic achievement by Farid Najm, chair of electrical & computer engineering at U of T (photo by Laura Brown)

Sandro Young will join Google at its Mountain View, Calif., headquarters in September

Sandro Young has always been interested in computers, circuits and electronics.

What started as a middle-school passion – Young was an active participant in science fairs in Grades 7 and 8 – eventually led him to study in The Edward S. Rogers Sr. Department of Electrical & Computer Engineering (ECE) at U of T where today, he graduates as the university's top student.

“I never set out to be the top graduating student,” says Young. “But I’ve pretty much always been interested in science, math and technology – especially programming, software and computer architecture so ECE was a great fit for me. I enjoyed all of the courses and projects along the way.”

Young graduates with a number of scholarships, awards and medals in recognition of his academic achievements, including one of three Governor General’s Silver Medals bestowed to U of T’s most academically outstanding undergraduate students graduating this spring. He is also the recipient of the John Black Aird Scholarship, given to the top student at U of T.

In September, Young will join Google at its Mountain View, Calif., headquarters.

Top marks weren’t Young’s only focus during his undergraduate experience: he was a member of several clubs, including the SPARK Design Club, where he was co-president.

“The Spark club builds interactive electro-mechanical displays three or four times a year and puts them around campus for people to play with and interact with,” says Young. “What was really great was that students across all disciplines would work on these projects so everyone was learning from each other – it’s a very high-energy and collaborative environment.”

Young followed his academic interests as he chose his courses in upper years – he took computer architecture, computer vision and classes on machine learning and natural language understanding.

Open-ended design projects completed throughout his courses were challenging but a great undergraduate experience, he says.

“The capstone project in fourth year and the final project in the second-year digital logic course were a lot of fun,” says Young.

“One of the things I really love about engineering is the fact that there is a lot of creativity involved, getting to take some of the concepts we learned and applying them to open-ended problems was one of my favourite things about studying here.”

“The awards and scholarships Sandro has received represent not only his academic ability, but his perseverance, commitment and enthusiasm,” says Professor Farid Najm, chair of ECE. “These qualities will serve him well as he embarks on the next stage of his engineering career – and I look forward to following his continued success.”

At the end of his second year, Young completed his Professional Experience Year at Altera, an Intel-owned American manufacturer of programmable logic devices. He will join Google, after spending two summers working with the company on its Machine Perception and Ads Quality teams.

“I’m really interested in machine learning because I think it has the potential to revolutionize the way we interact with technology and the role technologies plays in our daily lives and in society,” says Young. “I’m still going through the team-matching process at Google, but I’d love to land on a team doing work in that area.”

As for advice to current and future students, Young’s outlook is both philosophical and practical: “I think it’s helpful to keep an open mind about all of the courses you are taking, even if it’s not your favourite subject. If you find ways to make it relevant to you, you can be more engaged,” says Young. “And if you go to class regularly, then you are forced to think about the subject for at least a few hours a week – I mostly took my own advice on that!”