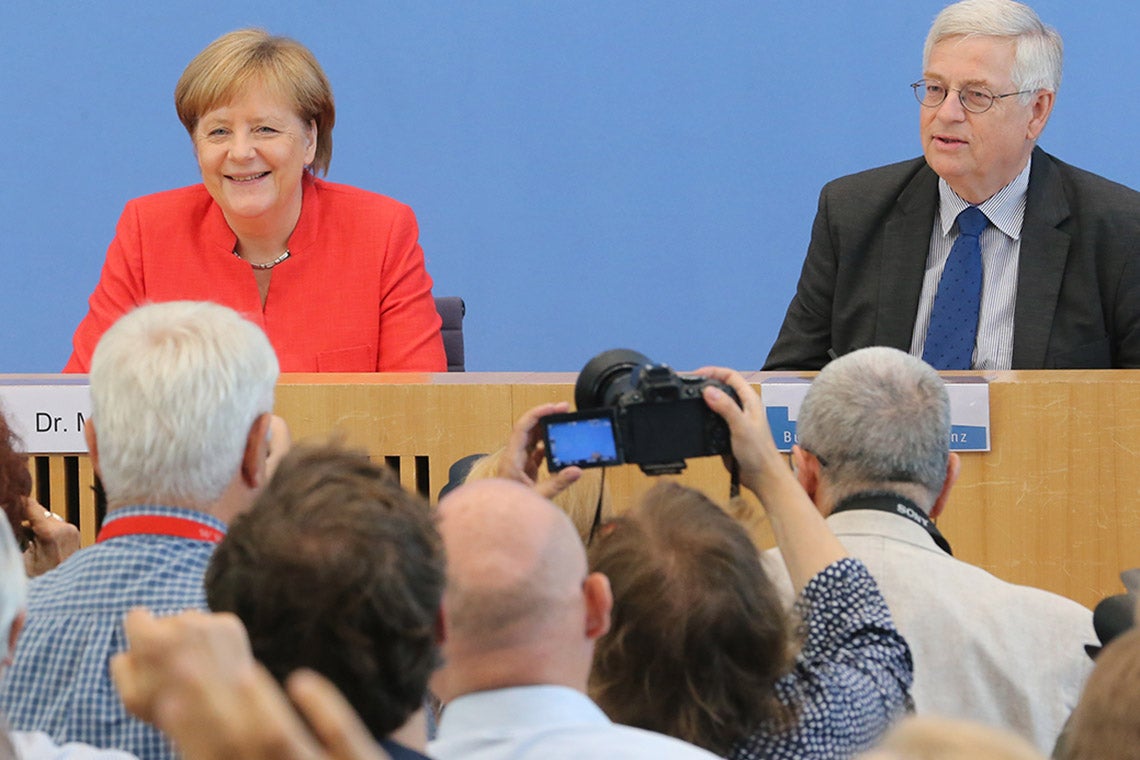 German Chancellor Angela Merkel attends a Bundespressekonferenz in July of 2018, with Gregor Mayntz (right). Mayntz will be taking part in a media symposium at Massy College on Wednesday

Journalism in Canada and around the globe is under siege as attacks on journalistic integrity abound. What is the best way to improve the public trust in journalism, and at the same time strengthen the foundations of democracy?

That question will be front and centre at an April 24 media symposium co-hosted by the German Consulate General in Toronto, Massey College and University of Toronto Communications. “(Un) Truth – Journalism and Democracy in the Digital Age” will examine journalism from European and North American perspectives, looking at the media’s role in promoting democracy through the presentation of facts.

The sessions will be moderated by Jeffrey Dvorkin, director of the journalism program at U of T Scarborough, and will include German and Canadian panelists including Globe and Mail columnist Elizabeth Renzetti, Toronto Star Public Editor Kathy English, German journalist and author Ursula Weidenfeld, and Peter Loewen, a professor in the department of political science and the Munk School of Global Affairs & Public Policy. Ron Diebert, director of Citizen Lab at the Munk School, will be delivering the final keynote on targeted espionage.

Another keynote speaker will be journalist Gregor Mayntz, chairman of the unique German institution, the Federal Press Conference (Bundespressekonferenz). The BPK, created just after the Second World War and run by journalists, convenes three press conferences a week to which politicians, bureaucrats and other leaders are invited. The BPK is a powerful institution, and politicians ignore it at their peril. Because of it, the levers of political communication are in the hands of journalists, not the politicians.

Mayntz spoke to U of T News in advance of his presentation to the symposium, which will take place at Massey College on Wednesday.

How does the Federal Press Conference format help maintain the quality of news coverage, compared to what happens in North America?

When you look at the White House, where the President can decide not to invite some journalist [to attend], we see the advantage of the Federal Press Conference. We fix the rules, we host, and the politicians are our guests. Our rules are very simple: Every member can ask any question.

Do politicians feel compelled to show up and participate?

They are not forced to come. But the reputation of a politician depends on his or her attitude, and how clever they are when confronted with our questions, outside of the protected space within the ministry.

So it helps them if they perform well in this environment?

I think so. And in the past we have seen the opposite, when someone came and didn’t answer the questions very well, and then they lost their job. This has happened once or twice over the years.

In North America, some politicians are trying to go around the traditional press, and communicate with constituents directly through Twitter, Facebook or other means. Is that an issue in Germany?

Yes, we see this trend in Germany as well. Every politician thinks it is better to communicate directly with the public. But if you see the number of viewers on their own Facebook pages, it is sometimes just 20, or 200. It’s not nearly as big an audience as the politician can get if they come to the Federal Press Conference. We have 900 participants – almost all newspapers and broadcasters are members.

How does the Federal Press Conference handle bloggers, web outlets and other new media?

We have some members who are bloggers. Our requirements for membership say you have to make a living from your profession, and you have to cover foreign policy. If you can fulfil these requirements, you can be a member.

Are there any restrictions on how members handle the material from the press conferences?

In asking questions, is priority given to traditional media?

No. Every member has the same right as the others. Whoever puts their hand up first will get the first question.  Sometimes, before we start the press conference, we ask which themes and topics are of interest to more than one member. Then those will be discussed first. But the principle is that every member can ask any question. We also work with the foreign press association, so if you are a correspondent from a Canadian newspaper, and you become a member of the foreign press association, you can attend the conference and ask any question you want.

Does this format help strengthen trust in the media, and guard against accusations of “fake news”?

Yes, it may help. You can ask questions over and over again, and the politicians who are our guests have the chance to give answers that give the whole picture in some circumstances.

Would this kind of format work in North America?

What can journalists do to fight against accusations of fake news?

The only solution is to do the job as we have done it for decades: to report what you know to be the truth.

Is a robust media environment crucial to any Western democracy?

I am deeply convinced that a functioning democracy doesn‘t happen by itself – and won‘t stay in place by itself.  You have to pay attention to essential preconditions, and among these a free, robust and responsible media is not the least important one.

This interview has been condensed and edited.