Understanding the spread of COVID-19 through physics-based modeling 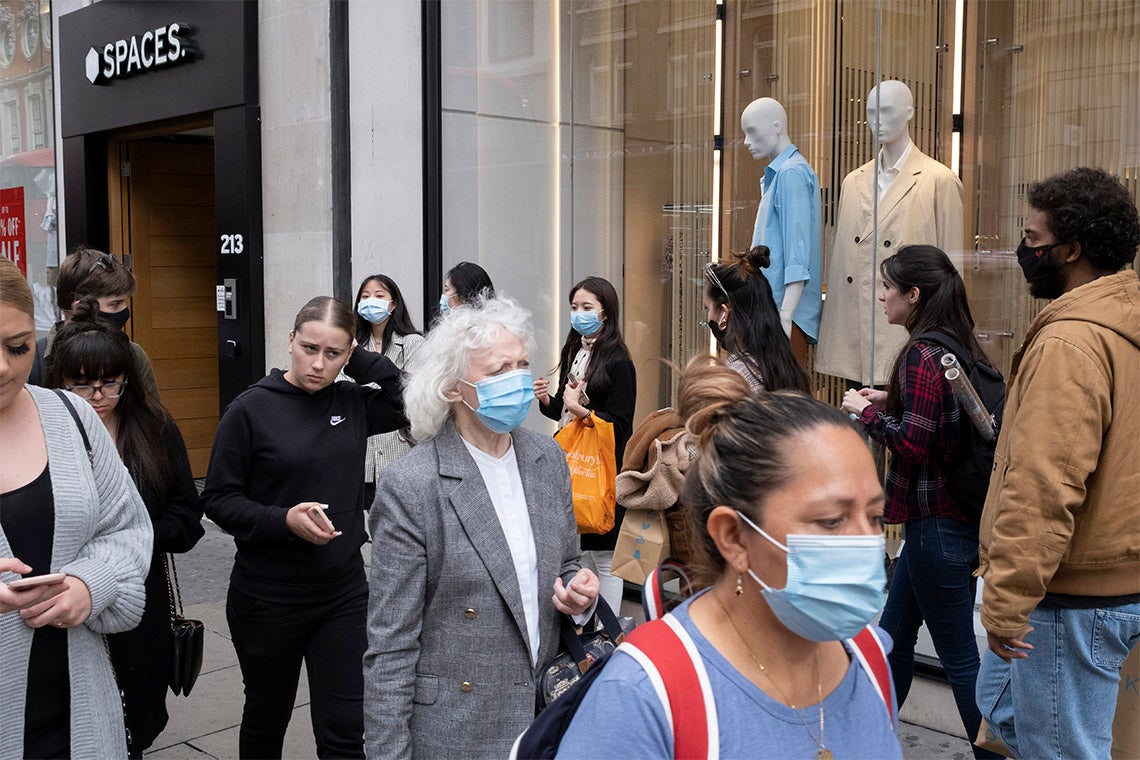 Shoppers on Oxford Street in London, England, where masks will be required inside stores beginning July 24 (photo by Mike Kemp/In PIctures via Getty Images)

Professor Swetaprovo Chaudhuri of the University of Toronto Institute of Aerospace Studies (UTIAS) normally spends his time thinking about the motion of fluids through jet engines.

Now, that expertise is being used to understand the spread of COVID-19.

“In aircraft engines, fuel is injected into the combustor in a fine spray of droplets with sizes somewhat similar to what is ejected while coughing or sneezing,” he says. “While the specific conditions of a respiratory spray are different, the same fundamental physics are involved.”

Back in March, as the pandemic ramped up across Canada and other nations, Chaudhuri called up some long-time collaborators: Professor Abhishek Saha at the University of California San Diego, and Professor Saptarshi Basu of the Indian Institute of Science.

Together, they started to consider what it would take to adapt the physics-based models traditionally used for their work in combustion to instead describe the processes involved in transmitting the new virus.

“The way we see it, physics is involved in at least three levels,” says Chaudhuri. “The first is at the scale of a droplet: how they form and evaporate. The second is at the scale of the spray: the size distribution and trajectories of droplets within a sneeze or cough.”

“The third is the interaction among people. As a first step, we can model interactions between people the same way we model collisions between molecules in a chemical reaction,” he says.

The team believes their model is the first to explicitly connect the respiratory droplet cloud aerodynamics and evaporation physics to the equations that describe the spread of disease in a human population.

To validate the model, the researchers conducted experiments in an acoustic levitator, a device that uses sound waves to cause droplets of saline solution to float suspended in air. The team measured how these suspended droplets evaporated, then fed the data into their model. The full results were recently published in the journal Physics of Fluids.

Chaudhuri is quick to point out that he and his colleagues are neither virologists nor epidemiologists. Furthermore, the predictions of their model are based on “idealized assumptions” that need to be further validated through experiments. Nevertheless, the model did enable the team to make a number of important inferences.

One is that respiratory droplets last longer – and are therefore able to travel farther – in cool, humid conditions than in hot, dry conditions. In fact, even in some moderate conditions, the model predicts that they could travel in air as far as 12 feet before they evaporate.

“If the relative humidity is greater than about 85 per cent, most respiratory droplets do not even evaporate, and small ones can travel very long distances,” says Chaudhuri. “Even in conditions where they evaporate, the leftover semisolid droplet nuclei could travel farther and remain suspended in air for hours in dilute concentration. But the questions on the infectiousness of the SARS-CoV-2 virus trapped inside these nuclei are yet to be settled.”

Another inference is that within a droplet cloud, it is the mid-sized droplets which spread the farthest prior to their evaporation. This is because in most conditions, smaller droplets evaporate more quickly, while larger ones are heavier and settle before they get propelled over long distances by a sneeze or cough.

“The longest-surviving droplets have an initial diameter between 18-48 microns for ambient relative humidity less than 80 per cent,” says Chaudhuri. “Fortunately, this is a size that can be filtered out by masks, which suggests that widespread mask usage can certainly help reduce transmission.”

Predicting the exact spread of COVID-19 is, Chaudhuri says, not the purpose of this preliminary model. Rather, the goal is to test out the possibilities of a first-principles modeling approach based on fundamental physics.

This is in contrast to most pandemic models, where the all-important rate constants that describe how the virus spreads are obtained by fitting available data from recent outbreaks after accounting for certain characteristics of the local population.

While this is a practical approach, one consequence is that the model only reflects the specific conditions of those previous outbreaks. If conditions change, those rate constants may not be valid for present and future outbreaks.

“What we wanted to do is build a model from first principles using physics, to derive the rate constant based on the frequency of collisions between infectious respiratory droplet cloud and the susceptible population, which in theory could be adapted to any set of conditions,” Chaudhuri says.

While further experimentation will be needed to refine the parameters used in the model, the approach could be combined with present state-of-the-art epidemiology to theoretically lead to more accurate predictions in the future.

“We would love to see the ideas we have put forward get incorporated into pandemic models used by professional epidemiologists,” says Chaudhuri. “They have the experience and knowledge to make real-life predictions and make public policy recommendations.”