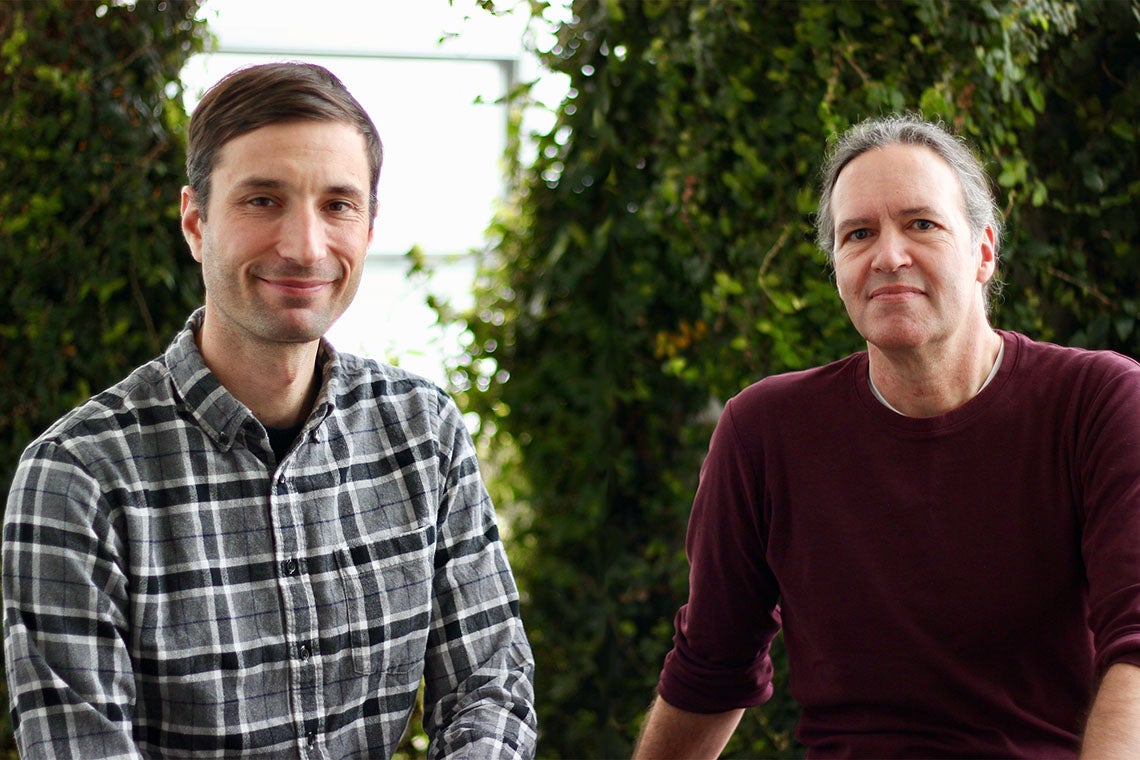 David Gallo (left) and his PhD adviser Grant Brown: Their findings are published in the journal Molecular Cell (photo by Jovana Drinjakovic)

DNA replication is more prone to errors at times of stress leading to mutations that could cause disease, research suggests

Cells go to great lengths to keep their genomes intact. But when resources are scarce, errors start creeping into the DNA code with potentially catastrophic consequences, new research suggests.

At no time is the DNA more vulnerable than when it is being copied during cell division so that it can be shared between descendent cells. To avoid mistakes during DNA replication, cells use proofreading enzymes that copy the code with high fidelity. Or so it was thought.

A new study led by Grant Brown, professor of biochemistry in the University of Toronto’s Donnelly Centre for Cellular and Biomolecular Research, suggests that at times of stress, DNA replication errors are far more frequent than previously appreciated. Although the researchers studied yeast cells, a similar process could ratchet up mutation rate in our own cells leading to cancer and other disease.

The findings have been described in the journal Molecular Cell.

The discovery took Brown and David Gallo, a PhD student who did most of the work, by surprise. They were studying DNA replication in cells raised under a limited supply of nucleotide bases that make up the A, T, C and G letters of the DNA code. “You can think of it as your car running out of fuel. We were removing gas from DNA replication,” explains Gallo.

Cells may encounter this type of stress when food is scarce or in disease, when resources are exhausted by fast-proliferating cancer cells, for example.

To make a copy of their genome, cells first unwind the double DNA helix into single strands, where each strand serves as a template against which new DNA is synthesized through complementary base pairing – A with T and C with G. This is usually done by DNA polymerase enzymes that are “super accurate and only make errors very rarely to ensure the blueprint of life is passed to the next generation with high fidelity,” says Brown.

But the lack of DNA building blocks led the cells to call on another type of DNA polymerase, which is more fallible. This was surprising because error-prone polymerases were thought to belong to an emergency repair machinery that is activated in response to physical damage, such as lesions in the DNA caused by UV light or some carcinogens. And while these enzymes act quickly to copy past the damaged part of the DNA, they also make mistakes.

This so-called “mutagenic repair” may seem an odd way to preserve the DNA, but it helps avoid worse genome-wrecking scenarios in which unwound DNA strands can lead to portions of chromosomes being lost.

“It’s better to copy and make some mistakes than to leave it uncopied and open to chromosomal rearrangements which would be much worse for the cell,” says Brown.

The study provides strong evidence of error-prone polymerases being used when there’s no apparent DNA damage. It suggests that these polymerases could be replicating more DNA than is appreciated and that this could be the source of more mutations that could lead to disease.

If the same is true for human cells, the finding could have implications for cancer research. Human cells have the same error-prone DNA copying machinery. And fast-proliferating cancer cells often experience what’s known as oncogene-induced replication stress, when they run out of fuel as DNA replication rates outstrip nucleotide supply. Under these conditions, the cells could resort to error-prone DNA replication, where new mutations could help cancer survive although this remains to be verified by future studies.

The study was supported by research grants from the Canadian Cancer Society, the Natural Science and Engineering Research Council of Canada and the Italian Association for Cancer Research.