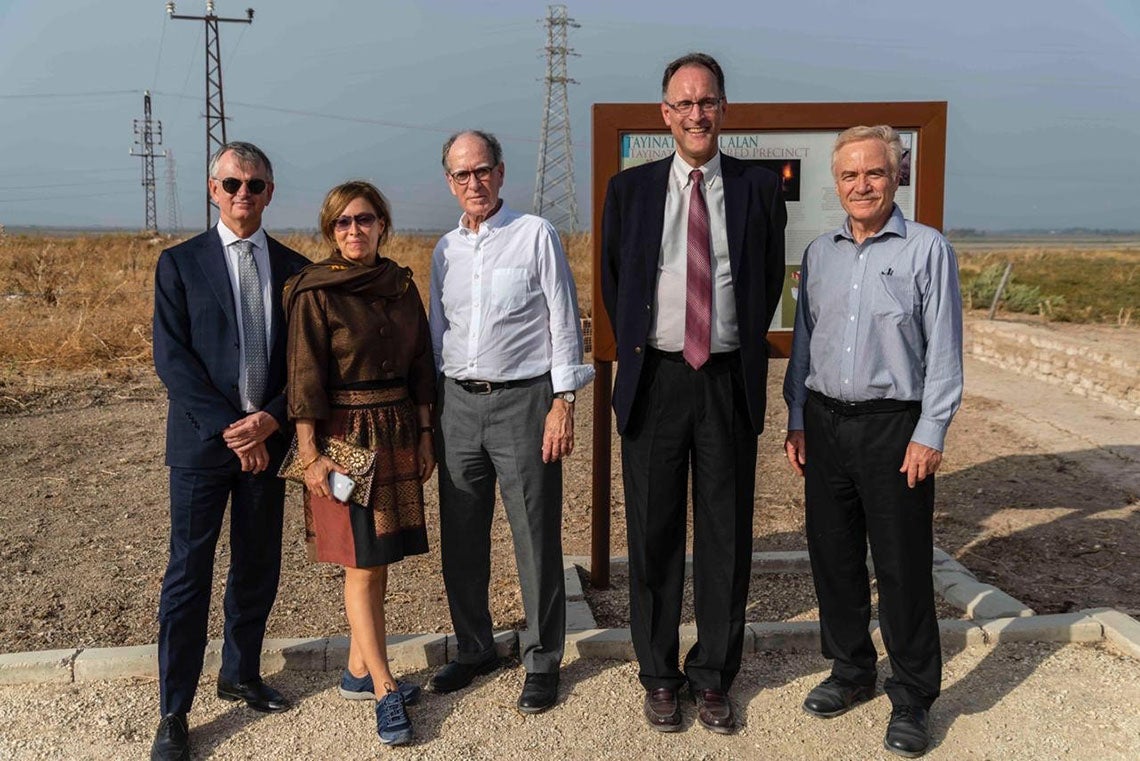 Archeologists at the University of Toronto are in advanced negotiations with Turkey’s Ministry of Culture and Tourism to establish an archeological park at Tell Tayinat, a site in southeastern Turkey, to deepen awareness and understanding of the Iron Age kingdom that ruled the region several millennia ago.

A primary component would be an interpretation centre to showcase the site’s unique cultural heritage, said U of T archeologist Professor Timothy Harrison at a special reception this week hosted by Canada’s Ambassador to Turkey, attended by high-level Turkish officials, a U of T delegation, and members of the media.

The park will also feature a state-of-the-art research and training facility that aims to preserve, protect and celebrate the area’s cultural heritage. Artifacts unearthed by U of T's Tayinat Archaeological Project date from more than 3,000 years ago. They include a magnificently carved stone lion, a sculpture of 9th-century BCE king Suppiluliuma, and the remains of a temple thought to be constructed during the time of King Solomon in the 10th/9th centuries BCE.

“Our goal is to establish a research centre and open air park to highlight Tayinat’s role as a strategic crossroads between the cultures and peoples of the Middle East,” said Harrison, director of the Tayinat Archaeological Project launched in 1999.

The site is located at the northern bend of the Orontes River at the intersection between the Anatolian highlands to the north, the Levantine coast to the south, and the lowland steppes of Syria to the east, two kilometres away. Refugee camps are located nearby and security walls along the Turkish-Syrian border are a reminder of the devastation of Syria’s 7½-years-long civil war.

Harrison said such a facility offers the prospect of building cultural understanding while creating opportunities for economic development in a region devastated by conflict. Beyond cultivating local awareness and interest in this important heritage, the site will encourage tourism, and create employment opportunities for local craftspersons and cultural heritage and tourism professionals.

“The threat of damage and destruction to the cultural heritage of the North Orontes Valley region is high, and has gained increased urgency with the encroachment and intensification of the ongoing Syrian civil war in the neighbouring Idlib and Afrin districts,” said Harrison, who is also chair of the department of Near & Middle Eastern civilizations in the Faculty of Arts & Science at U of T.

“The aim is to implement a training program that will create an enhanced ability within local communities to conserve and better-protect this cultural legacy – one that belongs to them and gives shape to their identities as communities today.”

The development will also secure a permanent international research and training facility for current and future faculty and students at U of T and other institutions worldwide.

Since 1999, Harrison and his colleagues on the Tayinat Archaeological Project (TAP) have been helping to advance understanding of early social complexity and the rise of state-ordered societies in the ancient world.

The transition from the Bronze to the Iron Ages saw the collapse of the great imperial powers of Egypt and Mesopotamia, and in Anatolia, the Hittite Empire and its capital situated at Hattusha. It has been said that the Hittite Empire, at its height, rivalled and challenged the regional influence of pharaonic Egypt.

“The cause of this disruption, and what happened during the Dark Age from 1200-900 BC – before Tayinat emerged as Kunulua, royal city of the Kingdom of Palastin or Patina, in the 9th century BC – has been a mystery that has captured the imagination of scholars for decades,” said Harrison. “By establishing an archaeological park on this site, we hope to be able to further tell the story about the Hittites that has slowly been revealed to us with each discovery we have made there.

“We are excited for the opportunity to enable the public to visit and learn more about the civilization it represents.”

The announcement comes amidst the 75th anniversary of diplomatic relations between Canada and Turkey.

“As Ambassador of Canada to Turkey, I welcome the ongoing collaboration between Canadian scholars and Turkey’s Ministry of Culture to protect and promote the cultural heritage of a region just a few kilometres from the conflict in Syria – a country both Turkey and Canada are committed to assist,” said Chris Cooter, a U of T alumnus who has led Canada’s diplomatic operations in Ankara since 2016.

Discussions are also underway between the two parties to expand their co-operation in another aspect of the cultural field, including through co-operation between museums in the respective countries. To that end, the delegation included Mark Engstrom, deputy director, collections and research at the Royal Ontario Museum, with the intention to stage a major exhibition in Toronto showcasing Anatolian civilization.

A possible outcome is a major exhibition of heritage artifacts uncovered at Tayinat and elsewhere in Turkey, to be staged first in Turkey before travelling to Canada and elsewhere.

“We’re so pleased to support this opportunity to bring these ancient societies to life so that people can make sense of how great civilizations of the ancient world contributed to life today,” said Professor David Cameron, dean of the Faculty of Arts & Science at U of T.

“I hope that both endeavours will document multiculturalism in a way that will resonate with people and reflect parallel experiences of today.”