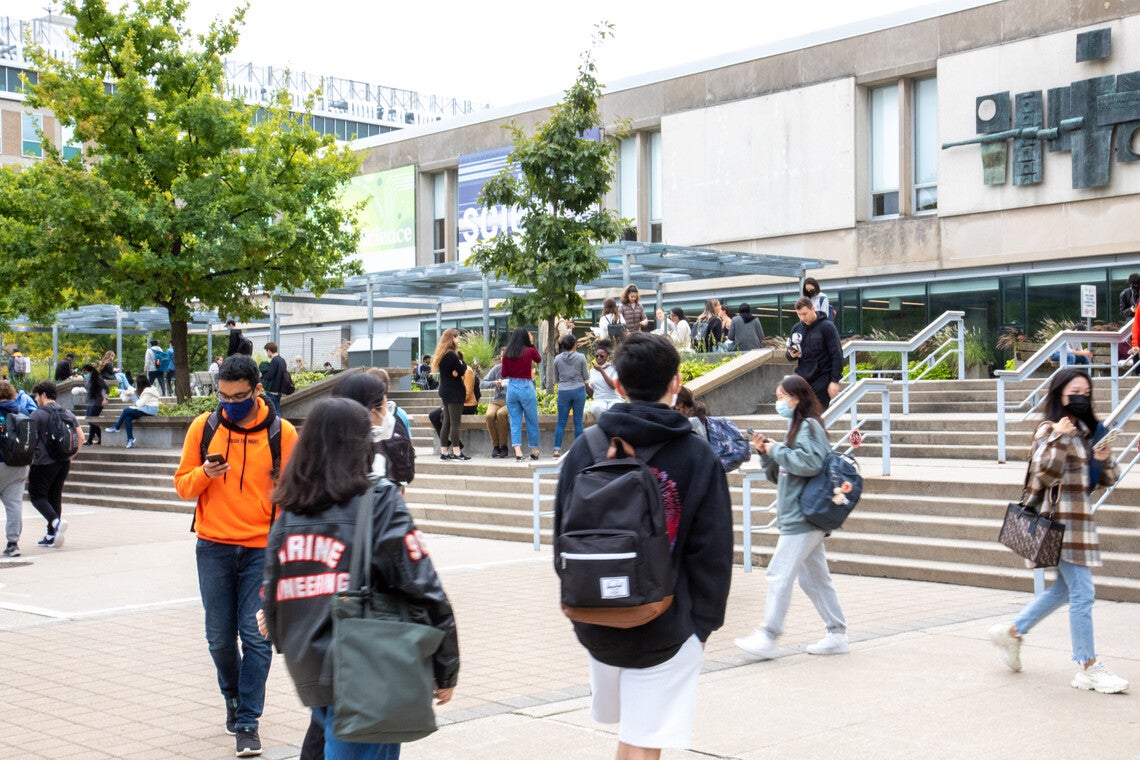 With the support of a $3.2-million donation by the Temerty Foundation, the University of Toronto is preparing to welcome more than 200 students from Ukraine whose studies have been disrupted by the ongoing war.

The first cohort of 20 students has already begun to arrive on campus as part of an exchange initiative between U of T’s Faculty of Arts & Science and the National University of Kyiv-Mohyla Academy (KMA), which is Ukraine’s oldest university and regarded as its top school for the social sciences and humanities.

They could be joined by up to 100 more students in September. Up to five KMA faculty are also coming to U of T as visiting professors.

Melanie Woodin, dean of the Faculty of Arts & Science, said U of T’s longstanding relationship with KMA – which includes initiatives such as the Petro Jacyk Program for the Study of Ukraine at the Munk School of Global Affairs & Public Policy – made it possible to put the exchange program together quickly.

“When the war broke out and we were looking to understand how we may support colleagues affected by the crisis, KMA came to mind for us because of our historic and productive relationship and with the encouragement of faculty, staff and volunteers,” Woodin said. “We were able to begin conversations quickly to learn about the particular needs of KMA students and faculty.

“I am incredibly grateful for the Temerty Foundation’s support of the university’s efforts, which will allow these scholars to continue their studies and research at U of T.”

For their part, James and Louise Temerty said the foundation’s donation reflects their belief in the importance of education to promote peace, tolerance and prosperity.

“Like so many others, we have watched the violence in Ukraine unfold with outrage and sadness – and noted the devastating consequences it has had on people’s lives, including students,” the Temertys said in a joint statement.

“By building on our existing relationship with the University of Toronto, we hope to help sustain the mission of the Kyiv-Mohyla Academy and ensure the continuity of its students’ educational needs.”

The KMA partnership is just one of many initiatives across the university to support students in Ukraine.

The department of computer science, in the Faculty of Arts & Science, and the Vector Institute for Artificial Intelligence, swiftly moved to create a program for 29 upper-year undergraduate and graduate students from Ukrainian universities via a summer research exchange program. U of T Mississauga, too, is running a summer exchange program that is expected to accept 20 undergraduate students.

U of T is also accepting displaced students from Ukraine through its Scholars at Risk program, which is being supported by a $1-million matching fund for donations.

The U of T exchange effort – 2022-2023 U of T Special Exchange Program – Ukraine – is overseen by the Centre for International Experience, which handles applications from students with Ukrainian citizenship as well as non-Ukrainian nationals attending a post-secondary institution in the country. Students who come to U of T via any of the pathways overseen by the program will not need to pay tuition and incidental fees.

For the KMA exchange program, students were invited from across the breadth of disciplines offered by the Faculty of Arts & Science, with the majority planning to take courses in the humanities and social sciences. Graduate students will become members of the department most closely aligned to their current disciplines and will be provided with graduate research supervisors.

The five visiting KMA professors are expected to lead smaller cohorts of KMA students who will be grouped by discipline to help ensure a smooth transition to U of T life. The Faculty of Arts & Science will also foster connections between the KMA arrivals and the wider U of T community, as well as the Ukrainian diaspora in Toronto.

David Palmer, U of T’s vice-president, advancement, thanked the Temerty Foundation for supporting U of T and the Faculty of Arts & Science in removing barriers that stand between displaced students in Ukraine and their pursuit of higher education.

“I would like to express my deepest gratitude to James and Louise Temerty for their unflinching support of U of T’s efforts to boost access to education for people displaced by this devastating war,” Palmer said.

“Their visionary gift will help U of T and the Faculty of Arts & Science safeguard the continuity of students’ educational needs and provide a safe and supportive environment in which to continue their studies and research.”

Woodin noted that the inbound exchange is intended to be a temporary measure that supports the continued education, research and teaching activities of KMA students and faculty – and that U of T and the Faculty of Arts & Science are cognizant of the need to avoid contributing to a Ukrainian “brain drain.”

She said it is hoped that KMA students and faculty will be able to return to a peaceful Ukraine after their year term, but that U of T will continue to be a strong partner should the scholars require ongoing support. She added that the inbound exchange was agreed to as the first step in a wide-ranging partnership that will include student and faculty exchanges as well as research collaborations.

“The Faculty of Arts & Science stands to benefit from our academic collaborations with KMA because we have great research synergies,” Woodin said. “But we’re also going to benefit at the undergraduate level because having students together in the classroom – whether physically on exchange, or in virtual Global Classrooms – enables them to learn from each other on a range of topics, given that they have different lived experiences.

“The arrival of KMA students and faculty this year represents the foundation for our future ambitious partnership.”

Using mechanisms already in place for its undergraduate research summer program, the department of computer science was able to launch its program just a few days after Russia invaded Ukraine, according to Professor Marsha Chechik, chair of the department.

“When we heard of the massive exodus of refugees, we began looking for ways to help and make a substantive difference. A lot of us have connections with scholars in Ukraine,” said Chechik, who was born in the former Soviet Union. “Our goal was to allow students an opportunity to study in a peaceful environment and with world-class faculty.

“With support from the department, the Vector institute and University Advancement, the program will welcome 29 young scholars whose studies were disrupted by the war.”

Chechik said most of the arriving students are women due to the Ukrainian government barring most men of conscription age from leaving the country.

“This was obviously not planned and is not in our control, but we are nonetheless excited that these women will come and study with us,” said Chechik, whose own lab will be welcoming two of the arriving students. “Computer science is a very male-dominated discipline, so we will benefit from being able to welcome some outstanding female talent.”

Going forward, Chechik said she envisages the program offering opportunities to students in other conflict-stricken parts of the world.

“This process was focused on students from Ukraine, but I’m hoping that it can be extended past this year and to other places where there are scholars in need.”

At U of T Mississauga, meanwhile, its summer exchange program is being co-ordinated by the Office of the Dean with support from the Office of the Registrar, International Education Centre, Student Housing and Residence Life and other student affairs and services departments.

The program is provided at no cost, and includes in-person academic activities, on-campus housing, a stipend and travel costs.

“These students are facing so many challenges, and we don’t want the loss of their education to be another,” said Rhonda McEwen, vice-principal, academic and dean at U of T Mississauga, noting similar assistance was recently extended to students displaced by unrest in Syria and Afghanistan.

“The university has several initiatives in place to support out-of-country international students at risk, and we will continue to look for ways to help these students – and those from other countries – stay on track despite the terrible hardships they are enduring at home.”

Read more about the exhange program at BlogTO