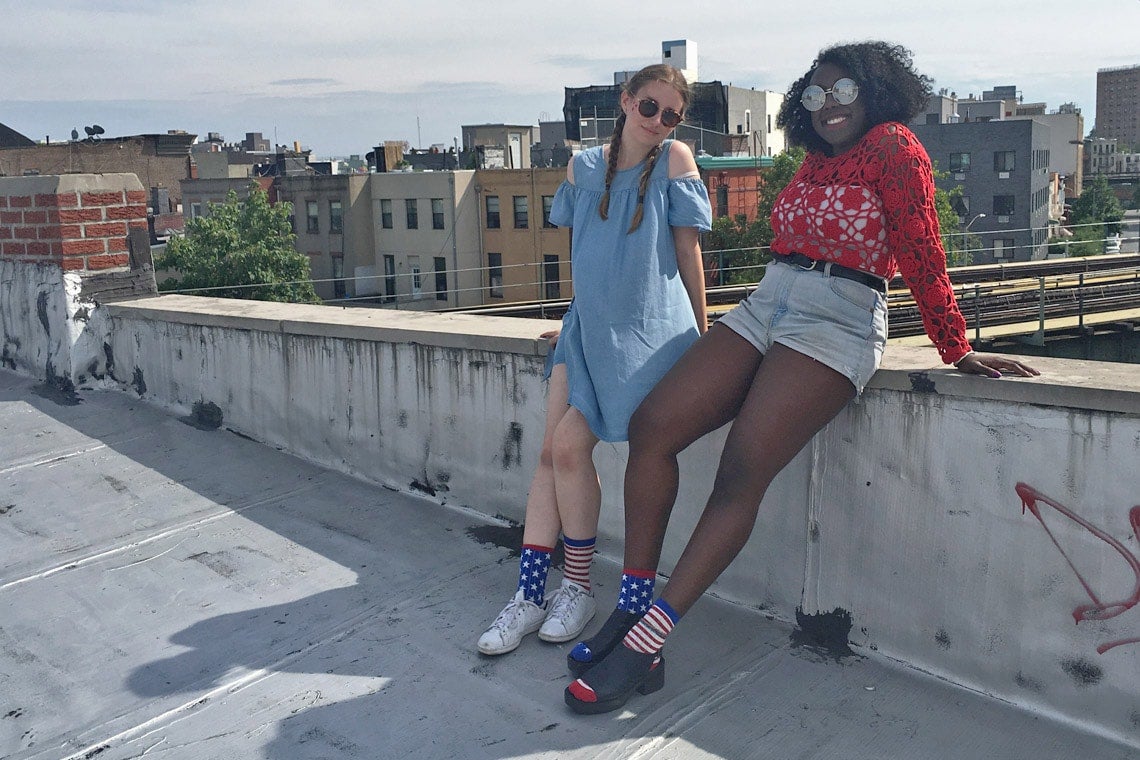 It’s not often you meet your best friend on an internship.

Katerina Mizrokhi and Melissa Vincent act as though they’ve known each other all of their lives – nuzzled close together, beaming uncontrollably and even finishing each other’s sentences. But the fourth-year University of Toronto urban studies students only met half a year ago.

We chatted at the Kensington Market café where they first got together, days after they returned from a five-week research project in New York City.

Their time in New York was part of a summer internship, developed by U of T’s urban studies program in partnership with the Martin Prosperity Institute (MPI) and New York University (NYU). It was funded by the Faculty of Arts & Science, Dean's International Initiative Fund (DIIF) and Innis College.

An opportunity to conduct research abroad is rare for undergraduate students, but Mizrokhi and Vincent didn’t take it for granted, exceeding everyone’s expectations.

“They really brought it big time on this project,” says Vass Bednar, MPI’s associate director. “It’s hard for young people to be able to go to a different city and find a place to live in a limited amount of time – and complete a high quality research project in a short period of time.”

Mizrokhi and Vincent’s research focused on the ways culture and community interacted with each other.

They looked at the MoMa Ps1 in Queens, Long Island City, the Brooklyn Museum in Brooklyn and the Frick Collection in Manhattan.

Mizrokhi and Vincent have an advantage when conducting ethnographic research, says Bednar, in that they have the ability to blend in. “If you think about their immersive approach to their research – at the face of it they’re two young, millennial women – they could be tourists or people visiting in town walking around these museums while taking note of the surveillance, the race, ethnicity and status in various museums.”

The students looked at the ways art institutions can lead to or repel gentrification in the neighbourhoods where they’re based.

“What we found with the Brooklyn Museum is it can act as a place of resistance to [gentrification] – providing that venue for conflicting narratives and the intention to resist and simultaneously reflect narratives of local residents that may not have a platform to do so.”

Vincent says the Brooklyn Museum is a model for what cultural institutions around the world could do to interact with the community that surrounds them.

“It stops being a space to just consume art, and becomes an area for radical community mobilization and action,” she says.

Both Mizrokhi and Vincent say that Toronto’s galleries and museums haven’t been able to serve that purpose to the same extent.

“Toronto as a city relative to its residents is a little bit more self-conscious than New York with its identity and how it wants to articulate that,” says Mizrokhi.

“I think there is a little bit of hesitation in Toronto especially when you’re in art spaces and social spaces and especially in cool hip environments,” says Vincent.

“They’re so comfortable in the idea that they are going to have a skeleton format and the content will be determined by other places – other places that are innovative, coming up with new concepts and ideas and we are just going to have them visit for a while,” she says.

While in New York City, Mizrokhi and Vincent were supervised by NYU School of Professional Studies clinical assistant professor Steven Pedigo at the Schack Institute of Real Estate, who they praised for guiding but not dictating their research.

“Our supervisor was super flexible and was really great at just letting us take the reins on our own project,” says Mizrokhi.

“It’s was a really open but really supportive and really collaborative space for us to be in,” Vincent adds.