U of T symposium tackles carbon markets and climate finance 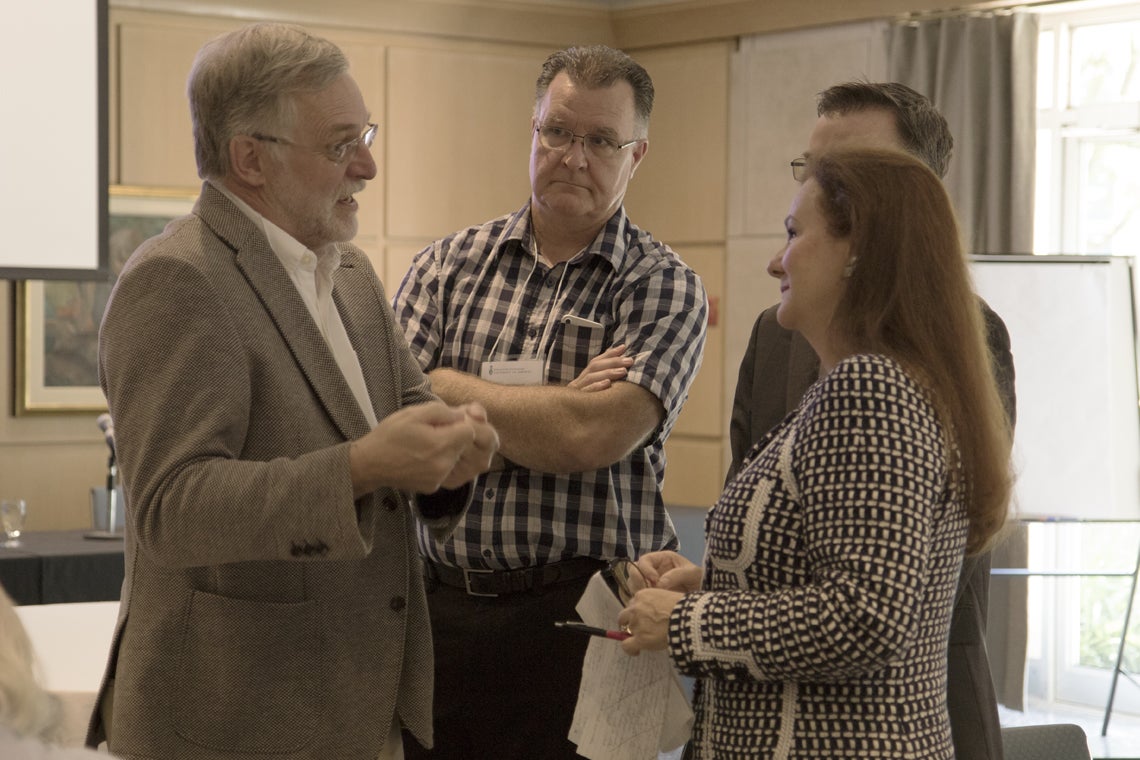 U of T's John Robinson (left) speaks to another conference organizer, lawyer Patricia Koval, a member of the School of the Environment's environmental finance advisory committee (photos by Noreen Ahmed-Ullah)

Looking for creative ways to fund efforts to reduce its carbon footprint, the University of Toronto brought together the financial community, university leaders, local government officials and climate change advocates for an all-day forum on carbon markets and sustainable finance.

As organizations and governments across North America try to reduce greenhouse gas emissions (GHG), U of T hopes that driving the conversation on funding climate change initiatives could have implications beyond the university.

President Meric Gertler told the gathering that the discussion was very much in keeping with U of T’s city-building efforts and its role as “an agent of change in the community.”

“The challenge of climate change is immense,” said President Gertler. “If we are to have any hope of achieving the emissions reductions necessary to avoid the worst consequences, we need to work together to explore, and then implement, the best means to achieve our climate targets.

“By offering the University of Toronto as a case study of innovative approaches to carbon finance, we hope this conference will generate insights that will help us to meet our targets. At the same time, these insights may well be relevant to other organizations and jurisdictions also facing the challenge of financing substantial reductions in GHG emissions.”

As part of Ontario’s program to reduce greenhouse gases, U of T has set a goal to reduce emissions by 37 per cent from 1990 levels by 2030.

To meet the target, U of T has embarked on retrofitting old buildings -- many of which qualify as heritage buildings – constructing new ones with fully sustainable features, and looking at acquiring carbon offsets. Earlier this year, U of T received $26.7 million in new provincial innovation funding to launch several “green” projects.

President Gertler has also established a presidential advisory committee on the environment, climate change and sustainability. The committee has released recommendations on engaging students, faculty, staff and the external community, including initiatives to treat U of T’s campuses as a living lab so that all operational activities like new buildings, retrofits, landscaping and purchasing are evaluated for performance on sustainability metrics.

With last week’s announcement that the province will be scrapping its cap-and-trade program, the university will likely need to explore alternative financing options, especially in the private sector, to fund many of the initiatives.

“It will be very important to consider how to leverage private capital,” said Tiff Macklem, dean of the Rotman School of Management, who spoke at the beginning of the forum. “It may force us to be more creative.” 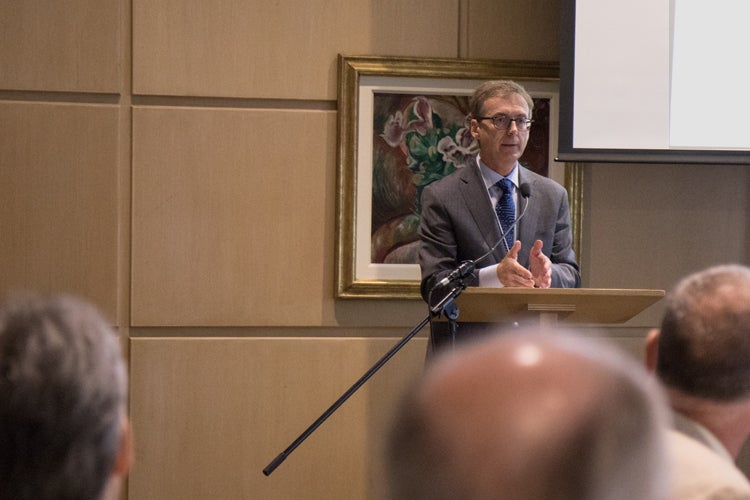 Tiff Macklem, dean of the Rotman School of Management, talks about his role on the federal expert panel on sustainable finance

Other speakers included Jim Baxter, director of the environment and energy division at the City of Toronto, who talked about the city’s various green efforts and finance initiatives, including its partnership with Enwave Energy Corp. to explore low-carbon energy networks; Robert Keen, who heads Forests Ontario and talked about acquiring carbon offsets; Tim Stoate, who oversees the Atmospheric Fund’s impact investing, and designs and tests new financing options for low-carbon projects; and Shaaj Vijay of RBC Capital Markets, who discussed the use of green bonds.

Macklem, who was recently appointed by the federal government to chair an expert panel on sustainable finance, spoke about the opportunities in Canada and at U of T to help develop and test ways for the market to adapt to climate change risks, fund the transition to a low carbon economy, and “provide leadership to the world.”

“If Canada comes to the table with a financial structure, that will get some attention because we have a reputation for financial stability,” he said.

John Robinson, U of T’s presidential adviser on the environment, climate change and sustainability, who was one of the co-organizers of the conference, said he hopes that joining the Oxford University network will lead to a greater focus on sustainable finance at the university.

“There’s a lot of finance strength at Rotman, but there hasn’t been until now a focus on sustainable finance,” said Robinson, who is a professor at U of T’s Munk School of Global Affairs and the School of the Environment in the Faculty of Arts & Science. “We’re hoping all of these activities will contribute to building academic capacity on sustainability across the university.”

The forum came out of U of T’s alliance with 14 other leading research universities in North America that make up the University Climate Change Coalition, or UC3. One of the requirements for U of T to join UC3 was a pledge to reduce its carbon footprint and to develop programming to engage the Toronto region on sustainability issues.

The alliance formed after U.S. President Donald Trump’s decision to pull out of the Paris Agreement on climate change. At the time, the University of California Systems’ President Janet Napolitano, the former U.S. Secretary of Homeland Security under then President Barack Obama, decided to bring together research-intensive universities with local governments and business leaders to continue with strong carbon reduction goals. 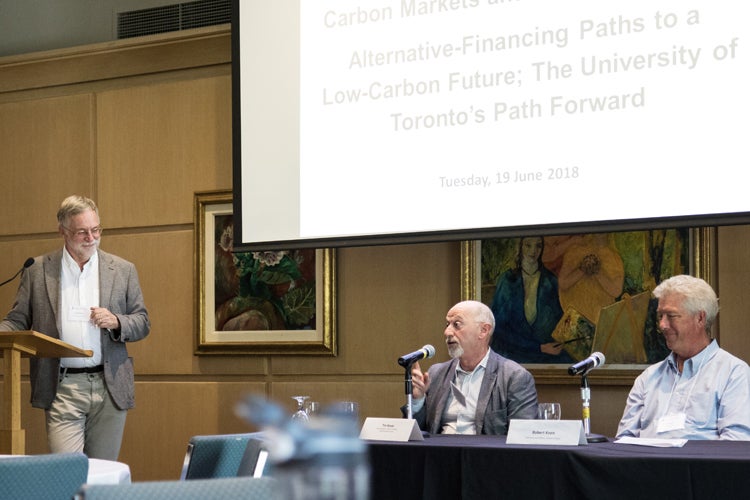 Professor John Robinson leads a discussion on creative sustainable financing, with speakers including Tim Stoate, vice-president of impact investing at The Atmospheric Fund, and Rob Keen, CEO of Forests Ontario

“The only thing this announcement did was galvanize everybody in the country who is working on climate action,” said Matthew St. Clair, who is leading sustainability efforts across the 10-campus University of California system.

“You’re not alone,” he told participants. “This was a huge motivator for climate actors in the United States.”

Scott Mabury, U of T’s vice-president of university operations, said he heard a lot of good ideas at the forum, and the university will now look at, “How much can we do, what can we prioritize?”

“We now need to plan very formally how we’re going to hit the 2030 target,” he said.

Physics Professor Kimberly Strong, director of U of T’s School of the Environment, helped co-organize the conference. She said one of the takeaways was that other countries like China have significantly ambitious cap and trade programs, and Ontario now runs the risk of being left behind.

“Carbon dioxide emissions are very clearly increasing. We can see that in our ground-based measurements,” she said. “We can see it in new datasets coming out of satellite observations. We are learning more and more about the carbon cycle, and how emissions into the atmosphere interact with biosphere and oceans, and we need to be reducing those emissions.

“As a scientist, I am interested in understanding what is going on in the atmosphere, but we also need to make a change in what we’re doing. While we make the case around cultural and behaviour changes, we also need to make an economic case for reining in greenhouse gas emissions. We should be developing green technology. We should be developing financial instruments. If we don’t do that, other countries will be moving ahead, and at some point, we’re going to be left scrambling to catch up.” 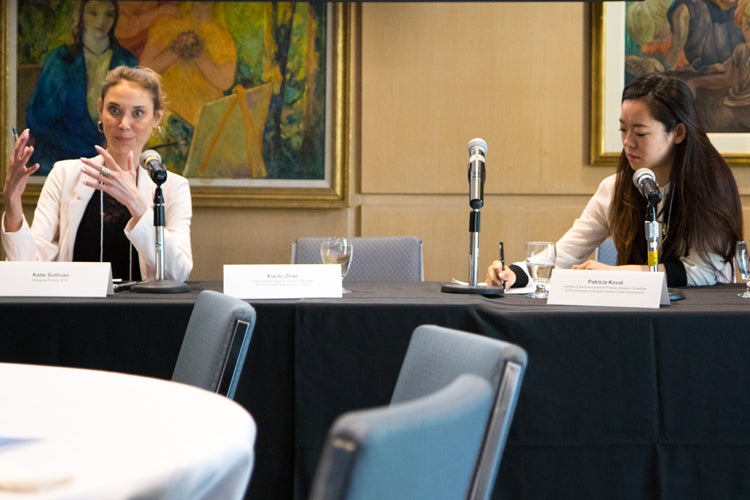 Katie Sullivan, managing director at the International Emissions Trading Association (IETA), and Xiaolu Zhao, the China Climate Initiative program manager with the Environmental Defense Fund, talk about carbon markets around the world including in China and Ontario