U of T students raise more than $10,000 for hotdog vendor with GoFundMe 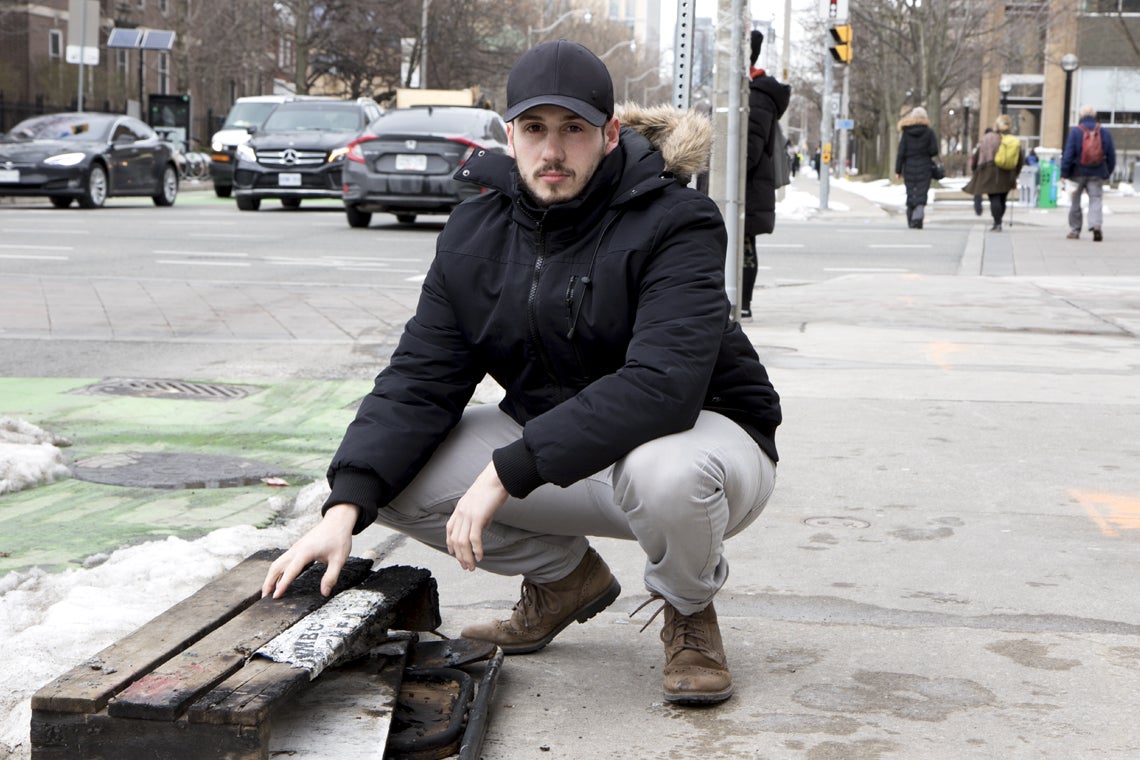 Graduate student David Wosnick, next to the remains of a hotdog cart that was destroyed in a fire Sunday night. Wosnick started a GoFundMe campaign that has raised more than $10,000 (photo by Noreen Ahmed-Ullah)

When David Wosnick saw photos online of a hotdog vendor's cart up in flames outside Robarts Library Sunday night, he knew he had to do something to help.

Wosnick started a GoFundMe campaign to get a new cart for the vendor, and then walked through the ice storm to Robarts to check up on him. Within hours, the campaign had raised $700 and by the next day had exceeded Wosnick's $5,000 goal. By mid-week, students from across the university and the public at large raised more than $10,000.

"I saw the photo [of the cart on fire] and I felt someone was in need,” says Wosnick, a first-year master's student in cell and systems biology. “My heart went out to him, and so I started the GoFundMe campaign.”

In the process, Wosnick has found himself a new family. The vendor, a 65-year-old immigrant from Afghanistan, and his family have invited Wosnick over for dinner – an offer he'll take up after exam season.

“I really feel like the family has become a family to me,” he says. “I've become so close to them over the last couple of days. They're just very sweet people.”

Prior to the incident on Sunday, Wosnick would run into the vendor occasionally when he'd get a hotdog outside Robarts. Sometimes, the vendor would ask him about classes, his research, and in turn share something about his own life.

“He's an extremely hard-working man,” Wosnick says. “He's a family person, very independent. He works 14-hour shifts, then buses home to Scarborough, gets about four hours of sleep and then comes back and does the same thing the next day.”

Toronto police have said when they arrived at the stand in the Hoskin Avenue and Sussex Avenue area just after 8:40 p.m. on Sunday, the propane tank of the cart was engulfed in flames. No one was injured. Wosnick says the vendor had stepped away from the cart to go to the bathroom, and when he returned it was on fire.

In starting the GoFundMe campaign on Sunday night, Wosnick wrote: “Anyone who has ever come to this stand has encountered how sweet this man is. He truly loves this university and the students who attend it. Most of us have stopped by for a hotdog and a quick chat between classes or study breaks and have enjoyed his company along the way. As students of U of T, some of us forget that not everyone has been lucky enough to be offered the path of education. I can only imagine what was going through his head as he watched his livelihood burn down.”

Within a few hours, the campaign had raised $700, with students quickly jumping in to help and thank the vendor for selling hotdogs in the cold weather. By 3:30 a.m., Wosnick decided to see if the vendor was still outside Robarts to tell him about the campaign. He walked over and found the vendor in the freezing cold, waiting for a truck to tow away the cart. The vendor was grateful that people were trying to help.

He has, however, shared his gratitude to all of those who raised funds for him, via Wosnick.

“After what happened to my cart I had only one thing in my mind and it was what I am going to do next to get by financially,” Wosnick read out loud from the vendor's message. “Thank you especially to the students at U of T who started this campaign to help me and my family. I am forever grateful for what they have done for me. The funds raised today are enough for me to start all over again and serve you for years to come. You have truly made me feel part of this amazing U of T community and beyond.”

Wosnick says he was pleased by the reaction on GoFundMe.

“I love when these kinds of things happen,” he says. “You never think it would happen to you that you would be able to start such a massive effort and get such an overwhelming response.”

Read more about the campaign at CBC News

Read about Wosnick's efforts at the Toronto Star