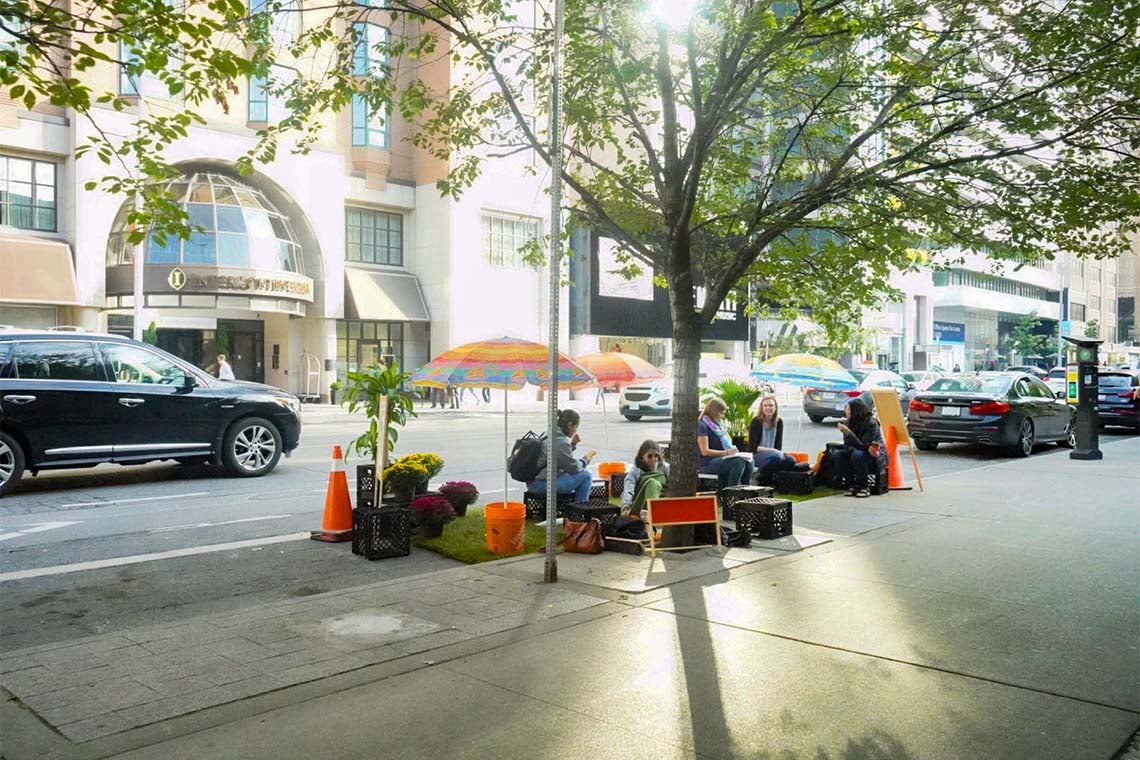 U of T students take over a parking space on Bloor Street West to mark PARKing Day, a global effort to draw attention to the need for public space (photo by Gabriella Shiyuan Zhao)

What started as a course assignment in urban landscapes and planning resulted in a real-life guerrilla installation by University of Toronto students that’s designed to bring attention to the need for public space around the world.

PARKing Day has been marked annually since the first PARK in San Francisco in 2005. Taking place the third Friday in September, the event sees urban enthusiasts around the world select a parking space – normally reserved for automobiles – and transform it into a mini-park for public use.

The U of T installation in front of 273 Bloor Street on Friday received funding to initiate the project from U of T’s School of Cities.

“We think of Toronto as being a global city. Yet this is a global initiative that's unrepresented here,” says Kelly Gregg, a PhD candidate in the department of geography and planning in the Faculty of Arts & Science. She was also the course instructor who assigned the parking day proposal last term.

“My hope is that it challenges people to think of the street as a public space, not just for automobiles, but for human use as well.”

Gregg, whose planning dissertation traces the arc of pedestrianization in American and Canadian contexts – including how concepts of pedestrian shopping malls have failed, yet are being reintroduced for public space reasons – co-coordinated the installation alongside students who were interested in translating their assignment proposal into a real project. Stefan Soldovieri, chair of the department of Germanic languages and literatures, reached out and connected the team with additional students from the department’s sustainability initiative, futurGenerator. 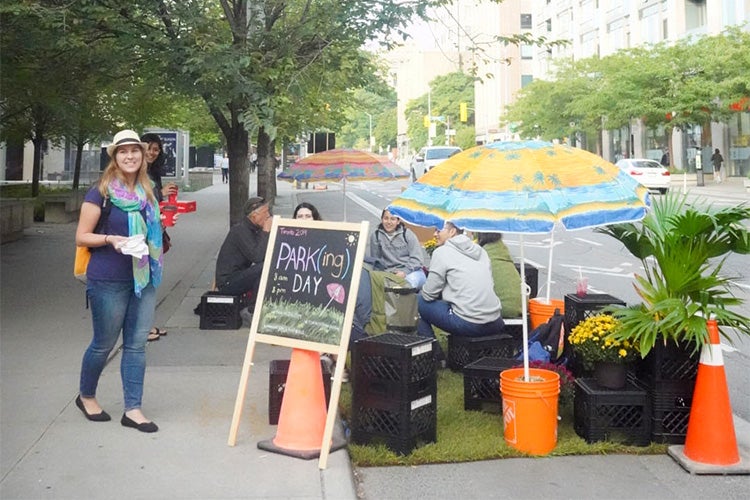 Willow Cabral, a second-year University College undergraduate studying human geography, geographic information systems (GIS) and urban studies in the Faculty of Arts & Science, did preliminary research on initiatives for PARKing Day in Toronto, but found the most recent mentions date back to 2012.

“My exposure to parking day was through the class, and I thought it was a really cool, fun project,” says Cabral.

“A huge part of this project is sparking a dialogue, even if it's just between two people walking on the street, about how we can redesign our cities and rethink cities to be more sustainable and people-oriented.”

Occupying a space less than three metres wide in front of the Royal Conservatory of Music, the “park” site was selected for a number of factors: proximity to U of T campus, wide adjoining sidewalk, pedestrian traffic, neighbouring bike lane and access to car parking on each end. Traffic cones and plants marked the edges of the park for safety.

“We are not using the space for free. We are paying for it as if we are a vehicle, but we’re just challenging the use of it for a different purpose,” says Gregg.

The green sod, beach umbrellas, milk crates and plants making up the park attracted a lot of interest from pedestrians, bicyclists and drivers. The team reported smiles, questions and encouragement from passersby, as well as many people asking to take photos.

Sneha Mandhan, a PhD student in planning who looks at how streets function as public spaces in cities, says the team started out with a very ambitious plan, but had to scale back their original design.

“We needed it to be fairly mobile because it is a guerrilla intervention – there is a possibility that we might need to do a very quick install and de-install,” says Mandhan, adding that the group explained, if asked, that the parking spot is public space and that they would relocate the park if asked to move.

She says sustainability has also been a sub-theme.

“We're making sure we're not using any materials that can't be reused.”

Mandhan’s doctoral specialization is in South Asian studies and she plans to develop her research proposal around India’s changing streets. Marginalized communities in India have always used streets as public gathering places, but the communities are increasingly pushed aside by widening traffic lanes. She says Toronto, too, is getting denser by the day.

“The city needs more public space,” says Mandhan. “At least in downtown there's a lot of scope for reducing the footprint of cars and reclaiming some of that space for people.”

“[The] King Street Pilot Project has a similar ethos,” adds Gregg. “[Parking day] is expanding from that, and carrying it forward in a very temporary, tactile way.”