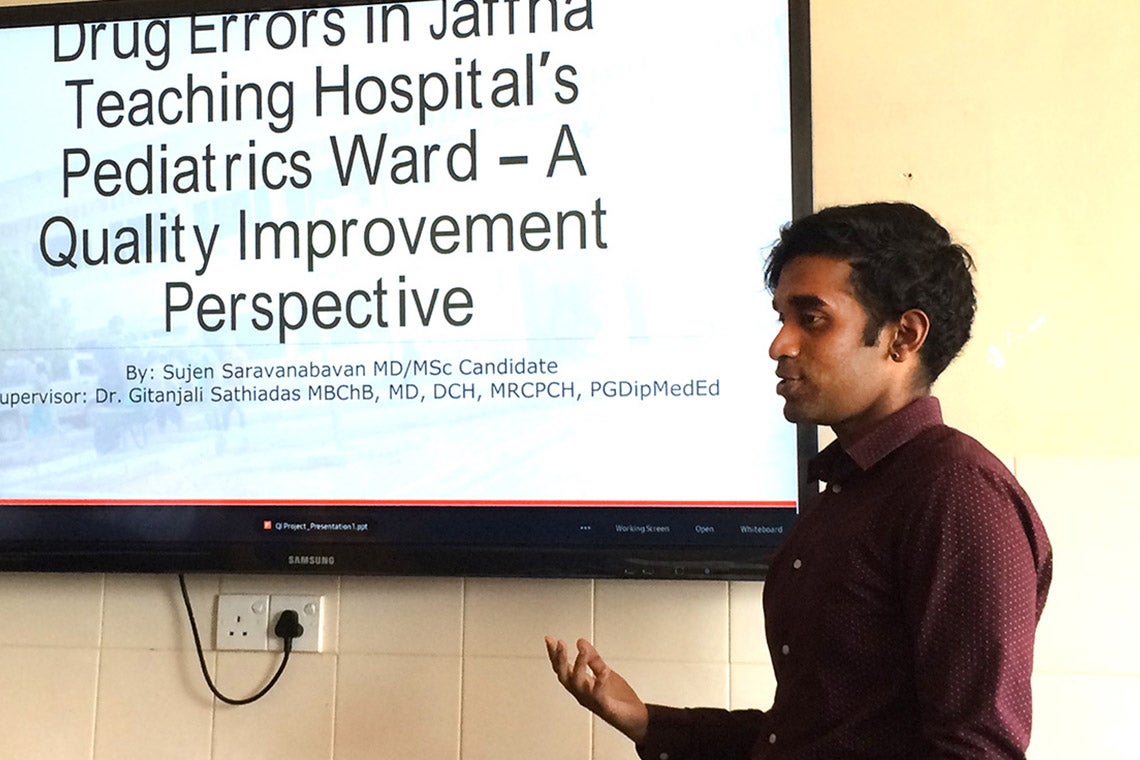 As part of his joint master's of science and MD program at the University of Toronto, Sujen Saravanabavan has opted to conduct a quality improvement project on the pediatric ward at Jaffna Teaching Hospital

In the city of Jaffna located on the northern tip of Sri Lanka’s coast, a busy public hospital is making plans to reduce drug errors on its pediatric ward, where a chaotic setting combined with overworked medical staff makes for an environment prone to mistakes.

As part of his joint master's of science and MD program at the University of Toronto, Sujen Saravanabavan, a clinician in training and a master’s student at the Institute of Health Policy, Management and Evaluation in the Dalla Lana School of Public Health, has opted to conduct an international seven-week-long quality improvement project on the pediatric ward at Jaffna Teaching Hospital, where both of his parents were treated as children. He wants to use the opportunity to make a change in a health-care setting where human resources are low.

“Drug errors are not often talked about, but they have a significant impact on patient care,” said Saravanabavan. “The perception of doctors and even patients who have a deep trust in the system is that you cannot make mistakes in a clinical setting.”

The hospital, with more than 1,200 beds, has been actively trying to improve its drug administration system and implement quality improvement measures, but it is hindered in part by its physical capacity. There are no private hospital rooms here, or wards designated by disease. High volumes of patients are admitted into the same space regardless of their current illness and a lack of a data-tracking system has made it difficult to see when and where drug errors occur.

Saravanabavan started by observing the environment and conducting interviews with stakeholders on the health-care team, from nurses to pediatricians. He quickly found that many felt uncomfortable discussing drug errors at all.

“I knew then I had to change my tactics and instead began to ask them, what makes your job hard? Delivering medications in this kind of a chaotic setting is undoubtedly hard,” said Saravanabavan.

Drug errors and patient safety issues occur in Canadian hospitals too. These include giving a continued dosage of a medication to a patient after it was supposed to be stopped or not having an appropriate plan in place for adverse reactions. These same problems were occurring on the pediatric ward at the Jaffna Teaching Hospital, but with the added dimension of a lack of resources to help streamline the drug administration process

“Unlike Canadian hospitals, there is no clinical pharmacist on site who could check on the history of patients and ensure medication errors are avoided. Here, doctors and nurses end up having to take on this pharmacist role, despite the busyness of the ward, which results in a potentially increased frequency of drug errors,” said Saravanabavan.

To assist staff, Saravanabavan wanted to implement deliverables that could amount to sustainable changes that would continue long after his seven weeks on the project were complete. He created a process map that outlined how a patient is given medications from the time of admission to the time of discharge. He facilitated group conversations about the root causes of drug errors and ran a seminar on quality improvement.  He also created a drug management chart to help nurses on the job.

“It is a very simple system,” said Saravanabavan, “but it allows them to see when Nurse X is working on drug administration and thereby reduce distractions.”

Implementing changes in any hospital setting can be challenging, and for Saravanabavan, the added stressor of conducting most of his interviews in a different language was difficult, but the opportunity to support practitioners in pediatric care and intervene in an effective way is something he was drawn to.

“Pediatric medicine represents an upstream way of interacting with society’s problems – there is a real potential to intervene and positively impact or shape the trajectory of a young person’s life and health,” said Saravanabavan.

In addition to some of his other changes, Saravanabavan has also helped to create a data structure to track when drug errors occur and reinforced this by creating a common drug error guide. Senior hospital staff have now been tasked with tracking and recording drug errors when and if they occur, so that moving forward, the hospital will know what changes need to be made.

“To implement any kind of quality improvement initiative in health care, you need to be able to see and measure whether there has been any improvement,” he said.

While Saravanabavan encourages other students to consider international experiences, he also wants them to be mindful and ethical in their approach to interacting with international health systems.

“I’m a lifelong learner,” said Saravanabavan, “and this opportunity has changed the way I look at the health systems reminding me of the thoughtful conversations that need to take place especially in international systems, to ensure that quality improvement projects are ethical and considerate of cultural elements.

"I have no doubt that this will benefit my clinical expertise in the years to come.”