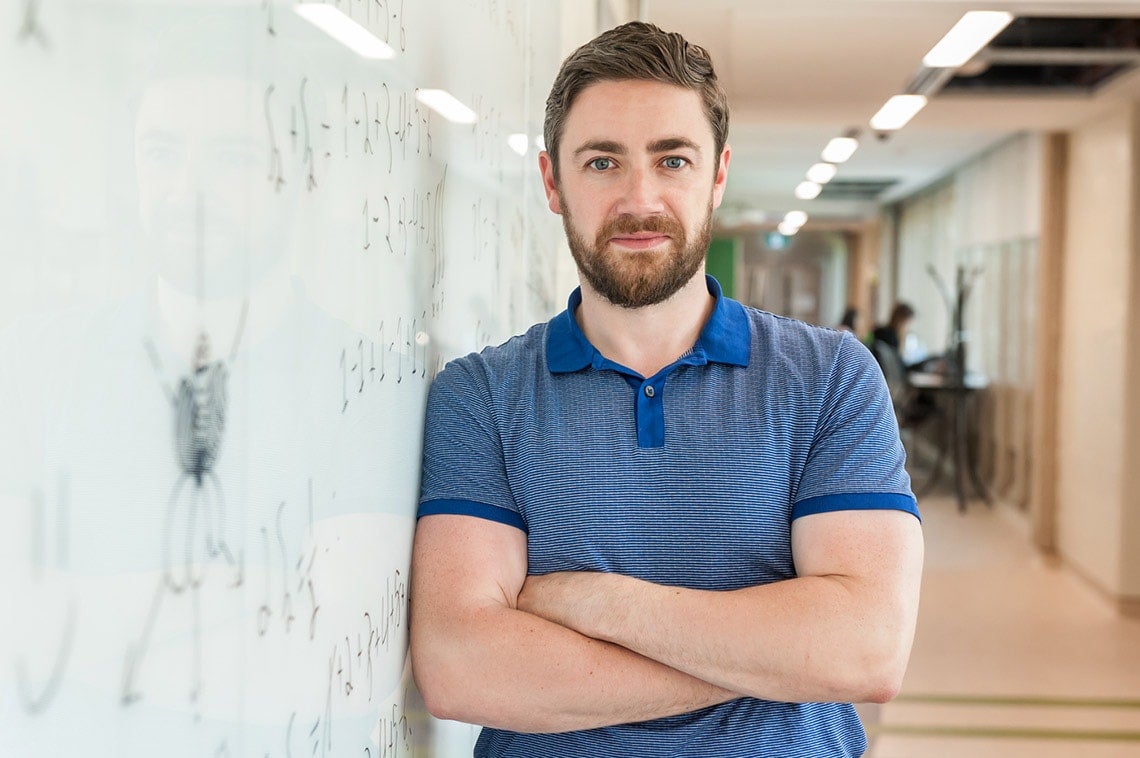 “Our work has the potential to create new drugs to battle aggressive blood, brain and breast cancers, and this support will help to accelerate that research,” says Professor Patrick Gunning (photo by Lisa Sakulensky)

Professor Patrick Gunning, a medicinal chemist whose lab at the University of Toronto is revolutionizing how cancer-killing drugs are produced, has signed a $22-million investment deal for Janpix, an oncology-focused startup that he co-founded. The investment came from Medicxi, a European venture capital firm.

“We are absolutely delighted that Medicxi has made this visionary investment in technology developed right here at U of T Mississauga,” says Gunning, who holds the Canada Research Chair in Medicinal Chemistry. “Our work has the potential to create new drugs to battle aggressive blood, brain and breast cancers, and this support will help to accelerate that research and get those compounds to the patients who need them.”

Gunning’s laboratory at U of T Mississauga’s Centre for Medicinal Chemistry is developing compounds that attack various forms of cancer. Their efforts are focused on signal transducers and activators of transcription (STATs), a group of proteins that regulate several genes linked to multiple hallmarks of cancer, including uncontrolled cell proliferation and cell immortality.

STATs have been identified in numerous human cancers, including breast, blood and brain tumours. In particular, Gunning’s lab is developing ways to inhibit two STAT proteins, STAT3 and STAT5. Janpix, led by CEO Roman Fleck, is focused on bringing a STAT3/STAT5 drug to clinical trials within 18 to 24 months.

“We are excited to continue supporting Janpix and Professor Gunning's work on STAT inhibitors,” says Giovanni Mariggi, a principal at Medicxi and board member of Janpix. “Janpix has made great progress in developing tractable compounds that inhibit these difficult-to-target proteins. The role of STATs in multiple tumour types is supported by vast data and the emerging evidence of their role in tumour immunity adds an extra dimension to the potential impact these new drugs could have on patients.”

“It is exciting to see such investment, which will translate academic concepts into practical applications,” says Ulrich Krull, U of T Mississauga’s vice-president and principal. “These innovations in chemistry that have been pioneered at UTM will potentially support a better quality of life, and perhaps even save lives, for many patients in Canada and around the world.”

“Professor Gunning and his peers from UTM are important partners ensuring Mississauga maintains and expands its competitive advantage, and sound reputation, in the important life sciences industry,” says Crombie. “Mississauga is Canada’s second-largest life sciences cluster by employment, home to over 430 life science companies employing over 22,000 people.  Over the last 10 years, our life sciences talent base has grown by 25 per cent.”