U of T scientists help discover how to turn off CRISPR

Researchers are part of an international team that has made gene editing safer and more precise, offering promise for new therapies

CRISPR genome editing is quickly revolutionizing biomedical research, but the new technology is not yet exact. The technique can inadvertently make excessive or unwanted changes in the genome and create off-target mutations, limiting safety and efficacy.

Now, researchers at the University of Toronto and University of Massachusetts Medical School have discovered the first known “off-switches” for CRISPR gene-editing activity, providing greater control and a much-needed “safety valve,” according to a new study featured on the cover of Cell.

“CRISPR is very powerful, but we have to be able to turn it off,” says Davidson. “This is a very fundamental addition to the toolbox which should give researchers more confidence to use gene editing.” 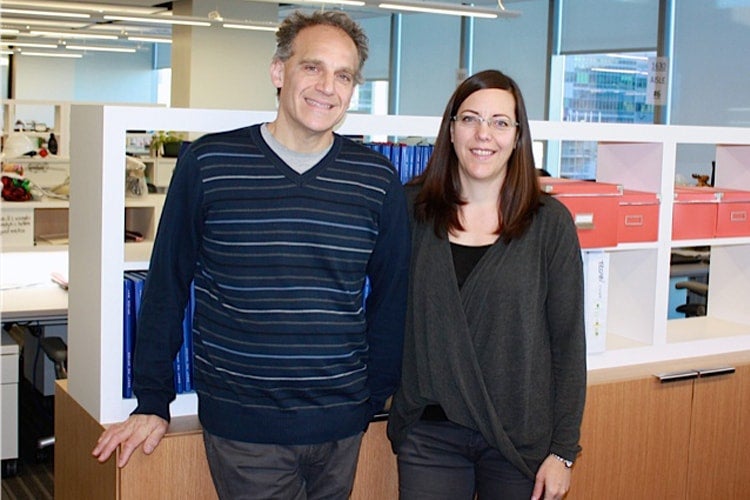 A simple and efficient way of editing the genome, CRISPR is changing biomedical research by making it far easier to inactivate or edit genes in a cell line for study. Work that used to take months or years to perform can now be done in weeks.

“CRISPR activity in these other cells, tissues or organs is at best useless and at worst a safety risk,” says Sontheimer. “But if you could build an off-switch that keeps Cas9 (the enzyme that cuts the DNA for editing) inactive everywhere except the intended target tissue, then the tissue specificity will be improved.”

The new paper not only identifies that “off switch” but it shows that CRISPR inhibitors have evolved naturally and can be identified and exploited.

The “off switch” will allow researchers to be more precise in their use of CRISPR. If they only want to use it during one stage of a cell’s life – such as when the DNA is replicating – they can turn it off during all other stages, reducing the chance of unwanted consequences.

A major way of delivering CRISPR into the body is through inactivated viruses that can be programmed to attach themselves to target cells. The challenge is that viruses can’t be engineered to be 100 per cent specific.

Researchers in muscular dystrophy, for example, want to target muscle cells. But a particular virus known for its ability to target muscle cells also attaches itself to liver cells, where it could cause unintended damage.  The “off switch” could allow researchers to release “anti-CRISPR” proteins into the body to turn off CRISPR activity in liver cells, offering a new layer of protection against mistakes.

“Knowing we have a safety valve will allow people to develop many more uses for CRISPR,” says Maxwell. “Things that may have been too risky previously might be possible now.”

The “off switch” could be used across the board for any application of CRISPR technology to target specific cells or tissues. For the researchers, the next step is to widen the “off switch” to include other types of CRISPR systems.